Sunrise on the pines


A rare optical phenomenon is ably analysed by a physicist and alpinist. Not that this will sell his book

As we came up a mountain path in the blast-furnace summer of 2003, the pine trees above us flared into a burst of silver brilliance. (See photo, which was taken in Switzerland's Berner Oberland.) This effect is best seen when you stand below a ridge, just within its shadow, keeping the sun slightly below the skyline. Then the trees nearest the sun light up with intensely bright fringes of light, while nearby motes and insects become drifting sparks of silver fire. The nimbus seems to burn brightest around pine trees, perhaps because their needles act as diffraction grids, bending the light around themselves into the eyes of the onlooker. 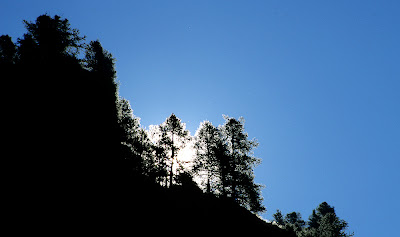 The phenomenon did not escape the ever-observant John Tyndall (1820-1893), a physicist now remembered chiefly for his work on atmospheric optics – and also for a glittering alpinistic career that included an inspection of the Matterhorn and the first ascent of the Weisshorn. Here is the account of sunrise on the pines from Chapter IX of his "Mountaineering in 1861":-

I must here mention a beautiful effect which I observed from Randa on the morning of the 18th of August. The valley of St. Nicholas runs nearly north and south and the ridge which flanks it to the east is partially covered with pines; the trees on the summit of this ridge as you look at them from the valley being projected against the sky.

What I saw was this: as the sun was about to rise I could trace upon the meadows in the valley the outline of the ridge which concealed him, and I could walk along the valley so as to keep myself quite within the shadow of the mountain. Suppose me just immersed in the shadow: as I moved along, successive pine trees on the top of the ridge were projected on that portion of the heavens where the sun was about to appear, and every one of them assumed in this position a perfect silvery brightness. It was most interesting to observe, as I walked up and down the valley, tree after tree losing its opacity and suddenly robing itself in glory …

Professor Necker was the first who described this effect, and I have copied his description in ‘the Glaciers of the Alps’. The only difference between his observation and mine is, that whereas he saw the stems of the trees also silver bright, I saw them drawn in dark streaks through the lustrous branches. The cause of the phenomenon I take to be this: You have often noticed the bright illumination of the atmosphere immediately surrounding the sun; and how speedily the brightness diminishes as your eye departs from the sun’s edge. This brightness is mainly caused by the sunlight falling on the aqueous particles in the air, aided by whatever dust may be suspended in the atmosphere.

If instead of aqueous particles fine solid particles were strewn in the air, the intensity of the light reflected from them would be greater. Now the spiculae of the pine, when the tree is projected against the heavens, close to the sun’s rim, are exactly in this condition; they are flooded by a gush of the intensest light, and reflect it from their smooth surfaces to the spectator.

Every needle of the pine is thus burnished, appearing almost as bright as if it were cut out of the body of the sun itself. Thus the leaves and more slender branches shine with exceeding glory, while the surfaces of the thicker stems which are turned from the sun escape the light, and are drawn as dark lines through the brightness. Their diameters, however, are diminished by the irradiation from each side of them.

John Tyndall's pen was as mighty as his alpenstock yet, sadly, his alpine books are more out of print than in. By comparison, Whymper's Scrambles in the Alps continue to sell and sell. The truth is that exquisite nature observations, combined with accounts of safe and cheerful climbs – as practised by Tyndall – don't fly off the shelves. It takes a spectacular accident – Whymper on the Matterhorn, Joe Simpson on Sula Grande – to move a mountaineering book into the mass market.

The glaciers of the Alps & Mountaineering in 1861, by John Tyndall (Everyman's edition)
Posted by Project Hyakumeizan at 6:11 PM

He did describe that effect with such poetry for a scientist!

So much beauty in those mountains, thank you for sharing it here.