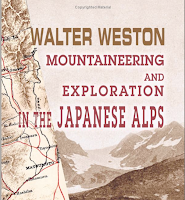 After a long hiatus, Walter Weston’s classic Mountaineering and Exploration in the Japanese Alps has returned to print in English – thanks to Elibron Press and Amazon’s booksurge, a print-on-demand service. The book was first published in 1896 but hasn’t been available in English for years.

An Anglican missionary, Weston first came to Japan in 1888. After a stint in Kumamoto, he served as chaplain in Kobe from 1889 to 1895 – this was also his most intensive period of mountaineering. Ascents of Yari-ga-take, Hodaka, Norikura, and Kasagadake, among others, are recorded in the book that has just been republished.

In Japan, Weston’s fame has burned undiminished. He is remembered, among other things, for helping to set afoot the Japan Alpine Club, founded in 1905, and is commemorated every year by a Weston-matsuri at Kami-Kochi. At least one of the two Japanese translations of Mountaineering and Exploration continues to be in print.

Walter Weston’s resuscitation coincides with an upsurge of foreign interest in the Japanese mountains – as reflected in cycling and hiking tours, foreign-run guiding services, and even the occasional book. Soon the time will be ripe for the publication of “One Hundred Mountains of Japan,” the English version of Fukada Kyuya’s classic vade-mecum to Japanese summits …
Posted by Project Hyakumeizan at 9:25 PM

A brilliant find, thank you for posting this!

Seconded! Strangely, I could not find the book on amazon.co.jp, so ordered it from the US site.