Whenever Takeda Hisayoshi appears in Nihon Hyakumeizan (One Hundred Mountains of Japan), he speaks with authority. Here he delivers an ex-cathedra statement about Tanzawa, a range of hills near Tokyo:-

Rigorously precise in matters of mountain science or literature, the professor never allowed an ill-considered opinion to pass, writes Fukada Kyūya, the Hyakumeizan author. I said in a book of mine … that all Tanzawa's valleys boasted wonderful streambeds and that these started right in the upper reaches of the valleys, not halfway down as in other ranges. That, I glibly hypothesised, was because the mountains were old, allowing time enough for all parts of the watercourse to be evenly eroded.

This caught Takeda's attention, who instantly despatched a postcard. "You suggest that streambeds in the Tanzawa massif are so estimable because the valleys are old. In fact, the very opposite is the case. It's rather that, during the earthquake of 1923 and the ensuing torrential rains of the following January, the ridges collapsed into the valleys and buried them in rubble … .yours etc." I still treasure that postcard.

Fukada seems to have been both abashed and honoured by the intervention of this formidable professor, his senior by two decades.

Takeda Hisayoshi was born in 1883 as the second son of Ernest Satow, the English diplomat. His mother was Takeda Kane (left), the daughter of a samurai family, who is described by the biographers as Satow’s common-law wife. They met during Satow’s first posting to Japan, from 1862 to 1883. As an officer in the consular and later the diplomatic service, Satow was never able to officially marry Takeda Kane, and she stayed in Japan when he moved to his next posting, in Siam. The family was reunited for five years from 1895, when Satow returned to Japan as Envoy Extraordinary and Minister Plenipotentiary.

Although Satow (right) kept his official and private lives rigorously separate, his diaries and letters show that he remained in close contact with this family. An entry for December 30th after his return to Japan records the following excursion with his sons, now fifteen and twelve years old:

Started at 10 with the boys for Shidzuura near Numadzu, a brilliant day, on foot and to the top of the pass by 11.20 reaching Karuizawa at 12.15. Started again at 1.5 and walked to Hirai where we rested half an hour, and off again on foot at 2.55. Here Saburō (Satow’s manservant) and Hisakichi (ie Hisayoshi) took kuruma, while we continued on foot thro’ Daiba and Yamashita, crossing a low pass just behind the village of Tōgo, and getting into the main road at Yamakiwa arr. at the Hōyōkan in Shidzuura at 5.15, standing betw. Saigō’s villa and the Kai-hin-In, a hospital. This is a new and elegant house. I gave a chadai (pourboire) of 5 yen and we were well treated in consequence. There is a fine grove of pine-trees on the sandy shore, and the position is a beautiful one. Temperature much warmer than Atami.

On this evidence, one may conclude that the Takeda boys inherited stout pairs of legs from their father. Earlier, Satow had roamed widely in the Japanese mountains. In the course of several summers during his first Japan posting, he’d traversed Okutama, visited Fuji, Asama, Haruna, Akagi, and Nikko-Shirane, crossed Tanzawa, climbed Ontake, Yatsugadake, Hakusan, and Tateyama, and made first gaijin ascents of Nōtori and Ai-no-take in the Southern Alps.

Among Satow’s companions on his mountain tours was Frederick Dickins (1838-1915), a naval surgeon-turned-lawyer and amateur botanist. Dickins had a particular eye for ferns, which he collected in Japan and sent back to the Royal Botanic Gardens at Kew. Ferns were big in Victorian England. Satow shared his friend’s interest in the flora; he later presented a paper on the cultivation of bamboos to the Asiatic Society of Japan.

Unlike Dickins, Satow never had a plant named for him. Rather, his most important service to science was to pass on his botanical enthusiasm to his second son – perhaps on mountain walks during summer retreats to Hakone or Lake Chuzenji, where Satow built a villa. Hisayoshi was 17 when his father was posted to China, leaving Japan for the second time. (He made one more visit, on the way home from China in 1906.)

After attending middle school in Tokyo, Takeda founded the Japan Natural History Society with some fellow students. He was already collecting alpine plants enthusiastically and published his findings in the Society’s journal. Meanwhile, he broadened his range from Nikko to Yatsugadake and then to Kaikoma, Togakushi, and Nikko-Shirane. 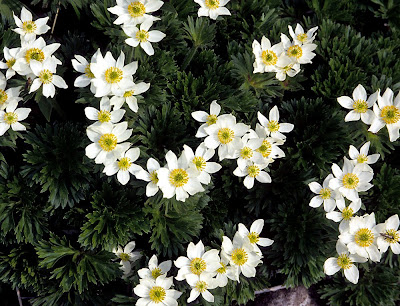 These activities brought him into contact with Kojima Usui around the time when Walter Weston suggested to the banker and writer that he should form a climbing association along the lines of Britain’s Alpine Club. As a result, in 1905, Takeda Hisayoshi became a founder member of the Japan Alpine Club. That also seems to have been the year when he cut loose in the big mountains; after a trip to Oze, he climbed Fuji, Yatsugadake, and Shirouma. Much later in his life, Takeda served as the JAC’s president for a few years.

From 1910 to 1916, Takeda studied botany in England, first at Kew and then in Birmingham. In the end, Satow sent him home to his mother, who was lonely. (Hisayoshi’s brother had been diagnosed with tuberculosis in 1900 and was advised to live in America, where he died.) His studies abroad provided the foundation for an academic career with appointments first at Kyoto University, then at the universities of Kyushu and Hokkaido. He published the first guide to Japan’s alpine flora, one version of which is still in print, as well as a literary tribute to Oze.

In Japan, Takeda is most famous for helping to defeat a plan to turn those famous upland marshes into an artificial lake. “What a place is Oze,” he wrote in 1925, “teeming with rare plants and the landscape of unusual beauty. From a scholarly point of view, it is an inexhaustible treasure-house of riches. As such, the government’s approval for plans to convert it into a reservoir, and this for motives of raw profit, strikes me as regrettable in the extreme. In fact, it is a national scandal. Is Japan’s landscape doomed to be despoiled at the hands of the Japanese themselves?” So Takeda thundered, and with ultimate success. Today, Oze is a national park and a bronze plaque at Hinoemata, a nearby village, preserves the eminent botanist's memory.

Takeda is also commemorated in Nihon Hyakumeizan. True, the professor makes no more than four appearances in the book but his influence pervades every chapter. When Fukada Kyūya, the Hyakumeizan author, passes through a field of flowers, we learn exactly what he saw; dandelions (タンポポ), or flowering quince (草ボケ) or purple corydalis (紫ケマン) or maiden violets (少女バカマ) – these from just the Ibuki chapter. This exactitude didn’t just happen; in the Kirigamine chapter, Fukada reveals how he brushed up his botany:-

In the summer, the plateau was covered in the head-high white florets of Japanese parsley (Angelica polyclada) and the orange blossoms of the daylily (Hemerocallis dumortieri var.esculenta). Whenever I went out, I liked to gather up a medley of flowers and bring them back to identify on a flower chart.

Fukada went up to Kirigamine just after being elected to the Japan Alpine Club in 1935, and spent the entire summer there. For a space of five days that season, the hut hosted a gathering of some twenty luminaries of Japanese mountain and cultural circles, many of them JAC members. Among them was Takeda Hisayoshi.
Hyakumeizan does not mention this week of walks and lectures, but it is easy to imagine that the distinguished professor impressed on the young author the need for rigour and accuracy in botany. Thus it was that Takeda Hisayoshi came to make a signal contribution to mountain literature.

Nihon Hyakumeizan by Fukada Kyūya in a forthcoming translation as One Hundred Mountains of Japan. Takeda Hisayoshi appears in the chapters on Tanzawa, Tanigawa, Shiomi, and Tekari-dake

Report on a meeting of the Asiatic Society of Japan: presentation by Ian Ruxton on the diaries of Sir Ernest Satow, British Minister in Japan 1895-1900
Posted by Project Hyakumeizan at 7:35 PM

It was interesting to know that his father, Satow , had influenced Hisayoshi Takeda when he was still a child.
Not much has been written about Kane Takeda. I wonder if she left any diaries of her own or any letters between herself and Satow.

Dear Anonymous (may I call you 'An" for short?) Many thanks for your comment, without which poor Takeda or his article would be somewhat lonely. To answer your question, Satow himself left a vast trove of diaries and letters - but I don't know if these included Kane's letters to him, if she wrote to him. She was a samurai daughter and must therefore have been highly literate. But the post in those days was probably not as fast as it is today....

A great read - I just finished 'Ernest Satow: A Diplomat in Japan' last Japan and it's amazing to read about this country pre-concrete etc. I didn't know he "married" a Japanese woman though! Nor that he had a famous son...
Thanks for the info and I'll definitely be back for more - a great place for references.
P.S. I returned your link at http://tombouquet.wordpress.com/

I too felt the post was lonely without comments, but it's difficult to comment on such erudite posts! As always, fascinating to read and appreciated, thank you.

Dear Tom, dear An, dear Hanameizan: many thanks for your kind comments. "Erudite"... my, my, the Captain's head swells. Anyway, I think the spirit of Takeda Hisayoshi has been mollified.

good post. i have read much on satow and find his life very interesting. but it always saddens me that he never took Kane and the boys with him... is this just my culturally insensitive, historically ignorant, but shameless sensitivity showing through???

Harrybroke: thanks for your comment, which probably says out loud what many (including this blogger) want to ask when they read the story of Satow. Most sources explain the separation as imposed by the Foreign Office rule that prohibited a diplomat from marrying a foreign national. Perhaps that isn't the full story, though. Perhaps a Satow researcher could enlighten us...