Captured by the Kurobe (2)

Kami-no-roka continued: towards the mid-way hut and a theory of sawa aesthetics

Next morning, we kept good time. Breakfast noodles and coffee downed in one long slurp, we splashed into the river at 7am. The valley still lay in shadow, the water was chilly but the last weather forecast we’d heard drove us forward. It had mentioned a typhoon sculling about in the southern ocean, still uncertain of its intentions. Back in the summer of 1924, heavy rain caught Kanmuri Matsujiro in this part of the river, forcing him to fight his way out of the gorge through vertiginous brushwood. The incident, he records, was “deeply memorable”. 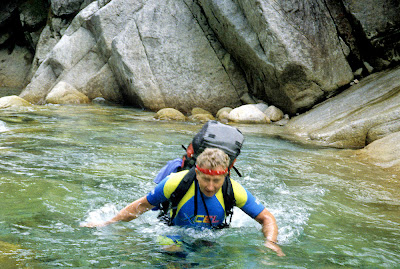 Veil cloud crept over the sky as we came to Kinsaku-dani, a rubble-filled gully sweeping down from the heights of Yakushi. A bank of pocked and pitted snow lay across its entrance, testifying to the avalanches that rake this side-valley all winter. No tree can survive here. In summer, a big typhoon will bring down rockslides that block the main river, as they did a few years after our trip. Then a small lake forms until the Kurobe can muster enough force to muscle the obstacle aside. The landscape here speaks as unsubtly about power – the force majeure of water, frost, and snow – as a May Day parade. 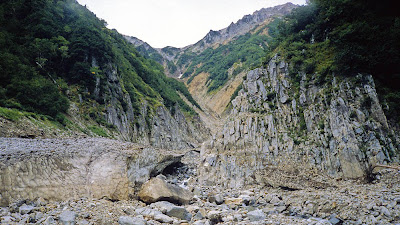 Miyamoto Kinsaku (1873-1927) was a famous guide from Toyama. He was the brother-in-law of Uji Chojirō, another guide who bequeathed his name to a rugged snow-valley. His client list reads like a Rolodex to Japan’s golden age of mountain exploration. Kinsaku was a porter to the surveyors who made the first modern ascent of Tsurugi in July 1907, as immortalised in a recent film.

In 1915 he guided Tanabe Juji and Kogure Ritarō over Tsurugi, Akaushi, and Eboshi-dake, and in 1920 he accompanied Kanmuri Matsujiro from Daira downstream along the Kurobe River. In 1922, he was with Imanishi Kinji and Nishibori Eijiro when they descended the east flank of Yakushi-dake, down the very side-valley which now carries his name. He was as tough and as gnarled as the terrain he pioneered. We hastened on, before the river found a new way to test our own mettle.

After pouring his debris into the river, Yakushi sends down a spur to squeeze it into another narrow channel. The current started to tug at us as we waded into a deep cauldron. Ahead I recognised the awkward corner that featured in Sawa Control’s intimidating video. But today the river was on its best behaviour and we breasted the deep water on tiptoe, buoyed up by our packs.

We had now entered the Oku-no-roka, the map told us. “Oku”, meaning ‘innermost’ or ‘beyond’, is a word with a certain resonance, as in oku-miya, the summit shrine on Mt Fuji. If not invented by Kanmuri, the idea of an “inner corridor” did receive his blessing: “It has become customary to call the reaches of the river above the Kinsaku junction the Oku-no-roka, and, to me, this name suits both the terrain and scenery,” he wrote.

It befits the geology too. Heading into a pool that was too deep to wade, I heaved myself out of the river onto a ledge sculpted from an exquisitely fine-grained white rock. I could imagine the river chain-sawing its way down through the mountains, through sheaves of grey andesite and dacite, through sandstone and rhyolite, until, after untold millennia, it reached this innermost motherlode of peerless Oku-Kurobe granite.

The savants tell a somewhat different story. In their version, the river stayed put, like a stationary buzz-saw, while the Hida block heaved itself upwards by 2-4 millimetres every year. The uplift summed to 1,500 metres in half a million years as the Kurobe gnawed its way into the rising mountains, strewing their wreckage across the floor of the Japan Sea. More rock from the Japan Alps may lie in those enormous submarine debris fans than remains onshore in today's mountains.

I paused on the ledge to admire the flowing shapes of the rock, the streamlined boulders and rounded shelves, all acknowledging the shaping spirit of the river. But not for long; my sawa boots could only just keep a grip on the polished slope. Behind me, a depth charge-like report echoed across the water; Sawa Control’s brillo-pad soles had lost adhesion on the film of water I’d left, precipitating him into the pool. He laughed and swam across it instead.

Yes, the mood had changed. Now we'd put several large tributaries behind us, the force of the river had perceptibly diminished. The guidebook too seemed to lighten up. Instead of warning us about possible workarounds or escape routes in case of high water, it now drew our attention to a “beautiful waterfall”. We splashed across the lower ledges of this cascade, admiring it from within, as if interacting with a trendy installation at the Tate Modern. 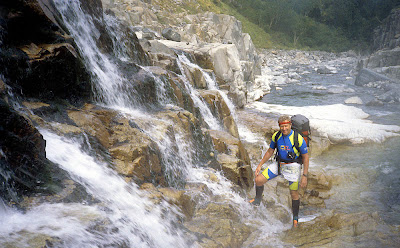 I was intrigued that the guidebook had waited until now to deploy the adjective ‘beautiful’ (美しい). We’d passed quite a few waterfalls and other scenic set-pieces further downstream, but none qualified for any epithet. Perhaps we (and the guidebook authors) had been too busy keeping ourselves out of trouble to appreciate the landscape’s finer points.

Here, I realized, was a splendid example of the eighteenth-century idea of the ‘sublime’ and the ‘beautiful’. The former refers to scenery that impresses you with a frisson of danger. The latter, by contrast, is enjoyed without any risk of getting yourself lunched. Sublimity was what the poet Wordsworth was tripping out on when he described the cliffs of a famous alpine gorge as “Characters of the great apocalypse”. His River Wye is merely beautiful.

Apply this concept to the Kurobe, I mused, and you could actually quantify the sublime and the beautiful. Flow rates of more than so many tonnes of water per second would result in breath-takingly ‘sublime’ scenery whereas the gentler currents of the Inner Gorge …

I was about to run these novel aesthetics past Sawa Control when he pointed to the sky. “Hmm,” he said, switching into the non-verbal code that we’d all picked up from our taciturn club president. I looked up and saw what he meant. The veil cloud had cleared, leaving the field to writhing streaks of cirrus. Something was happening up there.

We finished our lunch quickly and addressed ourselves to the home stretch. The sky was clouding over again and we’d seen enough characters of the great apocalypse for one day. After negotiating a stretch of boulder-strewn bank, we escaped gratefully onto a real path and made our way to the Yakushi-zawa hut. It was 4.30pm when we arrived and a few drops of rain were already falling from the dark clouds that, without our noticing, had surged over the western mountains.

Breath-taking. I'm going to pull out the map and trace your route, while I eagerly await the next installment!