Captured by the Kurobe (3) 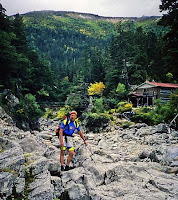 In the hut, it was Them and Us. To be sure, Koike-san, our host, had greeted us with perfect civility and then served us a palatable dinner. But then he and his three friends, each as weatherbeaten and grizzled as himself, withdrew to the other end of the room. Now they were hunched over their pickles and tea, embroiled in an intense discussion that all too clearly left no room for outsiders.

We’d forgotten about social structures in the Upper Corridor. For two days, it had been just the River and Us. Now we had to deal with human society. A foreign journalist once speculated that nobody really runs Japan. If you cut through the political parties, the bureaucracy, the policy advisory groups, the study associations, he suggested, you would finally break through into a kind of vacuum, empty and silent except, perhaps, for the sound of one hand clapping.

Clearly, the journalist had never visited the Kurobe. Seemingly empty, the wilderness is held in thrall by an astonishingly dense web of interests. To start with, there’s the power company that runs the dams downstream and, in the 1960s, almost managed to build yet another dam just a few hundred yards downstream from the hut we were sitting in. Then there are the public works office that puts up erosion defences and the ministry that officiates over national parks to name but a few.

But who was the cabal sitting across the room from us? And what did they represent? I could see Sawa Control itching for answers and, unlike me, he wasn’t going to wait for them. A flagon of Suntory Vile appeared on the table of the Kurobe Four, giving my companion his chance. In a lightning countermove, our bottle of Armagnac was played to centre table. “Ikaga ..” opened Sawa Control with a phrase of exquisite politesse.

The ploy worked. Koike-san introduced his companions as the local mountain rescue team and we were invited over to their table. As we were all Us now, the bond sealed with mutual toasts of brandy and Old Vile, logically a new Them was required. It was soon found: “If you have one,” advised the rescue team, “make sure you have an accident on this side of the mountain.” Our helicopter pilots, they said, will fly in the very nap of the earth until they find you, while Theirs – from over the other side of the mountain – they’ll just circle once high up, then skive off home.

We nodded, and took another sip of Armagnac, or was it Vile. Nothing personal, you understand, but you can’t expect much from the guys from the other side. They’re Them, you see. Our new friends slipped us another survival hint: if you’re smoking your fish down by the river, make sure you set your tent a good distance away, or the bears might act up when they stroll over to investigate the delicious smell of roasting iwana.

Our hosts were so fond of this trout-like fish that they’d set up a society to love it, they told us. How was that again? Back in Kanmuri’s day the rockpools teemed with iwana, but for some reason they’d become scarce in recent years. The iwana lovers tried to keep fishing within limits – I was glad that no rods were poking out of our packs – and they took fish out of the main river in order to restock the tributaries.

Others had taken a different tack. A cosmetics firm from Gifu – did I really hear that right – had just tried to bring in iwana fry from another river by helicopter. Fortunately, the Iwana Appreciation Society had managed to foil this plot; no alien fish were wanted in this river. They wouldn't mix well with the ancient stock that, with its bloodline unpolluted, has inhabited the Kurobe for ages eternal etc.

It was outrageous, we assented, that Outsiders should meddle with Our River. Speaking of which, I’d just noticed a yellowed photo on the wall of the Kurobe in full flood. On our way up the river, we’d seen tree trunks and rafts of driftwood lodged, it seemed, impossibly high above our heads on rocky ledges. Now the photo confirmed what the wreckage had been trying to tell us.

What about that typhoon? The rescue crew were sanguine. The storm’s eye had missed Honshu and was now sailing up the Japan Sea. We’d be all right, they said. It wouldn’t tangle with the Northern Alps. Anyway, it would be our problem if it did. On that note, we went to bed. It was high time. I could no longer tell the difference between Armagnac and Old Vile.

(Continued)
Posted by Project Hyakumeizan at 10:37 AM

Your account reminded me that it's the people you meet in the mountains who make the trip interesting.

Re. the iwana, overfishing is certainly one cause - witness the rows of rods poised for the first cast at noon on the first day of the season in early March. But all those damn dams far up the headwaters have a lot to answer for.

Somehow I think that typhoon may come back to haunt you, and I'm waiting on the edge of my seat for volume 4 of this fascinating account.

I'm assuming the 'us' vs. 'them' was referring to Nagano vs. Gifu (or is it Nagano vs. Toyama). Kumo-no-daira sits near the crossroads of the 3 prefectures, so I'm curious to know which prefecture the mountain rescue team belonged to.

Wes: no, we haven't heard the last of the typhoon. As to exactly where the "Other" helicopter pilots come from, "an ox sits on my tongue" as it says in some fusty old classic.... :)

Gotta say, like Chris, you have a knack for telling a really good story. I love how you left this post off at the end. Great writing. Will be first in line for the book!