Travelogue continued: a social visit to the Tanzawa mountains uncovers some changes

25 November: When, after many years, you climb a mountain with an old friend, you’d expect the friend to be changed more than the mountain.

Yet here was Matsuo-san, swinging a heavy pack onto his shoulders, just as he did on our snow-holing expeditions a decade ago. Since then, he’s retired or rather devoted himself full time to mountain photography. Possibly his pack was even heavier now; these days, the compleat photographer carries both digital and film gear, together with a vast armoury of lenses. 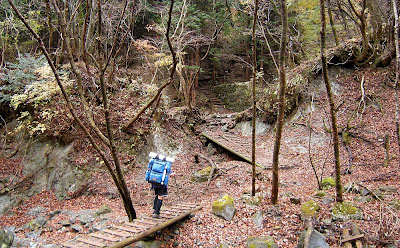 Privately, I doubted if those cameras were going to get a look in. A cloud bank with the density of miso soup had socked in the Tanzawa hills. But we were on our way to Kusano-san’s hut on Nabewari Hill, which faces Mt Fuji, and Matsuo-san had to be prepared. A man whose mountain calendars sell 10,000 copies a year has a reputation to live up to. 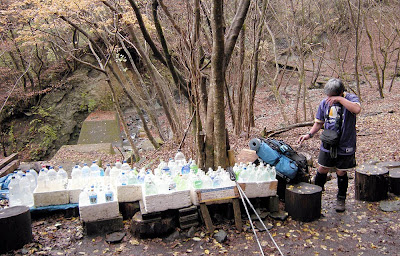 At the foot of the hill, we found a table piled with water bottles and a hand-written sign bidding us to carry up to the hut as many as we dared. 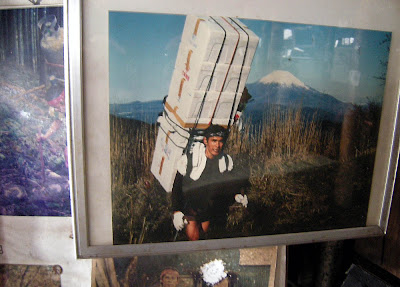 In the old days, Kusano-san used to port immense loads up Nabewari (he maxed out at 114 kilos); now his guests are invited to share the burden.

Obediently, we loaded up. Perhaps we overdid it; an hour or so later, I started to suspect that tectonic forces had raised the hut by several hundred metres since our last visit. 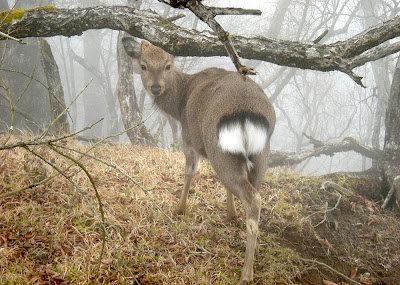 It was then that we came across the deer. Grazing by the side of the path, they hardly bothered to notice us. Like chimpira lounging by the curb in Kabuki-cho, they grazed as if they owned the place. Strange, I observed to Matsuo-san: you never used to see deer this low down. 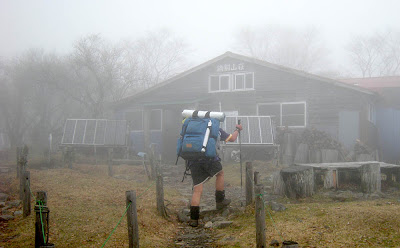 The hut materialised out of the fog and we stumbled gratefully inside. Kusano-san looked much the same, though he doesn’t pack quite as much uphill as he did when he carried up every beam, plank and pillar that went into this hut. 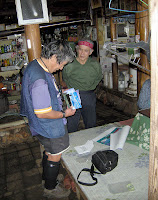 After ordering two bowls of his famous Nabewari udon, we asked him about the deer. Kusano-san confirmed what we’d seen: their numbers have increased remarkably. Meanwhile, the reverse is true of their hunters: – the police are reluctant to give out new licences, so that the gun-owning population, like Japan’s, is ageing. Sometimes, hunting parties lack the strength to carry out a dead animal and just leave the carcass to rot where it fell. Kusano-san has several times happened on these grisly scenes. 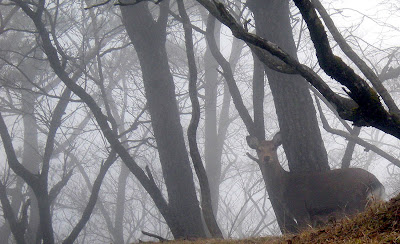 And perhaps because the deer have spread, so have leeches – these were practically unknown in the old days, except, we’d heard, in the sawas of aptly named Leech Peak ( Hiru-ga-take). Now leeches are everywhere, Kusano-san said. They even batten on his car when he drives home. If he’s not careful to pick them off the tyres when he parks – as many as 20 or 30 can be lurking there – they will creep after him into the house.

Not all the news was bad. The beech trees near the hut, unlike their brethren on To-no-dake, haven't taken ill from the acid rain. And a radio tagging project suggests that 33 bears still inhabit the Tanzawa range. But don't worry if you hike the ridge paths: the bears prefer to haunt the river gorges.

We washed down our noodles with a coffee and went out to continue our survey. The fog hadn’t lifted. On the ridge behind the hut, the forest understorey had been nibbled almost to the bare earth. There used to be knee-high panda grass here. Yes, this mountain had changed quite a bit in ten years. 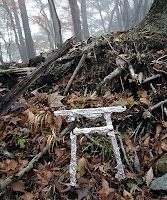 Stopping for a breather on the way down, we noticed a miniature torii by the path, its beams wrapped in silver foil. I turned to Matsuo-san for an explanation, but he’d never seen anything like it either. "Lurking under its trackless forests, the mountain exuded an air of mystery in those days," says Fukada Kyuya in the Tanzawa chapter of Nihon Hyakumeizan. Tenacious as the fog, some of that mystery still clings to these hills.
Posted by Project Hyakumeizan at 11:27 AM

Sad, as if the mountain were a carcus left to rot, like the deer.... One of my Followers is Sapphire (see photos)...I think the exact title of her blog is Through the Sapphire Sky. Anyway, she's Japanese and has a lovely blog that centers on various aspects of Japanese culture. I think you would enjoy her blog.

Many thanks for that hint, Kittie. Have added Sapphire's estimate blog to my blogroll...

I remember seeing magazine photos of Kusano-san carrying packs that towered far above his head. Did he start the Nabewari water race as a way of getting water for his hut?

I enjoyed reading, thinking fondly of the days when you raced up the hill. Thank you very much. I hope it still is a beautiful mountain.

In the south of Fukui, almost all the grass except poisonous ones have been eaten by deer, and we see the same problem there as in Tanzawa. I heard from a friend that they do not live in places where it snows above their leg height, so that they can't live in the north of Fukui. However, people have started to spot them in the north, too, recently. We have less snow here these days...

Hanameizan: thanks for reminding me - I've added a photo of Kusano-san doing one of his maximum lifts. As for whether he actually started the water race, I'm not sure. Ask him next time you visit. What he told us is that he's distanced himself from the Bokka Ekiden in recent years, preferring not to overload the paths around his hut. So the race now ends one stage short, at Hanadate.

Sunnybeauty: that's ominous news you bring from the North Country ....