Travelogue concluded: the avatar of a Famous Mountain is present even in the middle of Tokyo

24 November: I’d passed the little shrine in Ogikubo a dozen times over the years, never giving it a second glance. Now, on the way to dinner with old friends, I noticed the characters inscribed on the stone pillar: White Mountain. 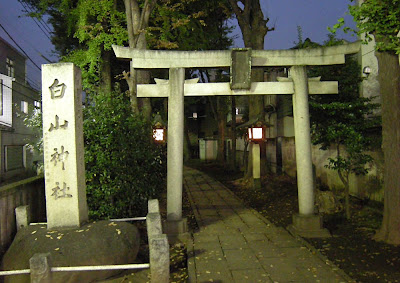 So this was a Hakusan shrine, taking its name from the 2,702 metre-high volcano on the Japan Sea Coast. The mountain's most recent eruption was in 1659, meaning that, even now, it smoulders on beneath its woods and streams. In its eruptive prime, 100,000 years ago, Hakusan may have topped out at three and half kilometres, making it possibly the highest mountain in all Japan.

Hakusan lays a more certain claim to fame as the first of Japan’s high mountains to be climbed. It was opened in the first year of Yōrō (717) by the monk Taichō. He is said to have meditated in a lava cave below the summit, which can still be visited. (Picture of cave below by courtesy of Hakusan no Shizen blog.) Perhaps it was there that he was granted his vision of the eleven-faced Kannon, the goddess of mercy. 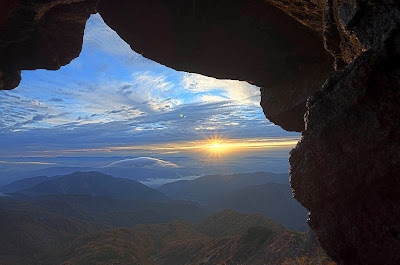 By the middle ages, Hakusan was established as one of Japan’s top three sacred mountains, alongside Fuji and Tateyama. Today, there are two thousand or more Hakusan shrines in Japan, considerably outnumbering the Sengen shrines dedicated to Mt Fuji.

Over the centuries, quite a few people have sought counsel or comfort from Hakusan. One of them was Fukada Kyuya, the Hyakumeizan author. In the relevant chapter of his most famous book, he records how, when he came home after the war and led an isolated, fugitive life for three years and a half, it was Hakusan that consoled him. “I could write for ever about Hakusan, so much has this mountain given me,” he concludes.

The little shrine in Ogikubo offered sanctuary of a sort too. Sandwiched between a shopping street and a main road, it was a grove of silence and shadow amid the city's din. Surely there was time for a quick look before dinner… But before I could move, a man in a business suit walked quickly out of the shopping street, past the raucous pachinko parlours, and up the stone path under the trees to the shrine. I turned away. On second thoughts, it wouldn’t do to be late for dinner. 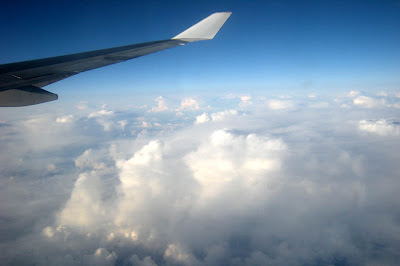 Posted by Project Hyakumeizan at 9:09 PM

Sorry, I haven't read this yet but you once asked me about something I wrote about the first person to climb Kitadake and how I had read that Kojima Usui had found a piece of iron on the summit with a date from 1795 inscribed on it. Here is the link to the site.

You certainly had a very productive visit to Japan, yielding no fewer than 17 postings. Why don't you move back here?

Peter: many thanks for that invaluable reference - food for a future posting, no doubt.

Thank you for this interesting post. I haven't noticied that Hakusan Shrines(branch) are in the Kanto area. I often see Sengen jinjyas. When I go to Ogikubo next time, I'll visit the shrine. Your photos are splendid! I love them. By the way, have you seen the movie, "Tsurugi-dake 剣岳"? I saw it at a theater last summer and found it fabulous.

As for Tsurugi-dake, the film, yes, I have the DVD right on my desk here. Will write up a review posting one of these days. It's a pity that it hasn't (yet) been distributed outside Japan. The story is interesting and the scenery is stunning. Almost better than being there ....

Oh, no! You're leaving Japan. I so enjoyed your adventures, insight and wisdom gained. The photo from the cave is symbolic of much. When I left Okinawa, I took a photo of the plane's wing and clouds. So understand this. Anyway, I hope you have another series. And I am happy to see that you linked to Sapphire's blog. What a jewel!

Kittie: again, many, many thanks for the kind words and for the hint to look at Sapphire's blog, which is indeed a treasurehouse of interesting insights for all students of nature. As for leaving Japan, one can only quote the Governor of California: "We'll be back!"