Hana Hikes the Hyakumeizan: Trail-running the 100 mountains of Japan with a dog. By Julian Ross. Published by blurb.com, 2010, 160 pages, illustrated in colour. 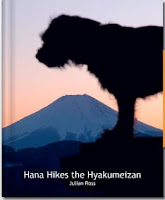 Back in 1964, when he published his appreciation of Japanese mountains, Fukada Kyuya had no intention of creating an official list for peak-baggers. But, half a century later, that is what the Nihon Hyakumeizan have become: a giant circuit of one hundred mountains. They are even marked on the hiking maps. Some people climb them over the course of a lifetime, others strive to set speed records.

Julian Ross started out in the latter camp, aiming to beat a previous time of 66 days. Soon, though, he discovered that hiking – or rather trail-running – the Hyakumeizan was more fun when accompanied by his dog. Thus it would be the curious destiny of Hana, an English-born border terrier, to become the first dog to reach the summits of all one hundred mountains. And to become the star of Ross’s book about their adventures.

There was one hitch to this plan. Although not banned outright, dogs are not particularly welcome in Japan’s national parks and mountain areas. Some entertaining passages of “Hana Hikes the Hyakumeizan” describe the various subterfuges necessary to smuggle the dog past tour guides, cable-car operators, and the priests of summit sanctuaries. (Many of Japan’s summits are shrines.)

To avoid unwelcome attention, Ross and Hana often hiked at night. They even climbed Yari, Japan's fifth highest mountain, in the dark. Sometimes, though, Hana meets with tacit support, as in this incident on Kashimayari at 4am:-

“Often bring your dog, do you?” (a hiker asks)
“Yes, it’s no fun without.”
“Some people don’t like dogs in the mountains, you know.”
“That’s why I’m climbing at night,” I answered defensively. Was he for or against?
“I want to bring my two dogs, but I daren’t in the Alps.” 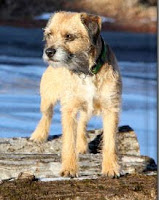 What is lost by hiking at night is more than offset by these varied encounters with hostile and friendly fellow mountaineers. In the end, the friendly conversations far outweigh the other kind. In this, “Hana Hikes the Hyakumeizan” resembles a modern version of Robert Louis Stevenson’s “Travels with a Donkey in the Cévennes” (1879), where Modestine, the pack animal, brings about many a telling interchange with the local people.

Unlike Stevenson, Ross was equipped with a digital camera, which he uses to good effect. The layout and print quality do full justice to the text and photos, allowing something of the presence and dignity of these famous mountains to come through. That is, after all, what the original Nihon Hyakumeizan was about. I like to think that old Fukada Kyuya might have greeted “Hana” with a nod and a smile.

“Hana Hikes the Hyakumeizan” is available from blurb.com

More about Hana and the history of canine alpinism in Japan
Posted by Project Hyakumeizan at 6:08 PM

Lovely review. You made me want to read the book. Doesn't Hana mean Flower in Japanese...a specific flower, I think...it's been awhile. I have high hopes you'll publish your climbs, the spiritual/historical side of it, perhaps. Your voice is very good at this.

Thanks for reading, Kittie, and for your encouragement. I do recommend Hanameizan to anybody who is interested in the Hundred Mountains of Japan and especially those who want to take their dog up them.

As for my own publishing plans, it isn't my own climbs that I want to publish but the translation of the "One Hundred Mountains of Japan" book by an author called Fukada Kyuya. Difficult to explain why, but the book has a compelling kind of charm. Will keep you posted on publishing prospects on this blog....

Greetings form Shibata, Niigata! What a well-written, content-rich, beautifully crafted blog! I was actually wondering, or do I ask too much for a recommendation on a hike in my area? Also, would you happen to know of any hiking clubs in Japan?
Thank you, thank you!

Maririn: thank you for your kind words. And congratulations on landing in Shibata, Niigata - what a wonderful situation, nestling between the sea and the mountains. If I were living there, I would perhaps try to get hold of a copy of the Lonely Planet guide to Hiking in Japan, just for background reading. Then I'd head to my local bookstore to see what local hiking guides and hiking maps they had (these would be in Japanese, of course. Then, most importantly, I'd ask friends and acquaintances to put me in touch with a local hiking or mountaineering club - there will be several in a town the size of Shibata. Then I'd do some hikes. Then I might start a blog about them. And, you know, that could lead to an English-language guidebook to hiking in Niigata. You have several of Japan's "famous mountains" within an hour or two - the Asahi range, Naeba and Makihata-yama to name but three. You can read about Makihata on this blog at

The post is about skiing and sawa-nobori but there are also hiking trails up the mountain, once the snow has melted.

Oh yes, and if you want to read about Niigata winters as they were two centuries ago, see if you can get a copy of Suzuki Bokushi's "Tales of the Snow Country" (try second-hand on Amazon). Wonderful book.

Look forward to your blog!

Wow, thank you! If you're ever in the area, let's go hiking together! ;)