A film about a pioneering ascent plays fast and loose with the facts – yet captures the spirit of Japan’s golden age of mountain exploration.

The episode has passed into Japanese mountaineering lore. On the 13th of July 1907 (Meiji 40), a government survey party reached the summit of Tsurugi, a mountain as sharp-edged and rugged as its name suggests. It turned out that they were not the first to visit what they had assumed to be an untrodden peak. In fact, the mountain had been climbed long before, as the surveyors realised when they discovered on the summit a spearhead and the tip of a priest’s staff that proved to be centuries old. 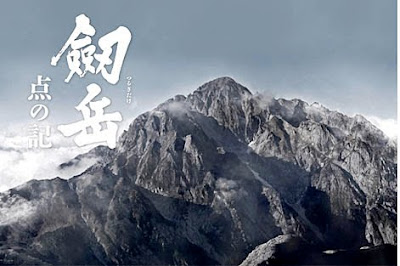 Many years later, the meteorologist/novelist Nitta Jiro wove this incident into a novel that, more recently, has begotten a film. The storyline of Tsurugidake – Ten no Ki is straightforward: Shibasaki Yoshitaro, the surveyor in charge of mapping the Tsurugi area, is ordered by his military superiors to make the mountain’s first ascent before the gentlemen amateurs of the Japan Alpine Club get there. Nothing less than the Imperial Army’s prestige is at stake. 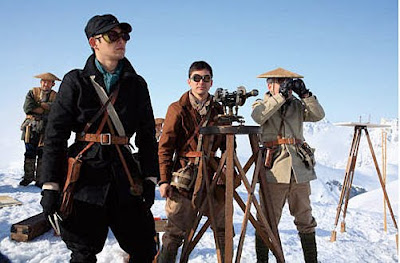 Although Shibasaki is more interested in cartography than kudos, he has no choice but to obey. He signs up local guides Uji Chojiro and Miyamoto Kinsaku and together they battle their way through rockfall, avalanche and storm towards the summit. On the way, they rescue a mountain mystic, and cross paths with the Japan Alpine Club group and its leader, Kojima Usui.

Beating the amateurs to the summit gets the surveyors no credit: the Army staff are miffed that a monk apparently reached the summit more than a thousand years before. By contrast, Kojima Usui is a good loser: in the closing scene, he congratulates Shibasaki (by semaphore!) for opening the mountain in a feat “that will be gloriously reported to posterity”. 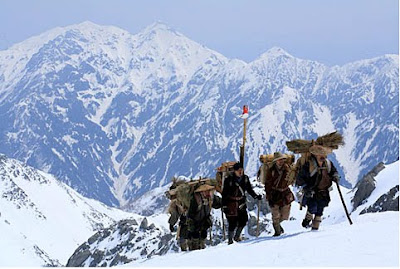 It’s a ripping yarn, masterfully filmed, that sometimes doesn’t stray far from history. For the facts behind this tale are as remarkable as the fiction. The real Shibasaki Yoshitaro (1876-1938) was born in Yamagata, in modest circumstances. He made up for lack of schooling by self-study, showed a gift for numbers and, during his army service, passed the difficult entrance examination for the surveyor’s corps that was then part of the Army General Staff. 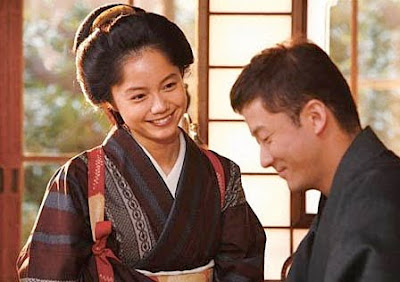 From 1904, he continued to work for the triangulation department of the survey as a civilian official. And, in July 1907, his party of surveyors really did make the first and second modern ascents of Tsurugi.

Awkwardly for the screenplay, Shibasaki delegated the actual first ascent, on July 13, to a subordinate and only climbed the mountain himself on the second visit, which took place on July 27 or 28. Nor is there any evidence that Chojiro came to the summit on July 13; indeed, religious scruples may have induced the guide to stop at the col of this "forbidden mountain".

But, to leave these tedious details aside, the surveying was spot-on: using a Carl Bamberg theodolite weighing 60 kilograms, Shibasaki came up with a summit height of 2,998.02 metres. The latest GPS-based techniques make it exactly 2,999.0 metres. 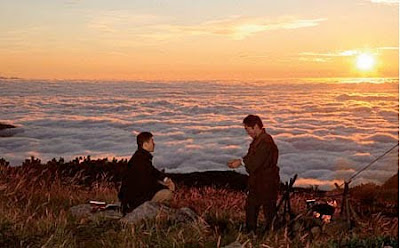 Where the screenplay of Tsurugidake veers furthest into pure fiction is in its depiction of Kojima's crew. The real Kojima Usui (1873–1948) did play a prominent part in founding the Japan Alpine Club in 1905. In the summer of 1907, however, history relates that he was exploring the Southern Alps of Japan, not the northern range in which Tsurugi is situated. So he was in no position to send Shibasaki semaphore messages, still less to start a race with him. 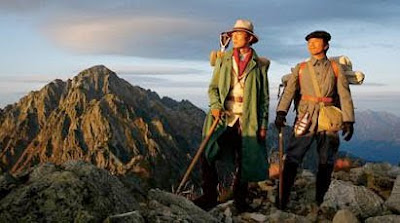 Yet a grain of truth might underlie this fetched-up tale of mountain rivalry. When, in 1902, the real Kojima Usui set out to climb Yari-ga-take, another high peak in the Northern Japan Alps, he was completely unaware that anybody had ever climbed the mountain before him. Imagine his surprise when he found on the summit a survey marker installed just a few weeks before by the Army surveyors. This incident was probably known to Nitta Jiro, who might have decided to weave it into his plot. 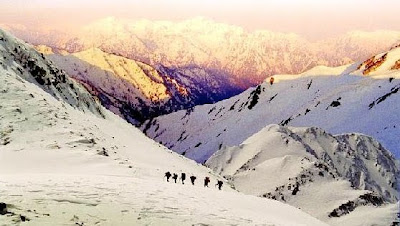 Whatever the merits of its storyline, Tsurugidake – Ten no Ki captures the essence of Japan’s golden age of mountaineering. Everybody is there: the mountain mystics who first opened Japan’s mountains, the surveyors who put the mountains on the map, the pioneers of the Japan Alpine Club, the guides who found the way, and even (if you look carefully) the books of authors such as Shiga Shigetaka and Walter Weston who first promoted modern mountaineering in Japan.

That golden age is dead and gone but anybody who wants to relive it could do worse than get this DVD and soak up 139 minutes of magnificently mocked-up Meiji-era mountaineering.

The title, Tsurugi – Ten no Ki, translates as Mt Tsurugi – Tale of the Triangulation Point. At some overseas film festivals, the film has been shown as The Summit: A Chronicle Of Stones to Serenity. The foreign distributors may have a point when they changed the title: few films about surveying parties have played to packed houses in Peoria. This one, though, deserves a wider audience.

Biographical information about Shibasaki Yoshitaro is from a paper by Aeka Ishihara of Keio University on “Das Dreiecksnetz: Gauss und die japanische Landvermessung in der Meiji-Zeit”, December 2007 (German-language version of a Japanese original).

Information on Kojima Usui from 多才なアルプニスト：小島烏水 article by 瀬戸島政博 The Japan Journal of Survey, September 2008

All images from the film, courtesy (indirectly) and copyright of Toei/Fuji Television Network

And many, many thanks to the Senpai for providing the DVD!
Posted by Project Hyakumeizan at 9:07 PM

This was particularly illuminating, thank you, especially after (rather than before) simply soaking up the scenery and story in a local cinema last year.

Thank you so much for this nice review! I saw the film last year at a theater. I didn't know the facts behind the tale; Kojima's crew hadn't started a race with Shibasaki, etc. What a surprise!
Although the film has a fictional narrative, I think it is a masterpiece. I remember the summit of Tsurugi I saw when I enjoyed the view at the summit of Hakuba when I was in high school.
By the way, I heard Hō-hoke-kyo(Uguisu) and Kyo-kyo-kkkyo-kkkyo-kkyo (Hototogisu: Cuculus poliocephalus) in Kamakura late in May.. Hototogisu's singing was beautiful too!

Excellent work providing the real story behind the movie. I'll keep my eyes out for the Weston books on the shelves the next time I see the film (luckily a student of mine gave me a copy on DVD)

I guess the overseas versions have English subtitles? The domestic versions over here are subtitled in Japanese only.

Wes: you'll glimpse the Weston book (English edition) in Shibasaki's bookshelf - just behind a close-up of Mrs Shibasaki, in fact. Highly unlikely for 1907, though - the real Kojima Usui records that Weston's book was almost unobtainable in Japan at that time, so that very few Japanese were aware of his mountaineering & explorations. It was only later that his book was translated...

As for subtitles, I don't think the film has been done into English yet. Pity ...

As I mentioned in my message to you, I watched the film in the theatre more for the scenery than the history, though with both Yama-to-Keikoku and Gakujin magazines doing features on both the movie and the mountain, I was able to get a good idea of the background story.

I didn't know that Kojima and Co. Were actually not in the neighbourhood at the time, and in a way, knowing that detracts from the movie for me. Still, keeping in mind that the movie is based on a book and not history, I can say that I really enjoyed watching it.

Finding that ancient spear head on the mountaintop reminds me of other tales I have read where would-be first ascenders are later proven not to be the first. Didn't Weston find a cairn on Jonen? And how about that site I found that said Kojima found a piece of iron on Kitadake with a date inscribed a hundred years prior to what was previously believed to be the first ascent. I have read that before many documented first ascents, numerous peaks had been climbed by hunters, monks, and forestry service workers.

A final two points about the movie. Over herein Japan the English title was given as "Tsurugidake: A Chronicle of Stones," which I thought had a nice sound to it though perhaps a bit misleading. Also, the dramatic poster image of the climbers ascending the Ushirotateyama range, probably somewhere near Shiroumadake or Karamatsudake, is lovely to behold but unrealistic to consider as no one intent on climbing Tsurugi would be going in the opposite direction in a range many miles away.

Oh, and I forgot to add that I was put off a bit by Kojima and Co. being portrayed as a bunch of arrogant, foreign-gadget-buying, Swiss-biscuit-munching, camp-lounging snobs.

Peter: many thanks for your review of the review. I feel that the key to the way that history was "creatively altered" probably lies in the afterword to Nitta Jiro's original novel - which I don't have available. Apparently, the topic of Shibasaki was suggested to Nitta by people who thought that Shibasaki had never been sufficiently recognised.

As for the portrayal of Kojima Usui, I can only agree with you. It is tendentious! I am in the process of writing a rebuttal, which is provisionally entitled "Was Kojima Usui a fop?" As you can imagine, the answer will be "certainly not"... Another oddity in the film is that the fictional Kojima is accompanied by Okano Kinjiro - who certainly went with him to Yari in 1902. But, by 1907, Kojima was exploring the Alps with other friends entirely - mainly the founding members of the Japan Alpine Club, as far as I can ascertain. But, never mind, the movie did capture something of that golden age, even if it mixed up the facts a bit ....

Beautiful scenery, stunning cinematography and a ripping yarn which could have been tightened up considerably with about 15 minutes of excess footage on the cutting room floor. Also somewhat let down by the excessive use of Vivaldi's Four Seasons as the soundtrack. Well worth seeing though.

I climbed Tsurugi Dake back in 2006, and I was amazed by the beauty and difficulty of the ascent, and that was even with the handholds put in place many year ago. I'd love to watch this movie some time so I can relive my ascent.