A nightingale is singing. What am I doing here, sleeping on tarmac? I open my eyes and see a black bulk, inches away. It resolves itself into a Bridgestone snow tyre. Events snap into focus. We’re here to climb Hiuchi, the volcano that rises above the Oze marshes, which is why, yesterday evening, we sent our cars skimming across Tokyo Bay, the bridge lights streaming back like tracers.

Around midnight, we arrived in a carpark outside Hinoemata. According to Nihon Hyakumeizan, this village lies deeper hidden in the mountains than any other in Japan. It used to be so poor, some say, that brides brought their own coffins as part of their dowries. 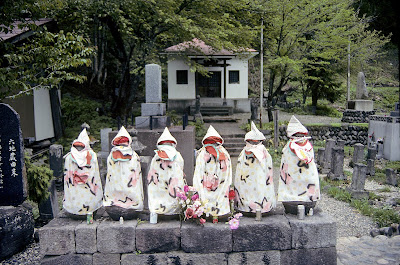 As the Gunma lads had already arrived, a “konpa” ensued. The party lasted as long as the beer, and then we sacked out in tents or, in my case apparently, on a Thermarest alongside a weatherbeaten Subaru. 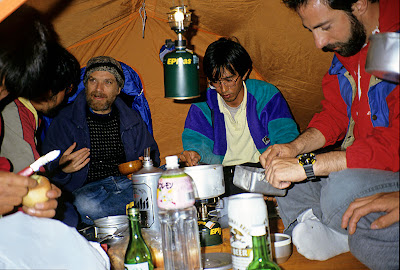 Hō-hoke-kyo; the bird is singing. No, not a nightingale; this is an uguisu, a bush warbler said to mimic the Lotus Sutra in its song. Fully awake, I remember the rule: first man up, light the stove. Without getting out of my sleeping bag, I pump the MSR, prime and light it. Soon its roar drowns out the uguisu’s devotions.

Reluctant figures emerge from tents. Breakfast is hurried: the weather forecast gives us only a short window. And then there is that four-hour drive back to Tokyo. The snow being patchy down here, we tie our skis onto our packs for the climb and set off through a grove of old-growth trees. 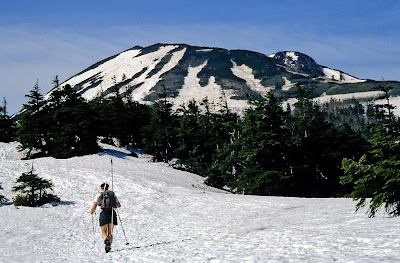 What kind of trees? Takeda Hisayoshi would have known. The botanist first visited Oze in 1905. In point of fact, he wasn’t really a botanist yet – just a young man recently graduated from an elite high school. He inherited his interest in plants from his father, the English diplomat Ernest Satow, who had roamed the mountains of Japan in the company of an expert plant-hunter.

Takeda had learned about Oze in an article by a botanist who’d found plants otherwise known only in Hokkaido. He wanted to climb Hiuchi from the eastern side, but the guide would have nothing to do with this plan. Even experienced mountaineers would get themselves into trouble there, he said.

So, on 6 July, the party set out from Yumoto on the normal route, over the Konsei pass. A porter helped carry the plant presses. Reaching Oze moor on the third day, Takeda and his companions wanted to botanize. But the guide and porter hurried on ahead. The path was hard to follow; here and there it faded out altogether. The party slipped and slid through the mud. They waded a river and struggled up the far bank. The evening mists were rising when they reached the Hinoemata hut. 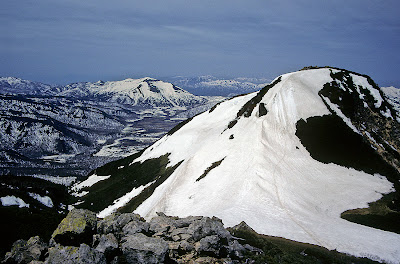 Japan has high mountains and it has deep mountains, wrote Takeda in Oze to Kinu-numa, the book he later devoted to these moorlands. The high peaks, even rugged Tsurugi, have now been climbed, robbing them of their mystery. But that still leaves the deep mountains (深山), where “no roads nor even forest tracks can penetrate, where you find your way along paths as faint as dreams, or along narrow ways, clambering over rocks and tree roots – such are the rigours and the rewards of the deep mountains.”

In 1905, Oze was still as remote and untracked as anybody could wish. Indeed, Takeda’s party never reached Hiuchi’s summit, though they struggled about in the panda grass on its lower slopes: “The hardest climbing I ever experienced,” the botanist wrote. They spent a final night under a sheet of oil-paper draped over “a horse chestnut bough” (トチノキ). Not even the exigencies of a bivouac could blunt Takeda’s taxonomical precision.

Then they had to go home. Yet Takeda was not disappointed. He’d found a “treasure-house” of botanical riches, including a violet (ezo-murasaki) previously seen only in Hokkaido. His first visit to Oze would be written up for the first issue of Sangaku, the journal of the Japan Alpine Club, which Takeda would help to found in the autumn of that same year. 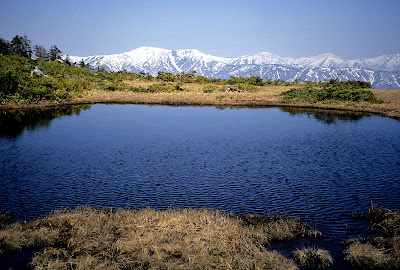 Emerging from the wood, we pass a shallow pond that transposes the sky into a deeper shade of blue. For the first time, we can see our summit: “As you stand on nearby Ayame-daira,” writes Fukada Kyuya in Nihon Hyakumeizan, “the full bulk of Hiuchi confronts you across an uninterrupted expanse of ground and I thought there could be no finer sight in the world. This shows Hiuchi at perhaps its best angle. That ridgeline almost pierces one to the heart, the way it traces out its near-perfect pyramid. And, with that langorous base, it is an exceedingly elegant pyramid." 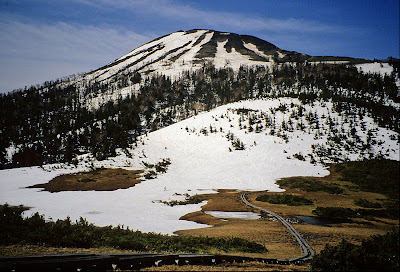 We gain the col and an open view over Oze’s lake and marsh. Now it’s clear how Hiuchi created them, by damming two rivers with debris flows. Opposite looms Shibutsu, the mountain that marks Oze’s western boundary. Further away, the snow-streaked gullies of the Nikko-Shirane peaks shimmer in the hazy spring air.

Above the col we navigate a thicket of creeping pine. This characteristic plant of Japan’s alpine zone hints that Hiuchi is a mountain that is high as well as deep. If a bush warbler flew northwards from here, it would reach sub-arctic Kamchatka before meeting with any higher ground. We scramble up to the summit and throw our packs down on tumbled boulders. It’s time for lunch.

Twenty years passed before Takeda could again attempt Hiuchi. In the meanwhile, he’d sailed to England, studied in London and Birmingham, returned to Japan and then embarked on an academic career that would take him to professorships in three imperial universities. His second journey to Oze, in 1924, was easier: roads and paths were vastly improved. This was just as well, as the party now had - in addition to the plant collection apparatus and camping gear - two cameras (a Goerz Roll-Tenax and Takeda’s favourite Piccolette), three lenses and twenty-odd films and photographic plates. 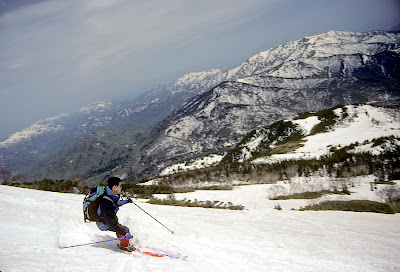 The weather was unsettled: on the fourth day, a storm forced them to take shelter under tree – it was a tall Aomori fir – while they watched the hail shred the foliage and lash the nearby lake into foam. Next morning, they started up Hiuchi. They found scattered white sankayo flowers; the scent reminded him of a former girlfriend, one of the party said. Takeda noted how birch trees predominated in the gullies, with the evergreens preferring the open slopes. 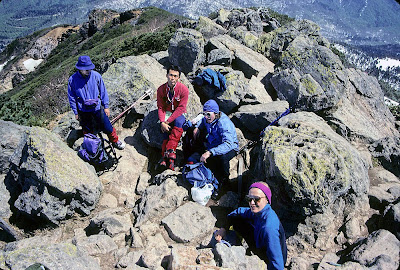 They scrambled through the creeping pine and onto the tumbled boulders of the summit. Unlike ourselves, they could not tarry: a thunderstorm “like a volcanic eruption” was raking the Nikko mountaintops with its lightning and threatened to drift their way. The botanists made a hasty escape into a gully.

Then the rain eased. They paused to admire the white billows of a mountain cherry tree in full bloom and, at that moment, they heard the uguisu. A nightingale was singing.
Posted by Project Hyakumeizan at 9:36 PM

I totally loved how a nightingale began and ended your story. It made me feel as if I had truly been on a journey. The photo of Hiuchi and the lower marshes is magnificent and, I thought, could be symbolic of much in life, from bring-your-own coffin to that lovely violet (a stretch but, hey, it's symbolism). And happy to see you back, cked your blog several times, kinda worried you'd had a fall.

wonderful account of a spectacular mountain. The pictures and description have me wondering if this was a Golden Week excursion? The snow cover suggests either a late April or early to mid May climb.

Hub and I leave for Europe this coming Tuesday, returning Aug. 4th. Stops in Germany going and coming, but mostly we're in Italy and Greece, the latter a quasi backpack. Hope to blog along the way. Enjoy your summer!

Kittie: thanks for the comments - and I trust you will have a great vacation in Greece. Look forward to the postings in real time.

Wes: no, not Golden Week. We went to Tsurugi in Golden Week (end-April), then, the following weekend, to Shibutsu (the other famous mountain of Oze) and finally to Hiuchi from the northern side. So, as you see, a "high mountain" followed by two "deep mountains" ....

I didn't know you had climbed Tsurugi in winter. That's highly impressive!

Do those bare legs belong to BJ?

Hanameizan: your BJ identification may or may not be correct. There was also a guest from California in the party. He attempted to telemark off the very summit of Hiuchi and was received by the patch of creeping pine. As for Tsurugi, we went there twice in Golden Week, ski/climbing, but that doesn't count as a true winter ascent....