Guides of the golden age 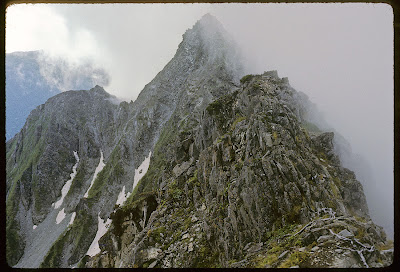 The idea of a golden age was borrowed from the pioneers of the European Alps by the Meiji-era banker, alpinist and writer, Kojima Usui (1873–1948). By his account, the final decade of the Honshū version started at the inauguration of the Japan Alpine Club in 1905 and lasted into the century’s teens. That was when the Army surveyors started bringing out the first modern maps of Japan’s mountainous regions.

In his essay “Yama mata yama”, Kojima explains that, by tacit agreement, the Meiji alpinists rarely named natural features after themselves. Guides, though, deserved and got such recognition: in the absence of proper maps, gentlemen amateurs and professional surveyors alike depended on the local knowledge of their hired men. 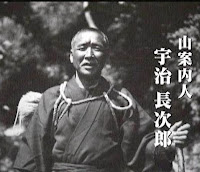 There was even a golden year within the golden age. According to Usui, this was the exceptionally productive season of 1909, in which guides figured prominently. That summer, Uji Chōjirō (right) took four alpinists to the top of Tsurugi, the first time that amateurs had climbed it. It was Chōjirō, of course, who had found the way for the Army surveyors who made the mountain’s first modern ascent two years previously. “Ah me,” sighed Chōjirō, “and I swore that I’d never again set foot on this fearsome mountain.” But he did, and his name is immortalised in the snow gully that he pioneered.

The same season, Saeki Heizō guided Tsujimoto Mitsumaru to Yakushi-dake. Dr Tsujimoto had just won scientific fame by isolating (from sharks) the lipoprotein squalene; now, thanks to Heizō, he was able to make the first detailed inspection of Yakushi’s glacial cirque.

Saeki Heizō started out as a “chūgo”, a guide for the white-robed pilgrims to Tateyama. Thus he summed up in his own career the transition from religious to secular mountain climbing. Appropriately, he lent his name to a snow gully and a col on Tsurugi-dake, Tateyama’s rugged neighbour.

Meanwhile, the veteran hunter Kamijō Kamonji (left) was edging across the Dai-Kiretto (colour picture above) in the company of Udono Masao (1877-1945). Kamijō had guided Walter Weston up Yari in 1895, but the Kiretto, a narrow ridge between Kita-Hodaka and Minami-dake in the Northern Alps, represented a greater challenge to Meiji-era mountaineers. Unlike Weston, they had no experience of alpine climbing.

Udono (right) was another of the pioneers who made a passage from religious to secular mountain-climbing. His father was a farmer who also served as a village “sendatsu”, the leader of a troop of pilgrims in the Fuji-kō sect. Thus it was that Udono first climbed Japan’s highest mountain at the age of 12. Making a career as an agriculturist, he sent his application to the newly formed Japan Alpine Club from Korea, where he was working for the colonial forestry agency.

The “epoch-making” Dai-Kiretto traverse – the epithet is Kojima’s – was no mere sporting feat: Udono carried in his knapsack a barometer, a thermometer and a pedometer with a view to making a detailed survey. His report appeared in Sangaku, the Japan Alpine Club’s journal, complete with a sketch-map that assigned names to all the intermediate peaks. Alas, none were called after Kamonji, but you can still visit the “Kamonji hut” in Kami-kōchi. 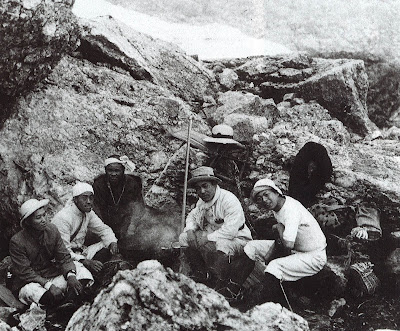 A fourth expedition of 1909 was Kojima’s own, to Warusawa-dake in Southern Alps. The mountain had acquired that name just a few years before, when one of Kojima’s fellow alpinists, Ogino Otomatsu, had spotted it from a nearby valley. As recorded in the first volume of Sangaku (and later quoted in Nihon Hyakumeizan), the incident captures the very essence of this exploratory era:-

"From time to time, we could see through the trees, on the other side of the valley, a mighty peak, bare-topped and reddish, in the midst of the Akaishi range. When I asked Kōhei, our hunter-guide, what it was, he called it Warusawa on account of the extremely dangerous gully that drains the waters of this mountain into the Nishimata. This sounded much as if he had just said the first thing that came into his head. As there are neither books nor people to tell you the names of the mountains, rivers, and places hereabouts, I am recording everything just as I hear it from Ōmura Kōhei."

A century later, Kōhei’s name for the mountain has stuck, despite misguided attempts to rebrand the peak as Higashi-dake. In such ways, the guides helped to shape the golden age – by finding the routes, porting the loads, making paths, building huts, and naming or bequeathing their own names to mountain features. As long as there are maps and mountaineers to read them, their achievements will live for ever.

Udono Masao's account of his Dai-Kiretto traverse can be found here
Posted by Project Hyakumeizan at 8:43 PM

What a lovely article. Thanks for sharing all this stuff. You wouldn't by any chance be putting together this forthcoming translation of the hyaku meizan, would you? If so, best of luck with it. I'll certainly purchase a copy.
Tony

Many thanks for reading, Tony. As for the Hyakumeizan translation, this is now complete - and Project Hyakumeizan is now "in discussions" with a publisher. Alas, the discussions seem to be taking a while, but we live in hope. Will keep you posted on this blog. Meanwhile, I congratulate you on raising international awareness of Japan's classic alpine routes on your own blog. Will add your url to the blog-roll before this computer is switched off for the night....

Hi Project Hyakumeizan.
Thanks for adding the url to your blog. There's already been some traffic through from your website, so it seems like it's a nice way to show people some of these alpine climbs. I had enormous difficulties finding information in English about routes and mountains when I arrived in Japan, so I guess I'm just trying to facilitate things a little for other people in return for all the fantastic experiences the Japanese mountains have given me.
Out of interest, where are you based permanently now? You seem to have done a lot of the benchmark alpine classics over here in Japan... when were you climbing? Were you a member of a Japanese mountaineering club, or operating in smaller groups? It would be nice to get together for a climb some time if you're ever back in Japan. There seem to be a few self-promotionists around in the English-language blogosphere, but not so many people just quietly getting it done out here in Japan, although that sentence probably contains its own explanation :-)
Thanks again for all the historical articles... it really adds to the experience of climbing in Japan to know the local history.

Hallo Tony: it's good to hear that your estimable site is getting a bit of traffic from One Hundred Mountains - as the only site providing actual practical climbing information on Japan in English, it's quite a unique service that you are providing.

As for Project Hyakumeizan, I'm now based in Zurich, Switzerland (though with occasional forays to Japan). I was living in Japan in the first half of the 1990s, so many of the postings relate to that period. As for how our group of Workmen Alpinists came together, you can find most of the details on the Kita-dake posting:-

And, yes, you are right - our focus was on those classic alpine routes, varied with ski-mountaineering, sawa-nobori, and the occasional volcano inspection, each in its due season. Will try to keep writing these trips up.

The "history" part of the blog is prompted mainly by the translation of Nihon Hyakumeizan, which Project Hyakumeizan undertook in a fit of insouciance a few years ago. The book is a gold-mine of references and introductions - a kind of vade mecum to Japan's mountain history, literature and landscape. A lot of the "history" postings are, in effect, footnotes to the translation, trying to explain who is who, and who did what, and why they're in the book etc. So, there you have it - Project Hyakumeizan.

But the main thing is to go out and climb those mountains, and you seem to be doing very well there. Look forward to more route descriptions and up-to-date photos on your site!