Mt Fuji is a true "yokozuna" among island-arc volcanoes

But how high is Mt Fuji really? Not in the arbitrary coinage of feet or metres or shaku, but compared to its peers. Can it be considered a true yokozuna among volcanoes when set beside such hulks as Chimborazo (6,268 metres), whose summit is further from the centre of the Earth than Everest's? Or Ojos del Salado (6,893 metres) on the Chilean-Argentina border, which may be – nobody is quite certain – the world’s tallest volcano? 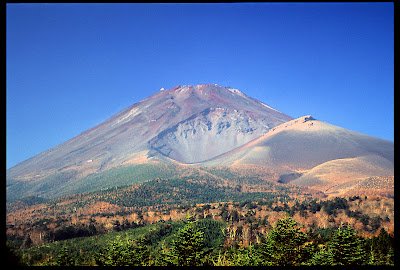 The comparison might be unfair. While the volcanic giants of the Americas stand on the solid footing of a continental craton, Fuji has to make do with the thin crust of an island arc - where it sustains itself by little more than "hinkaku", the ‘gracefulness’ that Fukada Kyuya attributes to famous mountains.

In fact, it’s hard to find island arc volcanoes that rise much higher than Fuji. Tambora, an Indonesian heavyweight, once soared above 4,000 metres, it is alleged. Alas, it met its Waterloo in 1815, when it blew apart in a massive eruption. The stump is now a thousand metres shorter than Japan’s top mountain. 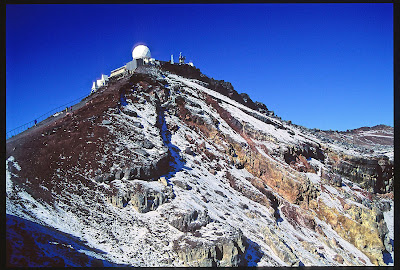 Then there’s Klyuchevskaya Sopka (4,750 metres), the tallest mountain on Kamchatka and the largest active volcano in the Northern Hemisphere. But – hold it – Kamchatka is not quite pukka as an island arc, being a peninsula joined to the Siberian mainland. Like a sekiwake implicated in a sumo match-fixing scandal, Klyuchevskaya must be disbarred on suspicion of soliciting illicit help from the Russian continental Underworld.

When it comes to its peers on true island arcs, Mt Fuji more than holds its own. It overtops the highest volcanoes in New Zealand and the Philippines by more than a thousand metres. And it stands almost crater-to-crater with Indonesia's tallest volcano, Sumatra's Mt Kerinci (3,800 metres). That close coincidence of heights set Project Hyakumeizan wondering. Is it just chance that the greatest volcanoes of Indonesia and Japan top out at roughly the same altitude? And how high can a volcano grow anyway? 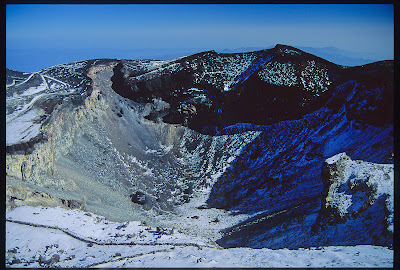 It turns out that few savants have considered this question. One who did was Peter Vogt of the US Naval Oceanographic Office in Washington. Looking at oceanic island volcanoes, such as Hawaii’s, he concluded that their heights were related to the thickness of the crustal plate on which they stood. The thicker the plate, the higher the volcano. Beyond a certain limiting height, the lava no longer has enough pressure to keep erupting from the volcano's summit.

Vogt ended his his 1974 paper with an intriguing speculation about the huge volcanoes discovered on Mars – Olympus Mons (火星富士: the Mt Fuji of Mars), the tallest, is almost three times as high as Everest, even though Mars is a much smaller planet. Such huge mountains, Vogt suggested, would need to be supported by a crust that is two or three times thicker than the Earth's. 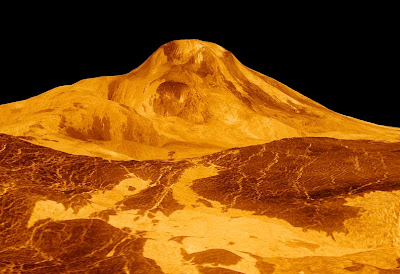 If Vogt's hypothesis holds for island-arc volcanoes, it may be that Mt Fuji has already grown as tall as it ever will. After all, it is already more than 700 metres higher than Ontake, the next-loftiest Japanese volcano. Fuji’s most recent activity, from a side-vent in 1707, added nothing to its stature. We’ll have to wait for the next eruption to see if Japan’s top mountain intends to make another bid for that coveted 4,000-metre brevet.

Image of Kasei-Fuji (火星富士) by courtesy of Jet Propulsion Laboratory
Posted by Project Hyakumeizan at 6:48 PM

Very, very interesting! I'm curious as to whether Loihi, the developing island at 3000' below sea level near Hawaii's Big Island , is a contributing factor in the New Zealand earthquakes. When we lived on Oahu, news reports often said there were small but measurable quakes, up to around 20,000 now, I've read.

"Time" magazine once did a cover story on earthquakes and named the Seattle area as the most dangerous in the U.S., all related to the Siberian peninsual about which you wrote.

Wow, Kittie - you have been quick to comment. As for the question whether the new volcano off Hawaii had anything to do with the Christchurch earthquake, I leave the question to the savants. However, a big local earthquake did precede the first-ever historic eruption of Ontake in Japan - see this blog:

On the other hand, when Tokyo was hit by frequent small earthquakes while the nearby island volcano of Oshima was erupting in 1987, the savants said that this was pure coincidence - the quakes had nothing to do with the eruption.

Mt. Fuji ... volcanos ... some of those you've mentioned i know, only some and not as much details about, any way, i appreciate the chance to learn in such a cosy way, interesting the Vogt theory about the lava preasure too

Yokozuna or juryo, plodding up the last few hundred metres to the top, Fuji is definitely high enough from my experiences. Another interesting post brightening up a foul Feb saturday. Height aside, it really is an interesting mountain from so many view points, climbing history, the beauty, the climbers, the weather, the geology and what will the consequences of the next eruption be for Japan.
I look forward to any future Fuji posts

Iain - mmm, more Fuji posts are definitely thinkable. But a mountain of this "yokozuna" stature really deserves its own blog....

I never heard about Vogt's theory of crust thickness... Thanks a lot for introducing it :-)

Wouldn't it be fantastic, though, if Fuji one day broke the 4000m mark? Of course, it would probably change the whole nature of the experience, the infrastructure etc... The requirement for acclimatisation would completely change the format of a climb of Mt Fuji, and with nothing else in Japan high enough to provide that acclimatisation (Kitadake is only 3192m after all), it would probably have to mean an overnight stay on the mountain, therefore far more huts required for the hundreds who go every day throughout the summer, much more complicated logistics for water (no natural water source at all on the mountain itself!) and food etc...

At the moment Fuji is just hovering around the upper limit for most people to do in a day without a guaranteed headache and a potential for worse.

Yeah, it would certainly be interesting if a couple of hundred metres were added to the top of Fuji :-)

Thanks Projecthyakumeizan, as always, for the wonderful posts and the food for thought.

Tony: thanks for reading. Mmm, I wonder if Fuji really could make it to 4,000 metres. (It would probably make a Godzilla-like mess of Tokyo if it tried.) One problem is that its considerable bulk (2.9 trillion tons) is not, as the savants say, "isostatically compensated" - ie it doesn't float on a big compensating keel of rock below it, as (eg) the Alps and the Himalaya do. So, if it added more weight, it might just sink through the floor. I hear the economists are saying much the same thing about Japan's government debt, incidentally.

This is something that has had my mind working, too. Japanese are so proud of their highest mountain and any reference to mountains abroad immediately meet with, "It's not as high as Fujisan," or "It's higher than Fujisan." Fuji is certainly an anomaly among Japanese mountains and volcanoes. As you pointed out, Ontake is considerably lower. And among Japan's top ten, the height difference between two and ten is only 192 metres, while Fuji is 583 metres higher than second place Kitadake. Remove Fuji from Japan and... well, Japanese culture and heart would be altered profoundly.

Mars has a much thicker crust because it is a smaller planet whose liquid mantle and core volume is much closer in ratio to its surface area, meaning it radiates its inner heat more rapidly than Earth with a much larger mantle/core volume to surface area ratio. (Like a pot of boiled water will cool more slowly than a cup of boiled water.) Thus Mars has cooled more, producing a thicker crust with far less frequent seismic and volcanic activity than Earth.

Fuji's recent quietude has had me pondering as well. Prior to its last eruption, Fuji erupted at least once per century, and given that it is said to have been lower during the last glacial period than Ainodake, it can be presumed that Fuji grew very rapidly over the last 80,000 years. So, why the (geologically) sudden cease fire? Has Fuji reached its upper limit right in our time? Or will it just be a matter of time before subsequent eruptions raise it to loftier heights? This question should have us consider that there are several cones and fissures in a roughly NW/SE line bisecting the mountain. Were pressure sufficient to cause an eruption to build under the mountain, there is no reason to believe that release would not come from these alternative outlets and as opposed to the summit crater.

In the long scale, we might look to other volcanoes that could someday potentially match or exceed the height of Fuji if they don't destroy themselves in the process. Asosan is said to have been much higher than Fuji at one point but collapsed on itself, and Asamayama keeps collapsing as well, only to rapidly build up an even higher crater.

But look, I am writing a blog post here myself.

Peter: thanks for explaining why a smaller planet (Mars) can sustain a much larger volcano (Kasei Fuji aka Mons Olympus) than Earth.

As for the height of Nihon-Fuji, I have a gut feeling, unsupported by much in the way of research, that the magic height of 3,776m is somewhat significant, geophysically speaking.

I wonder if the mountain will add to that height in future, given that (according to the savants) the last eruption from the summit crater was 2,200 years ago. All subsequent eruptions - and there have been many - have been from side vents, mainly on the north side but also (in 1707) on the south side.

As for future eruptions, the one before the most recent (1707) took place in the Heian period. When Nun Abutsu passed by in 1277, Fuji was no longer even smoking. "When did the smoke of Mt Fuji, which was so clearly seen in the past, cease?" she writes in Izayoi Nikki. So many centuries seem to elapse between eruptions of Mt Fuji, especially big ones.

Alas, the main threat now seems to be from the effusions of TEPCO. Like all friends of Japan, I earnestly hope and pray that those brave operators of the Fukushima Daiichi plant can get the situation under control....

Here's a site with a nice little video about Fuji's history, which you know already but is fun to watch. There's also a list of eruption activity. It certainly seems that any future eruptions of Fuji will likely be from side vents and not from the main crater.

Peter: many thanks for this reference - the geological history of Mt Fuji: now there's an idea for a future post, especially in the light of the new thinking about the Japanese archipelago's origins ....

You know, Hawaii's Big island volcanoes: Mauna Loa and Kea, both are more than 4,000m mark.