As every Japanese schoolchild knows, Fuji is 3,776 metres high. More or less, anyway…

For one glorious hour, Mt Fuji was promoted into the ranks of the world’s 4,000-metre peaks. That was on September 11th, 1860 when the first ascent by a foreigner was made by Sir Rutherford Alcock, Queen Victoria’s envoy and minister plenipotentiary to the court of the “Tycoon”. In his retinue was a Lieutenant Robinson who, a few days previously at Hakone, had “set to work, to the infinite astonishment of some native attendants, to boil his thermometer – in other words to ascertain the height of the lake.” 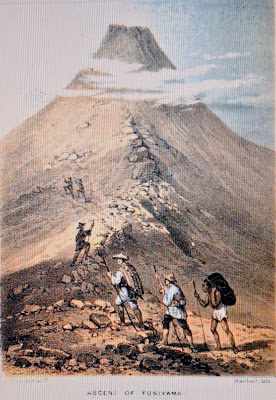 Repeating the trick at the top of Mt Fuji, Lieutenant Robinson came up with a height of 14, 177 feet – some 4,321 metres. He might have saved himself the trouble. As early as 1727 (or the 12th year of Kyoho), a savant by the name of Fukuda had triangulated Fuji’s altitude at 3,895.1 metres.

In 1828, Ninomiya Keisaku – physician, Dutch scholar, medical botanist and student of the German doctor, Philipp Franz von Siebold, – climbed the mountain and, for the first time, estimated its height by measuring the air pressure - whether directly with a barometer or by boiling his thermometer is unknown to this blogger. That gave an altitude of 3,794.5 metres. After Siebold's expulsion from Japan, Ninomiya also brought up Siebold’s daughter, Ine, setting her on course to become Japan’s first woman doctor. But that is another story… 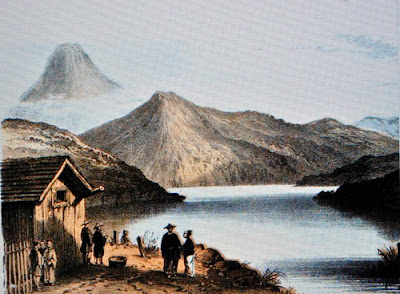 For the method and date, Ninomiya’s estimate was astonishingly close to the mark. Less than 20 metres off, in fact. Almost sixty years later, in the mid-Meiji era, the Japanese army surveyors came up with a figure of 3,778 metres, using modern trigonometric techniques and equipment imported from Europe.

Later, the Army's figure was refined to today’s generally accepted height of 3,776 metres – which, conveniently for historians, came into use in the first year of Showa (1926). This – or, more precisely, 3,775.6 metres – is the height of the triangulation point. A nearby rock makes the actual height of the mountain a shade higher. 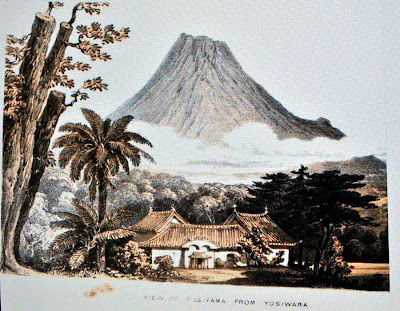 Not everybody got swiftly behind the new official altitude. As late as 1943, Dazai Osamu, a literary type, was still referring, in his novel One Hundred Views of Fuji, to "the three-thousand, seven hundred and seventy-eight-metre mountain…”. Or perhaps the writer was ahead of the curve. In 2002, Fuji was re-surveyed using the latest technology. This time, the altitude came out at 3,777.5 metres…

Next: Is Mt Fuji as high as it should be?

Sir Rutherford Alcock, The Capital of the Tycoon: A Narrative of a Three Years Residence in Japan (1863)

Prints: by courtesy of Sir Rutherford Alcock and Google Books
Posted by Project Hyakumeizan at 4:29 PM

This is a very interesting post and reminds me of "Glory is fleeting, but obscurity is forever.”

I love to read books about the diaries and letters of the diplomats who came to Japan during the Bakumatsu era and Meiji period. Ernest Satow's books are very good too. "The Capital of the Tycoon~" is fabulous! Have you read Izabella Bird's "Unbeaten Tracks in Japan"? She was not a diplomat, though. With many lovely illustrations, her book is really nice! The books written by French and Italian diplomats are nice as well. And thank you so much for your detailed explanation about the sun protection. I enjoyed it very much. I'm afraid Nitta Jiro was not at all interested in women's sunblock(grin).

Sapphire: thanks for reading - actually, I've only seen "The Capital of the Tycoon" in Google books - I have ordered a print copy to read in full soon. As for Isabella Bird, yes, I've read her. But Satow and Alcock were more in the thick of things.

Sun protection: yes, more work needs to be done on this subject. I seem to remember that, while in Japan, we relied on high-altitude lip protection from a shadowy organisation called the "Omi Brotherhood". That's probably a blog posting all to itself....

Measuring mountains is indeed not an easy task. many mountains have changed elevations over the last hundred years, Tsurugidake being one of them, oscillating between 3,003 metres and 2,998 metres. I have been looking up the elevations of Canadian mountains and generally find that the only constant is discrepancy. One has to conclude that Canadian mountains are either very difficult to measure (some elevations in the Saint Elias Range still not resolved) or it is just not that important to record the precise elevation. In truth, many attempts to measure those lofty peaks are aborted because of the weather.

As for Fujisan, it has been growing most of its geologically short life. Taking a 300-year plus sabbatical from erupting, I expect that the mountain will on its own terms reach over 4,000 metres in due course.

I really enjoyed your post. Fuji-san's slight growth surprised. I'd forgotten she'd last thrown a fit in the early 1700's...hmm, interesting. With all the glory and beauty that is Fuji-san, I've always found it paradoxical the Aokigahara lies at the base...beauty and the beast.