Journey to the centre of Mt Fuji

The Warthogs came skimming up the slope, chasing their shadows over the snow. We leaned on our ice-axes, glad of an excuse to pause, and watched as the jets half-rolled into a ballistic arc over the mountaintop. 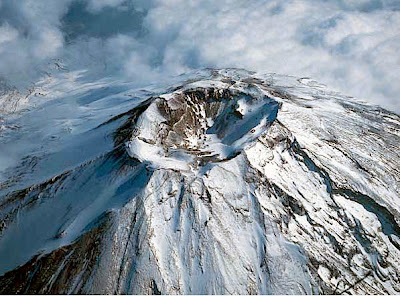 Craning upwards, the pilots must have seen Mt Fuji float, upside down, over their heads. It was clearly a good day for inspecting the crater. When we reached the summit shrine, all frosted up with rime-ice, I let slip my plan to Yamada-san. “Make it quick, then” he said. Our leader didn’t like solo excursions and November days are short. 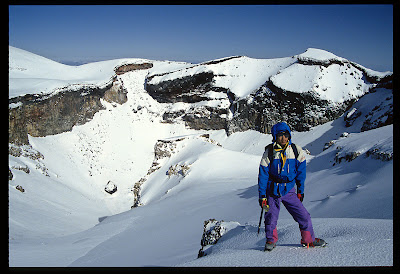 A short distance under the radar station, I found what I was looking for – a ramp of snow that led smoothly down into the crater. No sign of ice or treacherous windslab. Cautiously at first, then with growing confidence in the Styrofoam snow that squeaked under my crampons, I made my descent.

The crater first floated into human ken during the ninth century. The earliest mention is in a Record of Mt Fuji (富士山記) by Miyako no Yoshika (834-879), an official at the Heian court and a scholar of classical literature. This is what he says:-

Mt Fuji takes its name from that of the district. Its deity is the Great God Asama. As for its height, it rises so far above the clouds that nobody knows how high it is.

The summit is flat and about a league across. It is sunken in the middle, in shape like a rice-steaming pot (koshiki). At the bottom of this pot, there is a mysterious lake and in the middle of the lake, a large rock. The rock is strangely shaped, just like a crouching tiger. Vapour rises incessantly from the crater. The lake’s colour is a pure and deep blue.

If one looks into the crater, it’s as if the water is seething. Looking at the mountain from afar, one often sees smoke and flames too. The summit pond is ringed with bamboo, which is a lush green and pliable. The snow never melts in spring or summer. 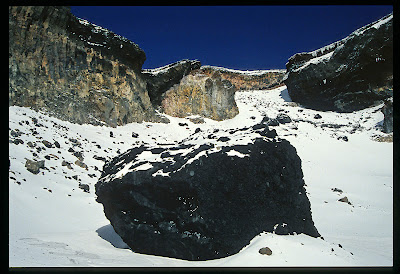 At the bottom of the ramp, I took stock. It was calm down here, sheltered from the gusts of snow blowing around the crater rim. There was no sign of a bamboo grove; just a sheet of rippled snow sloping down to a large black rock sitting at the crater’s lowest point.

If there was once a lake here, who came up to see it? According to Miyako no Yoshika, the mountain had only been climbed once, by En-no-gyōja. But this semi-legendary mystic and mage lived more than two centuries before Yoshika. In his own day, the chronicler says, “People can climb the mountain to its middle level, but it’s impossible to go further because of the ash which is always slipping downwards.” 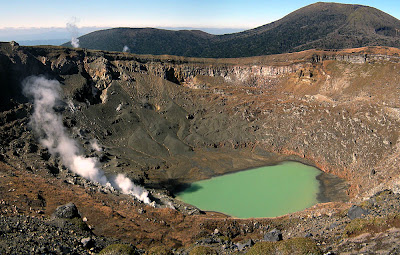 Yet the Record of Mt Fuji has the ring of an eyewitness account. Crater lakes are found in many of Japan's volcanoes, though they tend to be short-lived. If anybody did go up Mt Fuji in Yoshika’s lifetime, he first had to brave the bear-haunted and trackless forests. Above the trees, tumbling rocks and slip-sliding ash would await him, the unsteady ground steaming with fumaroles and racked by earth-tremors.

The attempt would have been hazardous. Around the turn of the ninth century, something prodded the Great God Asama into a renewed frenzy. Bursting from the summit region in 800-802, the ash clouds of the Enryaku eruption turned day into night. Debris raked the seaward slopes, cutting the main highway to the eastern provinces.

A smaller eruption in 826 was merely a prelude to the great Jōgan event. In 864-865, red-hot lava flows torched the forests on Fuji’s northern flanks before rolling down into Se-no-umi, broiling its fish and cutting the lake in two.

Faced with this onslaught, the authorities offered the Great God Asama a more commodious shrine (in what is now Fujinomiya). This may have been early in the ninth century. Then, in 859, they promoted him to the senior grade of the third court rank. And when that didn’t placate him, they censured the governor of Kai for neglecting the proper rituals and demanded an apology on the god’s behalf. 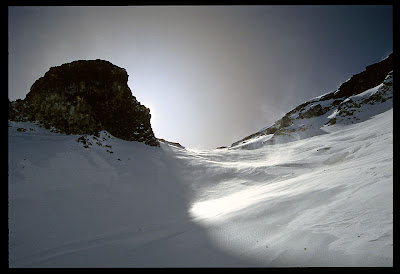 In hindsight, the officials might have claimed a partial success. Although Mt Fuji rumbled on for another two hundred years, it never again erupted on the same scale. And, soon after the Jōgan eruption, it showed quite another side to its personality, as Miyako no Yoshika records:-

On November 5th, in the 17th year of Jōgan (876), the officials and people were celebrating a festival in accordance with an ancient rite when, as the day wore on towards noon, the sky cleared wonderfully. Looking up towards the mountain, they saw how two beautiful maidens robed in white danced above the summit, seemingly a span or more above it. Several local people witnessed this; a very old man passed on the tale. 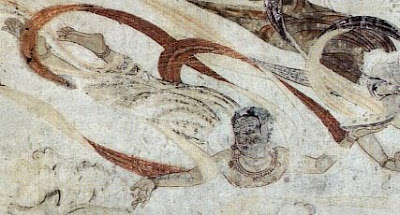 Today, it was snow-devils that the wind was chasing around the crater rim. The winter sunlight set the ochres and terracotta of the rock walls aglow, as if freshly scorched by the volcano’s fires. It was hard to believe, as the savants insist, that Fuji’s central crater fell silent more than two thousand years ago. All the recent outbursts have issued from vents on the sides of the mountain, including those big eruptions in Yoshika’s day. Indeed, a flank eruption is chronicled in his Record of Mt Fuji:

At the eastern foot of Mt Fuji is a small mountain, which the local people call the new mountain. Originally this was flat ground, but in March of the 21st year of Enryaku (803) black smoke and steam came churning up and, after ten days, the new mountain was formed. Probably a god created it.

Up on the crater rim, Yamada-san would now be examining his altimeter watch. Feeling like an Apollo astronaut on the last moon mission – too much to see in too little time – I moved over to the black rock. Its anthracite facets were so dark, amid the snow-glare, that they seemed to suck the noonday light into themselves. What was this stuff…? 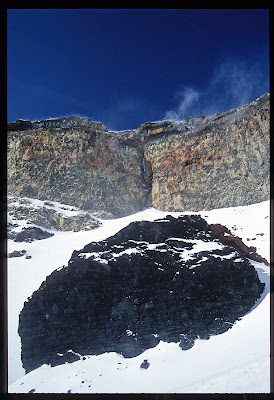 Pottering about in this crater a century ago, the mountaineering missionary Walter Weston had to ask himself a similar question:-

On the flat bottom we found great masses of newly fallen rock, and in a crevice of one of these a curious white substance embedded. Our friend described this as a great marvel – nothing less, indeed, than “petrified snow!” Possibly it was really some sort of gypsum, or even chloride of ammonia, which is sometimes found in the cooler part of volcanic fissures and fumaroles.
Perhaps Fuji does from time to time put out a crystal or two, together with its effusions of ash and lava. That would make sense of another enigmatic passage in Miyako no Yoshika’s account:

This must be a place where hermits and wizards disport themselves. As I’ve heard, during the Shōwa era (834-848), pearls and jewels rolled down from the mountain, each jewel with a little hole through it. These were probably beautiful gems that once adorned the reed screen of a hermit’s cell.

On the crater floor, I looked round for a souvenir – a beautiful gem would do nicely – but the ground was metres deep in snow. No matter, now it really was time to go.

A tentative translation from modern Japanese of the full text of Fujisan-ki. The chronicle was originally written in kanbun. It first appears in the Honchō-monzui, an anthology compiled in the mid-11th century.

Mt. Fuji: The Wellspring of Our Faith and Arts, Shogakukan, 2009.

Playground of the Far East, by Walter Weston (1918)

Aerial picture of summit by courtesy of JTB; Miyako no Yoshika and Warthog from Wikipedia; detail of flying apsara courtesy of 日本の美をめぐる, No. 11.
Posted by Project Hyakumeizan at 6:55 PM

All of your posts are fantastic, but I think this is my favorite. What a great combination of then and now. I was disappointed when you couldn't reach through the snow for a rock!! (But I don't want global warming to melt the snow...either in spring or summer...a circle.) "Crouching lion" - such an apt phrase...still have the music from that movie. Anyway, Great Post!

Thank you so much for this fantastic post. I really enjoyed it.

According to the official explanation of Sengen Taisha, the Great God Asama and Konohna-sakuya are the same diety, however, I think this is a little strange. As you say, "Asama" must have been the original god of Fuji though nowadays, Konohana-sakuya is better known to people as the guardian god of the mountain.

I've been long wondering why konohana-sakuya who belongs to 記紀
has been considered to be identical with "Asama". I suppose there are several possible reasons for it..

Kittie and Sapphire: thanks for reading - the question of the goddess of Mt Fuji is an interesting one. An essay by Miyazaki Fumiko in a book called Fuji-san to Nihonjin (Seikyusha) offers an explanation. Back in the eighth century, when Fuji started erupting again, shrine were built to placate the god Asama - definitely a male god in those days. Then (late Heian?), Monk Matsudai climbed Fuji and gave its worship a distinctly Buddhist cast - Asama was then "merged" with Dainichi Nyorai. Still later, Asama was identified with Kaguyahime (at this stage, he changed from god to goddess). Then, finally, in early Edo period, Asama/Sengen became identified with Konohana-sakuya. I'm reading this on page 124 of the book and I hope I've understood it correctly. Perhaps you can ride to the rescue with a well-researched blog posting, Sapphire. But don't annoy the Sengen shrine. They own all of Mt Fuji above the eighth station, you know, and one day I'd like to climb the mountain again ....

Many thanks for your detailed explanation. I really appreciate it. I felt that behind those complicated changes some esoteric traditions might have had something to do with them so it would be better for us not to discuss the issue further. "Sawaranu kami(deity) ni tatari nashi"!