The kompa broke out at midnight. We'd driven up through Karafuru, a hot spring town where the last yukata-clad revellers were staggering back to their ryokan, weaving between plumes of steam that vented up from gratings in the street. Our friends had arrived before us, their tents already pitched beside the river. When we showed up, Kirins were cracked open; a kompa was customary whenever Workman Alpinists from Tokyo met up with the Gunma crowd. 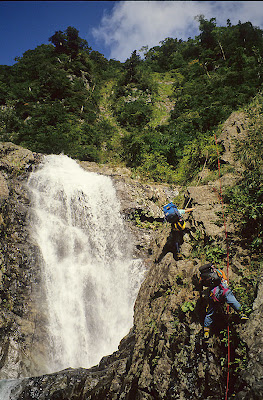 Lack of sleep notwithstanding, we struggled out of our sleeping bags before 5am; timekeeping was good when our patron from Gunma, a Himalayan veteran, was around. An hour’s walk along a woodland track took us further up the river valley. The sawa-climbing started gently; after a hot summer, there wasn't much water and we made our way easily over beds of dry pebbles. 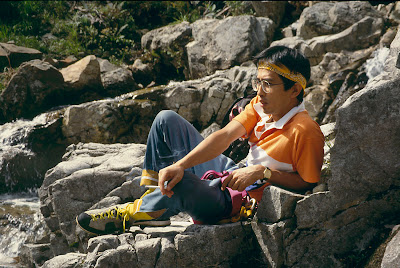 When the valley narrowed down into a gorge, hiking boots were changed for wading shoes. That is, six of us pulled on modern nylon wading boots with brillo-pad soles, while Kuriffu-san, our guest, tied traditional straw sandals onto the kind of toed ankle-boot favoured by old-style Japanese builders. 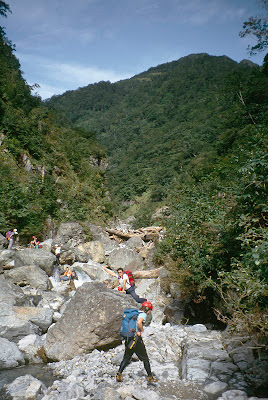 Straw sandals, known as waraji, were the staple footwear of mountaineers during Japan’s Golden Age of alpine exploration. Even Walter Weston tried them out. But that was a century ago. By 1964, the Hyakumeizan author Fukada Kyūya was referring to "mountaineers of the old school like myself, who go climbing in straw sandals and leggings". Even then, straw sandals smacked of the past. 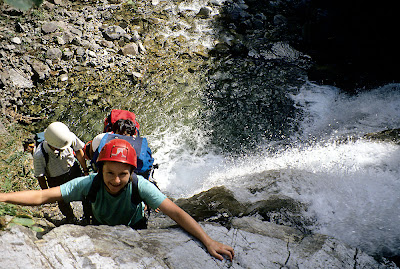 Still, somebody has to uphold tradition, and who better than Kuriffu-san, a Bristol-nadeshiko from the West of England and an expert on traditional Japanese dress. I did wonder, though, how the straw soles would cope when we got to steeper ground. At 8.30am, underneath a white rock like a castle, we roped up for our first waterfall. At first sight, the straw sandals seemed to be coping well. Maybe there was something to these old-fangled ways. 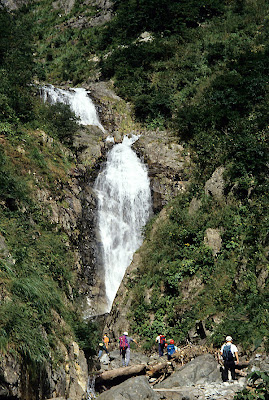 As it happened, I never saw how Kuriffu-san dealt with the second waterfall. That's because, just then, I was clinging desperately to some weeds on the gorge's sidewall. Everyone else was making their way up the rope, which the leader had fixed, securing themselves by a sliding prusik knot. This is a suspect technique – the knot can slide down just when it needs to arrest a fall, or jam up just when you need to move higher. Indeed, prusik knots had been behind a couple of recent sawa accidents. Prusiks gave me the creeps. 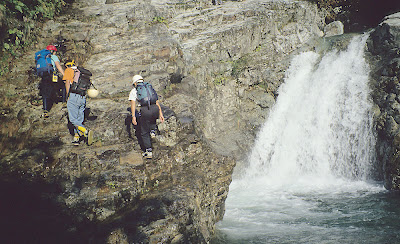 But soloing on steep, wet grass is even worse. Getting breathlessly to safety, I reminded myself that 'takamaki' – attempts to climb around waterfalls rather than tackle them directly – cause many more accidents than prusik knots. Fortunately, nobody seemed to have seen my weed-pulling foray and we moved on. 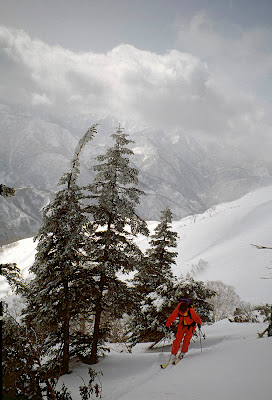 Ahead, the flat top of Tairappyō beckoned us on. Strange to say, this was the first time we’d laid eyes on this summit, although we’d ski-climbed it at least once. In winter, the mountain keeps himself shrouded under a cloud-cap woven from the moist winds blowing in from the Japan Sea; even on a fine day, spicules of snow keep drifting down, like diamond dust, from those woolly clouds. In this summer heat, it was hard to believe we were on the same mountain. 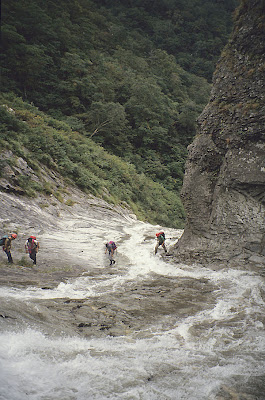 The centrepiece of Sasa-ana-zawa is a fifty-metre stretch of waterworn slabs that lead, like a royal road, directly up Tairappyō's eastern slopes. These we climbed on pure friction, splashing in and out of thin sheets of fast-flowing water. Straw sandals seemed to perform just as well as modern brillo-pad soles. 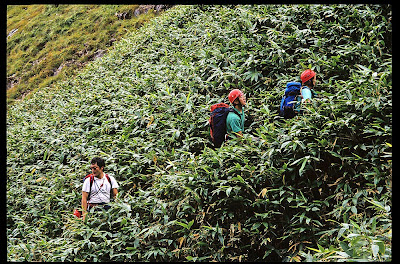 After the slabs came the bamboo grass from which the sawa takes its name. For an hour or so, we "rowed the sasa", pushing our way through its thickets of dust-laden and razor-edged leaves. Filthier than before, we emerged gratefully onto the ridge. When sawa shoes were changed for hiking boots, Kuriffu-san hurled her worn-out straw sandals back into the sasa. Several more pairs of waraji could be seen rotting in the grass around us: Sasa-ana-zawa, it seems, is popular among sawa-climbing traditionalists. 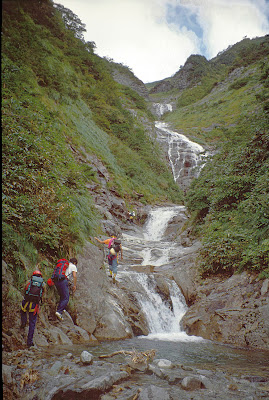 Setting off homewards along the ridge, we wound our way between rhododendron bushes. The flowers were long gone at this season. Instead, the pampas grass waved tall beside the path. There was more than a breath of autumn in the air.
Posted by Project Hyakumeizan at 9:06 PM

Today I've met a person who reminded me very strongly to Fukada Kyuya. One more time I've remembered One Hundred Mountains. Observing a gently colored pink sky of this evening I've thought about magic Alpine light & rock's structure...
In a few weeks I will start to learn Japanese. Where and if this is going to lead me, I do not even think about, just once know: life is like a billiard table and we some kind of balls: once we were hit by another (good) person, we will change direction, neither for better nor for worse ...
Thanks for good blog sir, I really do enjoy.

The thrill of the climb bubbles gently throughout this post, pulling the reader ever upward. Your photos are fabulous, especially the one at the top - breathtaking!

I enjoyed how the straw sandals worked out. I had a pair when I lived on Okinawa - several when I lived in Hawaii. They're a lot more durable than they look, but I hadn't thought they'd be mountain climbing sturdy. Am delighted with this little gem!

Sounds like you had a wonderful time! I enjoyed this post a lot which vividly depicts a fun-filled atmosphire of the kompa and the thrill and pleasure of the climb.
I was impressed with your English expression, "we rowed the sasa". We say in Japanse "sasa wo kakiwake" but I think "rowed the sasa" sounds more poetic. Your description of the sasa reminds me of Narihira(在原業平）who once returned home pushing his way through the thickets of dew-laden(not dust)and razor-edged sasa leaves from his sweetheart's house very early in the morning.
秋の野に笹わけし朝の袖よりも......

PS
I read your another sasa post about Hitomaro. It was really great! Thanks so much.

Tree formerly known: I wish you all success with your Japanese studies. Such are always rewarding...

Kittie: good to learn that you too are a straw sandal fan and look forward to the next instalment of Okinawa!

Sapphire: many thanks for this additional literary sasa reference - curiously, Tales of Ise (Ise monogatari) was my breakfast book today, but I haven't yet found the episode about sasa. Perhaps it's time for a post about the Seven Flowers of Autumn. Or perhaps, as we now live in such an urban setting, one about the Seven Industrial Plants of Autumn ...?

I've just read your comment. This Narihira's waka is not in the Tale of Ise. It is in Kokin-shu(古今集).
No.622 is it.

Narihira was one of the most celebrated waka-poets and he wrote numerous waka-poems and he had numerous love affairs(笑). The poems you can see in the Ise are some of them. You must have read about "Akutagawa", chapter 6, in which he took Takaiko(藤原高子）to the river. He carried her piggyback(おんぶして）to the river. The dewy field in the 6th chapter is my favorite scene.