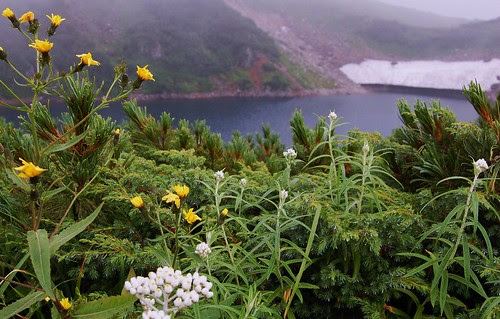 Text: On Mikurigaike, from Nihon Hyakumeizan (One Hundred Mountains of Japan) by Fukada Kyūya (1964):

Above Jigoku-dani is Mikuri-ga-ike, a lake with waters of an exquisitely deep blue. Naturally, we cannot pass by without sampling its legends. There was once a monk who took a swim here, unheeding of the people who tried to stop him. On the first attempt, he bathed with a dagger clenched between his teeth and emerged unscathed. Then, letting down his guard, he went back into the water unarmed. He swam around the pool once, twice, and then on his third round he was dragged down into the depths never to reappear. This episode gives the lake its name, which means 'Thrice Round Pond'.

thanks for the info about this lake. I never knew the legend behind it. I've got some nice shots of this lake still half frozen in mid-July. I'll send you one if I can remember where I put it

Wes: well, if you had never heard the legend about the lake before now, that's all the more reason to publish the English version of Nihon Hyakumeizan soon. I'm hoping for some positive news in that direction in the next few months ....

Thanks for telling us this interesting legend. I didn't know about it at all. Sunnybeauty's photo is so lovely.

Love hearing legends like that. And that lake looks absolutely beautiful.