The Kitakama concluded: scaling the final chimney in the footsteps of alpine pioneers

We granted ourselves a ten-minute lunch break on the greenwood col. No more, because the afternoon clouds were already boiling up from nearby ridges. Scrambling to our feet, we addressed ourselves again to the Kitakama. No soft lead-in was offered or taken. Rising abruptly from the col, Pinnacle 8 was a fifty-degree slope of leafmould and stony tilth. Security, if any, was found by gripping the whitened roots of the creeping pine, some of which broke off in our hands. 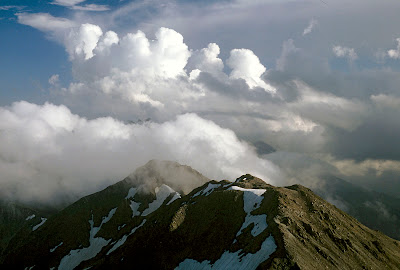 If we’d hoped to see Yari after topping this rise, we were disappointed. Instead, the view was filled by the triangular bulk of the Doppyō, a peak in its own right. Evading its in-your-face challenge, we took to aery traverses on the west side, some on sound rock and some on rubble-strewn ledges that tilted downwards over impressive spaces. In one place, huge blocks were poised over the path like some Temple of Doom device in an Indiana Jones film. 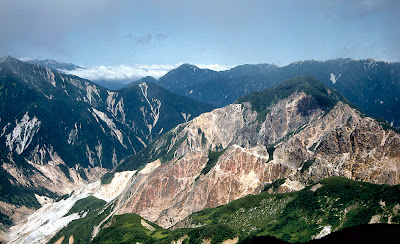 Yet the rock looked almost sound when compared with the horror show of Sulphur Ridge, which reared its spiny length along the other side of the Senjo valley. In the heyday of post-war alpinism, people used to traverse those serrated towers of Digestive Biscuit, but we felt no desire to emulate them. That would certainly be a ridge too far. 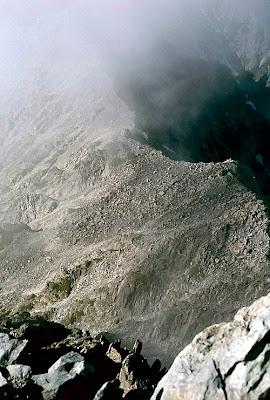 Donald had just disappeared round the side of a small peaklet when I felt the rock tremble; a muffled thud sounded from somewhere far beneath. Before I could panic, Donald's head reappeared over the ridge. Not to worry, he’d just trundled a large boulder into the snow gully below. 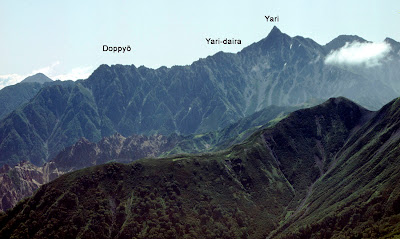 This incident reminded us to keep our heads switched on. Like any great alpine climb, the Kitakama demands ceaseless vigilance; the exposure is continuous and the route's remoteness gives it a special atmosphere of isolation and menace. Rescue, if any, will be a long time coming. In those days, there was said to be only one civilian helicopter pilot in Japan who was qualified for alpine rescues. 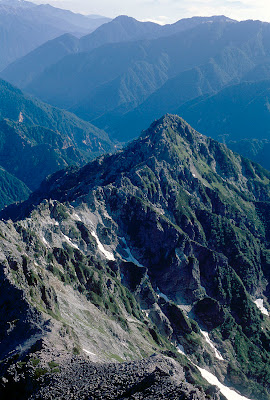 Right now, though, it was thirst rather than the scenery that was getting to us. Somehow, in the excitement of our river-crossing a few hours before, we’d omitted to refill our water bottles. This was a mistake; the ridge proved to be as dry as Prohibition. Meanwhile, the sun, the heat, and the cracking pace set by Donald had the sweat rolling down our foreheads. 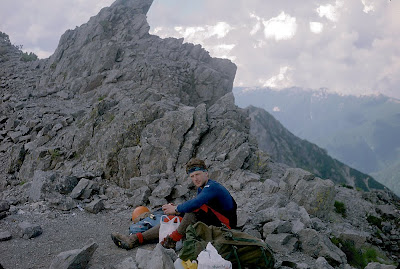 By Peak 15, we were assailed by the Foaming Tankard Syndrome, a syndrome that prevents its victims thinking of anything else. Finding an unexpected patch of flat ground – this must have been Yari-daira, a favoured bivvy site for winter and spring ascensionists – we took a break. My water bottle was long since empty, but Donald shared the last drops of water from his own. Such gestures live for ever in a mountaineer’s memory. 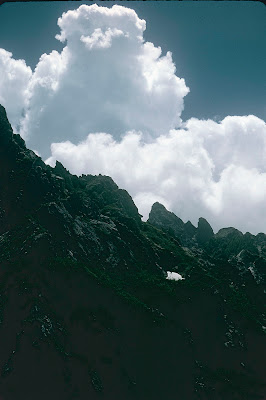 At 3.45, Yari's shadowy north face loomed above us. Fortunately, the climbing proved less formidable than it looked. We scrambled up the left arête until it steepened, then side-stepped rightwards into a commodious chimney that wafted us to the summit.

Maybe I don’t remember that right, because the mountaineering missionary Walter Weston, who pioneered this route in 1912, was of a different opinion. He called it the hardest and most interesting climbing he’d ever done in Japan - excepting only his Ho'o-zan feat. (Weston's party too trundled a boulder that “splintered itself as it ricocheted from point to point and then fell into and down the couloir in a thousand fragments”.) Watch out for this stuff.

As Weston and Nemoto Seizo, his guide, traversed in from the south side of Yari to reach this climb, they didn’t make the first ascent of the Kitakama. That honour fell to rival teams from Waseda and Gakushūin universities who raced each other up the ridge on a July day in 1922. This was the year after Maki Yuko made his epoch-making first ascent of the Eiger’s Mittelegi ridge; suddenly, in Japan, long alpine ridges were all the rage. 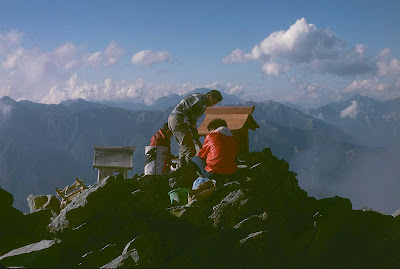 We finished our own ascent some time after 4pm, popping up on the summit beside two artisans who were busy bedding in a new shrine. After half an hour’s relaxation amid the drifting afternoon clouds, we made our way down the mountain’s south side to the hut where a be-dreadlocked student from Cambridge brought us foaming cans of Asahi. All we had to repay this kindness was a solitary packet of cashew nuts. Although, of course, it had come all the way up the Kitakama. 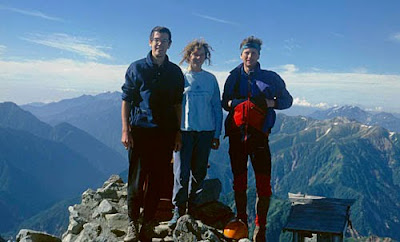 And, for the Kitakama ridge in a more modern idiom, see CJW's account of his recent solo ascent.
Posted by Project Hyakumeizan at 1:04 PM

From your account and CJW's it sounds like a couple of big water bottles are required, if you're not doing this ascent in winter.
Out of interest what did you do after you had taken the cure for foaming tankard syndrome? It would have been dark and it sounds like you had no money or food?

ain: yes, the ridge is dry, so you need to take along all the water you intend to drink. But we didn't plan to camp - and didn't - so our water needs were limited. We started in the morning at the Yumata onsen/hut and put up at Yari sanso that night. So no need to carry anything but the most basic survival gear. As for food, I guess we were carrying enough for two days - one day for the ridge and (don't forget) the 22km hike out the next day from Yari Sanso (hut) to the bus station at Kamikochi...