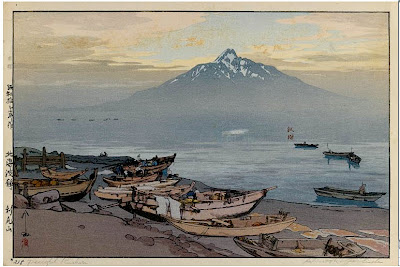 Text: On Rishiri, from Nihon Hyakumeizan (One Hundred Mountains of Japan) by Fukada Kyūya (1964):

I'll never forget the starkly beautiful form of Rishiri, silhouetted against the evening sky. Seen from the neighbouring island of Rebun, it rose up across the shimmering sea, not as a facsimile of Fuji, to which it is sometimes likened, but as a jagged rock, steeped in gold by the rays of the setting sun The whole island seems to surge upwards into its central peak of 1,700-odd metres. ... This ideal mountain floating on a shimmering sea can only be Rishiri.

Posted by Project Hyakumeizan at 8:51 PM

Gorgeous! Thank you! I copied to my desktop to open when the soul needs nourishment. Hope that's okay!

Kittie: you are very welcome - Project Hyakumeizan is also fond of this picture - and is actually lucky enough to own an original woodprint, not admittedly printed by the hand of the Master himself but by his heirs. The good news is that these second-generation prints ("atozukuri") are about one-tenth of the price of the ones printed by the artist himself - yet they are printed from the same block, of course, and are indistinguishable from the older versions. And I see from the internet that you can pick them up for as little as $200...