A Hyakumeizan encounter with the father of modern physics in Japan

eclipse in Fukui, Japan , a photo by sunnybeauty on Flickr.
Only one solar eclipse is mentioned in Nihon Hyakumeizan, Japan's most famous mountain book. This was one that tracked directly over Shari-dake, a famous peak in Hokkaidō:

The Japanese will never cease from putting shrines on their favourite mountains and Shari-dake was so honoured in 1935. Its summit sanctuary is sacred to Ōyamatsumi-ōkami and Ame-no-mikumari-ōkami. In 1936, Dr Nishina Yoshio, who had come to the mountain to take measurements of cosmic rays during the solar eclipse that year, dedicated a torii gate of silver birch wood… 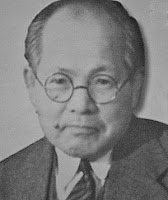 Cosmic rays were not Dr Nishina's principal line of business. The best part of a decade before the Shari-dake eclipse, he'd returned to Japan after several years in Copenhagen studying quantum physics under Niels Bohr. Back in Tokyo, he'd settled down to propagate that arcane new science within a small but enthusiastic community of researchers. It was this work that earned Nishina (left) his reputation as the "father of modern physics in Japan". 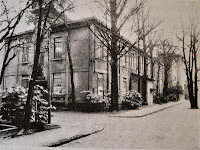 In 1931, he opened his own laboratory at Riken, Japan's national research centre for physics and chemistry (right). His leadership style was as novel as the scientific theories he propounded. This is how a young associate remembered it:

The word “organisation” gives an impression of formality, but the whole Laboratory was really a very easygoing, free and friendly group. We related to each other as equals, except in research, and the senior members were kind and solicitous towards newcomers like me. I felt then that this highly supportive atmosphere, exceptional especially in those days, was a naturally occurring phenomenon. However, in hindsight, I realise that it was probably a reflection of Dr. Nishina’s personal ambitions. I think he was eager to create the kind of atmosphere that he had experienced during his eight-year stay in Europe, in the circle of highly talented men who followed and revered Professor Niels Bohr…

By 1935, Nishina's main ambition was to build a cyclotron, along the lines of the pioneering particle accelerator that Ernest Lawrence had devised a few years earlier at Berkeley. With advice from Lawrence – who remained a life-long friend – construction of a small cyclotron started in 1936.

Meanwhile, Nishina had also started to take an interest in cosmic rays, as a source of sub-atomic particles with energies that no cyclotron could match. A cosmic ray research group was set up in 1931-32. This was a lively epoch in an emerging field of enquiry.

When a foreign group reported that some particles, perhaps neutrinos, were capable of penetrating deep underground, Nishina said “Interesting, let’s try it” – a characteristic phrase – and his group took their detectors to the innermost reaches of the Shimizu tunnel. Cosmic ray experiments were also installed on the roof of Riken, on an ocean liner, and atop Mt Fuji – transforming Japan’s most eminent Meizan, not for the first time, into a mountain of science.

But where did cosmic rays come from? If some came from the sun, then an eclipse should temporarily block them from reaching an earth-bound observer. The June 1936 eclipse in Hokkaidō provided Nishina's research group with the chance to re-test that hypothesis.

North wall, Mt. Shari, a photo by threepinner on Flickr.
Some 800 kilos of kit were freighted from Tokyo up to a remote corner of Japan's northern island and then ported two-thirds of the way up the 1,545-metre Shari-dake. On June 19th, the scientists were rewarded with a clear view of the sun's temporary disappearance.

Others who stayed at the mountain's foot, including a British delegation were not so lucky; low clouds obscured their view. In the event, the needles of Nishina's apparatus barely wavered during the eclipse, confirming that cosmic rays originate from far beyond the solar system.

Annular Eclipse, a photo by tsubame on Flickr.
Then came the war. In May 1943, Nishina was put in charge of Japan's efforts to develop an atomic bomb. Or rather the Army's efforts. For the Navy had its own nuclear project and the two research groups hardly spoke to each other, so intense was the inter-service rivalry.

By January 1944, the Army's "N-Project" (N stood for Nishina, not for nuclear) had produced a rice-sized crystal of uranium hexafluoride. The next step would be to run a larger-scale refinement process using a thermal separator. But in March 1945, most of the Riken buildings burned to the ground after a bombing raid, effectively ending the project.

The N-Project brought down on Nishina's head a petty yet savage act of reprisal. In November 1945, a low-loader drove unannounced into what was left of the Riken compound. Soldiers started to break up the laboratory’s large cyclotron as the scientist remonstrated and his wife and secretary stood by and wept. Then the wreckage was dumped in the sea (below). 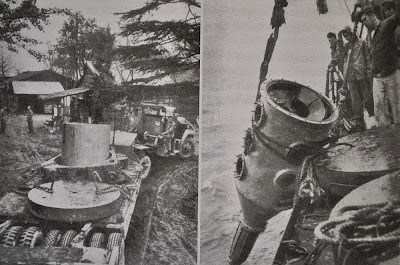 To this day, it is unclear who in the Occupation authorities gave the order to destroy the cyclotron – which had little or nothing to do with weapons research. No American scientists were consulted, for none would have approved the action.

Fortunately, Nishina was able to ally himself with American physicists such as Karl Compton, the president of MIT, to prevent Riken itself sharing the cyclotron’s fate. During the first desperate post-war years, he also oversaw a project to manufacture penicillin, as way of shoring up the institution’s finances.

Once Riken’s future was safe, Nishina prepared to return to physics research. But this was not to be. His colleagues were planning his 60th birthday party when he suddenly fell ill. The celebration had to be cancelled and he passed away on January 10, 1951.

Sixty years later, Riken continues to flourish as one of Japan’s leading centres of fundamental research. Cosmic rays are still a speciality. Recently, Riken scientists used them to illuminate the inner structure of Mt Asama, a volcano and yet another of the Hyakumeizan. One can almost hear Nishina-sensei murmuring his encouragement, “Mmm, interesting, let us try it …”

Thomas C. Reed, Danny B. Stillman: The Nuclear Express: A Political History of the Bomb and Its Proliferation

Many thanks to sunnybeauty, threepinner and tsubame for allowing me to link to their photos on flickr.
Posted by Project Hyakumeizan at 11:50 AM

Interesting posting. I never thought I'd ever read a post that links Hyakumeizan with Japan's A Bomb project.
Digging a bit deeper on the A Bomb project, wikipedia says that the Japanese Army and Navy back in the '40s searched for uranium ore in Fukushima ken. I wonder if they ever found any and if so where was the mine?

I had no idea Japan was in on an A bomb project. We always hear about how terrible it was that the U.S. dropped two bombs on Japan and there are a million discussions as to the why of the situation. But what if Japan had developed the bomb first? Would it have been dropped on the U.S.? China? What a different version of history that would have been. I want to bring this up with a student of mine who might know about this because he was a young lad when the War ended.

Peter: the 'what ifs' concern me a lot less than the 'what might be' scenarios these days. As for Fukushima, I think you'll find that angle covered in an NYT article. It's surprising how many places on the planet that uranium can be found. Too many, perhaps, on reflection ...