So who was the first to climb Mt Fuji? And could it have been a Heian-period scholar?

Once again, the most interesting questions on this blog come from the readers. “What do you think of Miyako no Yoshika (都良香)? He might have climbed Mt. Fuji in the 9th century…” writes fellow Japan blogger Sapphire, in a comment on a previous posting. 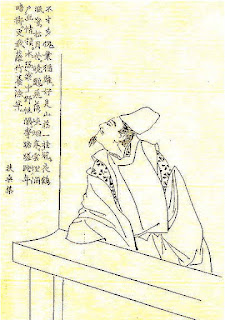 Miyako no Yoshika (834-879, picture right) was a scholar and statesman of the Heian court. Today, he is most famous for having written up the earliest convincing account of Mt Fuji’s crater. This appears in an essay entitled A Record of Mt Fuji. Unfortunately, history doesn’t relate whether he saw the crater for himself, or heard about it from somebody else.

According to Nihon Hyakumeizan, Japan’s most famous mountain book, Mt Fuji was ascended by the mountain mystic En no Ozunu, in the year 633. This made the mountain the first of its height in the world to be climbed. But En no Ozunu is a semi-legendary figure, and some accounts have him flying to the top.

And, if we allow flying – an ethically dubious ploy – then En no Ozunu might have been beaten to the post by Prince Shotoku (574–622). For quite a few paintings show the Asuka-period constitutionalist vaulting over Mt Fuji on a magical black steed (below). 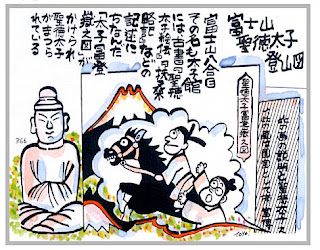 By 1149, in the late Heian period, people were climbing Mt Fuji for real. In that year, Monk Matsudai built a well-attested shrine on the summit. But he was probably not the first to find a way up there. So could it indeed have been Miyako no Yoshika who first climbed Mt Fuji, more than two centuries earlier?

On the face of it, the ninth century would have been a bad time to make the attempt. Three huge eruptions wracked Mt Fuji between 800 and 865, the last one so extravagantly effusive that it created a new lake at the mountain’s foot. Yoshika’s own account of the volcano describes how a new parasite cone suddenly appeared in March 803.

Even if he wasn’t put off by these fulminations, Yoshika had a lot of business to keep him in Kyoto. He was a lesser private secretary (shō-naiki) in the administration, and a professor of literature too. In 870, he set the civil service entrance examination for Sugawara no Michizane, who later became the greatest scholar-statesman of the age.

Intriguingly, the exam’s second question required Sugawara to “Analyse earthquakes” – elucidating why the normally still earth moved, how the Chinese explained the phenomenon, and how the Buddhists in India explained it. Michizane first presented the Confucian view – that the earth heaved when the emperor’s virtue was inadequate and the government was in disarray – and then added a Taoist interpretation of earthquakes for good measure.

Reading this story, I was momentarily enthused. Perhaps Miyako no Yoshika was a would-be geophysicist, born a thousand years before his time. If so, he would naturally have wanted to climb Mt Fuji, taking samples of the ash and meticulously recording the still-steaming lava streams as he went…

Alas, a re-reading of Yoshika’s Record of Mt Fuji disabused me. The essay doesn’t support the idea that Yoshika was a proto-scientist. Indeed, it’s clear that the author’s real concerns lay elsewhere than the crater; which is described more or less as an afterthought. What really fascinated Yoshika were the supernatural “Immortals” said to inhabit the upper slopes, or the angels who were seen dancing in the clouds over the summit.

For Yoshika, it seems, there was no dividing line between the “natural” and “supernatural”. In Heian times, nature and super-nature were larger and more mysterious than humans could possibly imagine. A quaintly outmoded way of thinking, one might have thought – at least, until last year, when those waves crashed ashore that were higher than anybody could possibly have imagined.

So perhaps Yoshika didn’t climb Mt Fuji after all. Yet there is still something appealing in the idea of him hanging up his court robes on the back of his office door – perhaps after a stressful day examining the impossibly precocious Sugawara – sneaking out of the Palace incognito, and then hopping aboard the evening Shinkansen to Shizuoka for a quick run up Mt Fuji...

As for Sugawara - I'd almost forgotten him - he got the equivalent of a “D”, the lowest passing mark. As you see, there was next to no grade inflation in Heian Japan. And rather little mountain-climbing too.

Robert Borgen, Sugawara No Michizane and the Early Heian Court

Miyako no Yoshika, A Record of Mt Fuji

Picture of Miyako no Yoshika from Wikipedia; cartoon of Shotoku Taishi from this blog.
Posted by Project Hyakumeizan at 8:11 PM

Thank you so much for posting this! I learn a lot from you. I found it funny that Michizane had almost failed the exam.
As you say, perhaps Yoshika didn't climb Fuji at all. He may have heard about the crater from someone. From who? I wonder. There might have been some obscure kamikaze monk(yamabushi) climbers in the 8th and 9th centuries. I suspect that they thought quite differently from the way we do about climbing the mountain(volcano) and about the danger caused by it....

Sapphire: thanks for stopping by. Yes, even in the ninth century, it would have been possible to climb Mt Fuji - after all, there were many years between those three big eruptions. And, yes, it must have been a yamabushi. Monks and mystics had been climbing high mountains such as Hakusan and Tateyama for two or three hundred years by then. Monk Matsudai apparently "trained" on Hakusan, so evidently they wandered from place to place too.... just like modern climbers, indeed.

Thank you so much for this fascinating write-up. I'm sorry in advance for rambling about something tangential, but I thought it might be interesting to know how information gets passed around.

I found this post while researching a character from a game series called Touhou Project. Essentially, the series takes place in a sealed-off fantasyland where mythological creatures and ideas live once they have been denounced by the common sense of the real world.

One character is a jiangshi (a reanimated corpse) who bears the name "Yoshika Miyako." On account of being long dead and only kept alive by artificial means, Yoshika typically acts like a brainless zombie -- yet sometimes is caught spacing out and reciting poetry, as if instinctively recalling memories of a human personality.

The parallels drawn between the character and the man are blatant yet vague, and I'm always really interested in studying how history and culture manifest in fiction. My hobby as a fan of the game is writing lyrics for the characters' theme songs, and of course a character based on a poet is especially inspiring.

This article helped me a lot with that: the context of his time period, the intent and focus of his writings, the metaphorical motif of reaching high places, and the mystery surrounding the truth of these records were all things that I was happy to learn about and use in paying respects to the person and the character.

Incidentally, another character in the same game is based on Prince Shotoku. So, the note here about how flying over Mt. Fuji was one of Shotoku's supposed accomplishments, likely one of the mystical deeds that caused his story to melt into fantasy, was very interesting to read.

You wrote: For Yoshika, it seems, there was no dividing line between the “natural” and “supernatural.” Because of how shockingly relevant it is to my own interests and context, this line honestly made me appreciate the character on a new level and will stick with me. So, once again, thanks very much for sharing your knowledge and thoughts.

Asa, thanks for dropping by and for the fascinating (to me) revelation that Miyako no Yoshika and other figures from early Japanese times have been reincarnated as game characters. Well, it does help to keep their memory alive, and I'm glad this post has been useful in elucidating their background, albeit from a narrowly focused mountain point of view. And you mention "a sealed-off fantasyland where mythological creatures and ideas live once they have been denounced by the common sense of the real world". Well, not too unlike the world which we mountaineers inhabit, once you come to think about it...