A crazy idea, thought Colonel D W Johnston. Nevertheless, he would have to choose his words carefully. After all, the proposal had come from his boss, General Twitty. With a sigh, he started dictating a memorandum: "26 March 1945: The proposed project of attempting to give Fujiyama some color other than that seasonably endowed by nature is not favorably considered for the following reasons."

Painting Mt Fuji would be both difficult and dangerous, Johnston objected. Even if the mountain's tint could be changed, people living at a distance might not notice. And if they did, then "Japanese propagandists would undoubtedly seize on this as another 'inhuman act of the beastly enemy' and would consider it in the same light as the desecration of a national shrine, which, in fact, it is."

And so the infamous plan to paint Mt Fuji was kicked into touch. As a psy-ops venture, it was a non-starter. Leaflets tossed out of aircraft would be far more cost-effective, as Johnston's memo pointed out. In another sense, though, both the colonel and the general had seized on something important. Mt Fuji is a symbol of immense significance. But what exactly does it signify? 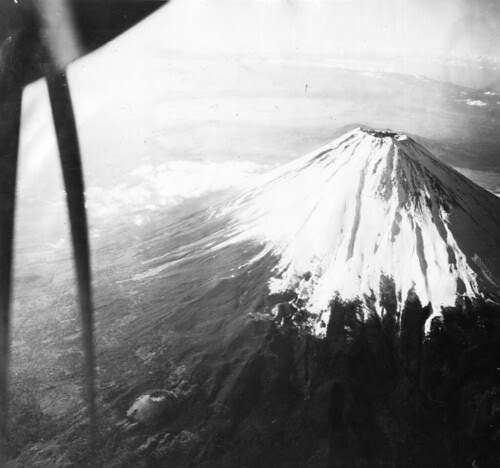 View of Mount Fujiyama taken from an 8th Photo Recon Squadron aircraft, 1945-46, a photo by San Diego Air & Space Museum Archives on Flickr.
For the first time in decades - perhaps for the first time ever - an English-speaking expert has attempted to answer that question in a full-length book. In Mt Fuji: Icon of Japan, Harry Byron Earhart has provided a rich overview of Mt Fuji's history as a symbol in Japanese religion, art, literature, and even in wartime propaganda - you can read the latter chapter, which sits rather oddly with the rest of the book, online here.

Earhart is the emeritus professor of comparative religion at Western Michigan University and has taught and published in the field of Japanese religion for four decades. Fittingly, the core of his latest book is the development of religious worship on and around Mt Fuji. This alone is an epic story, and one that is inextricably linked with the evolution of Japan's culture and polity.

Monk Matsudai was the first to establish a summit shrine on the mountain, probably in 1149. By the Muromachi period (1337-1573), pilgrims were making regular ascents, usually after visiting one of the shrines at the mountain's southern foot. A contemporary mandala painting shows a procession of monks or pilgrims winding their way up the endless slopes of the Maruyama trail.

Today, the Maruyama trail has more or less faded from the map. In fact, it had fallen into disuse long before the modern roads were built to the mountain's fifth stations. This was partly because the Maruyama yamabushi, the direct heirs to Matsudai, made the mistake of supporting the wrong side during the civil wars that wracked sixteenth century Japan.

By contrast, the Great Shrine of Ōmiya had a good warring countries period. Emerging from the conflict with the support of the warriors and the Tokugawa family, it formally wrested control of Mt Fuji's summit cone from the Murayama sect in 1679 - and it continues to enjoy legal title to the mountain above the eighth stations to this day.

But the Sengen Ōmiya shrine had little to do with the most significant Edo-period religious movement centred on Mt Fuji. This was founded by a wandering ascetic known as Kakugyō (1541-1646), whose successors encouraged the common people - farmers and townspeople - to found Fuji pilgrimage associations, the so-called Fuji-kō.

By the end of the eighteenth century, the Fuji-kō had so many followers that the movement was starting to worry the feudal authorities. (The parallels with today's Falun Gong sect in China are striking.) Inheriting these suspicions, the Meiji government coerced one of the leading Fuji-kō sects into becoming an approved branch of the newly established state-controlled Shintō.

Official approval seemed to mark the start of a slow decline for the Fuji-kō. Today, no more than a handful of congregations exist. Or it may be the case that some Fuji-kō groups morphed into new religions, such as Maruyamakyō. During the 1980s, Professor Earhart was able to make contact with three different Fuji-centred congregations and join them on their annual pilgrimages to the mountain.

Taking the chance to distribute a questionnaire to his fellow pilgrims, Earhart asked them why they were climbing Mt Fuji. These were some of the answers he received:

"A Japanese does not need a reason to climb Mt Fuji."

"From long ago, Fuji has been close to our existence, and by climbing Fuji we become physically and spiritually refreshed."

"I am allowed to climb Fuji together with all my ancestors who climbed Fuji, and those who wanted to but were not able to climb Fuji."

"To know myself, and to realise peace with myself within nature."

"I climb in order to renew myself."

"To purify my own heart."

I have a feeling that it will be a while before any researcher gets closer to the meaning of Mt Fuji than that.

Thanks to Dave Fedman of Stanford University for the anecdote about painting Fujiyama. The source is a declassified US Army memorandum.
Posted by Project Hyakumeizan at 7:43 PM

Oh This is a very interesitng post! "A lunatic idea"?! I don't think so, though. I'd love to read
"Mt Fuji: Icon of Japan" by H Byron Earhart. Thank you so much for sharing!!
By the way, what do you think of Miyako no Yoshika(都良香)? He might have climbed Mt. Fuji in the 9th century.

In May I went to Kiyoshi-Kojin(in Takarazuka-city) and visited Tessai(Tomioka Tessai 富岡鉄斎) Museum there. I saw many Fuji paintings by him and one of them was a huge Byoubu painting on which Fuji was featured. You may've seen it. This Fuji was really majestic and interesting. He in fact climbed Fuji with Ike no Taiga(池大雅）and some other friends.
http://with-takarazuka.com/tetu/2009/10/tokubetsuten.html

Sapphire: many thanks for the hints about Kiyoshi-Kojin and Tomioka Tessai: I'd like to follow them up one day, especially if the artist(s) went so far as actually to climb Mt Fuji.

As for Miyako no Yoshika, I wonder if he actually climbed the mountain. He certainly knew about the crater. But he also had a lot of business to keep him in Kyoto, including testing Sugawara Michizane in his doctoral examination in classical literature. Sugawara apparently got a "D": there was no grade inflation in Heian Japan ....