With bated breath, I’ve been reading Br’er Wes’s gripping account of an unstructured situation on a winter mountain in Japan. In four instalments so far, he's told how he and his hiking partner lost the path, started to descend a gully and then found themselves struggling down ever-steeper, rougher terrain as night came on…. 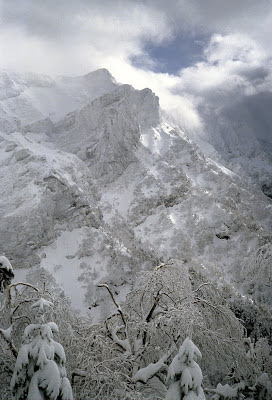 Not a few mountain days have ended like this. All it takes is a chance alignment of events, compounded by a trivial error or two. Sometimes the outcome is harmless – we are glad to have Wes back, safe and sound - sometimes less so. As when Fukada Kyūya, in his first year at Tokyo University, received a message from two of his juniors.

In April 1926, life was good for Fukada – of course, we can’t call him the Hyakumeizan author yet, as that book lay almost forty years in the future. A few weeks before, he’d entered the literature department of Japan’s most prestigious university, and now he’d just been invited on an interesting trip to the spring mountains.

Yamasaki and Yoshimura, two students at his former high school, wanted to visit Yatsu-ga-take. They’d borrowed ice-axes, snowshoes and crampons from the school’s Travel Club, but didn’t feel up to tackling the mountain on their own. Would Fukada like to come too and guide them?

Late on April 14, the three students boarded a Chuo line train at Iidamachi. In the early hours of the next morning, they alighted at Chino and spent most of the rest of the day slogging through deep snow up to the Akadake-Kōsen hut.

On April 16, they headed for Io-dake, one of the crumbling volcano’s eight peaks, topping out at about 2pm – somewhat late in the day for such a short climb. But the snow was soft and dragged at their boots every step of the way. When they reached the flat-topped summit, the clouds blew away to reveal the long ridge of the Southern Alps. And, to the east, the students could now look down on the roofs of their intended destination, the Motozawa hot springs.

They’d planned to take the normal route down to the hot springs, from a low point on the ridge known as the Natsuzawa Pass. But, as they got up from their summit pause, they noticed a wooden signboard that promised a short-cut: “Motozawa – 18 cho”. The path wasn’t marked on their map – yet those roofs looked so temptingly close. Without much debate, Fukada and his companions voted for the short cut. The path led out across the top of a cliff band, but so far nothing they couldn’t handle. Then it ran under a snowbank and vanished. To turn back now, though, would be tedious – the hot springs were just below them.

Fukada led the way down the steepening slope, at every step driving his ice-axe handle into the slushy afternoon snow. Then he heard a shout: Yamasaki had slipped but managed to stop himself with his axe. This is getting dangerous, Fukada thought – and, in that instant, Yoshimura lost his footing and began to slide.

“Jam your axe in!” yelled Yamasaki, as Yoshimura tumbled past them. Then he was gone. As fast as he dared, Fukada edged to the brink of the cliff. Then he scrambled down the steep ground, in the corner of the cliff, clinging desperately to bushes. Before he reached the foot, he found Yoshimura’s body, hanging over the branch of a low tree, face downwards, lifeless.

Later, Fukada recalled that evening in an essay entitled “A friend who laid down his life in the mountains” (山に逝ける友人):

The feeling in that moment when I scrambled down the cliff, dragged Yoshimura from the branch of the tree where he was hanging and howled; the feeling as I ran, half-stumbling, down the snow to the hot spring to get help, the feeling, in that evening wind slashing down from the mountains, of having left somebody irrevocably behind, the feeling of hurrying frenziedly across those three miles of meadow, coming up against fences in the dark, losing the way; then, the next evening, while helping to bring the body down a country track, seeing Yoshimura’s father coming up to meet us, stepping forward to say my apologies, and then I could no longer stop the tears I’d been holding back.

The accident didn’t stop Fukada going to the mountains, even temporarily, it seems. Over the next decades, he amassed a great amount of winter and ski-mountaineering experience, and even led one of Japan’s first expeditions to the Himalaya after the second world war.

Naturally, there were close calls. Nineteen thirty-five was particularly eventful: in March, an avalanche almost took out his ski-touring group near Norikura; in June, he lost the way on Aizu-Koma-ga-take and scrambled down a rugged gully, at the cost of ripped trousers and a cut face; and then in August an epic river crossing ensued after heavy rain forced the party to abandon a traverse along the main ridgeline of the Southern Alps.

But none of these incidents seared itself into Fukada’s memory like the Yatsu-ga-take tragedy. When he came to write up the One Hundred Mountains of Japan, Yatsu could hardly be excluded – it is still one of the most popular high mountain destinations for today’s Tokyo-based mountaineers, just as it was in Fukada’s youth. Yet his praise for the mountain is curiously muted. And the chapter ends on a desolate note:

Forty years ago, when I first climbed Yatsu-ga-dake, it was still a quiet place … We stayed at Akadake-Kōsen hut, just two or three years after it had been built, and next day, climbed to the summit. Then we picked our way along the rocky ridge over Yoko-dake to the broad, grassy top of Iō-dake. The difficulties were now over, I thought, and gave a sigh of relief. But I was much mistaken. A moment later, my companion fell to his death. Even now, when I see the steep wall on the north side of Iō-dake, hard by Umi-no-kuchi, where he met his end, the pity of it strikes me anew.

Great to see you are posting again. An interesting read and looking fwd to the next one.

I'll second that; a good read.

I guess there's a lesson to be learned from Fukada. He got back up on that saddle after the tragedy at Yatsu. I know in time I will once again venture into snow country, though with a renewed sense of safety and perhaps a tinge of fear.

Fukada didn't let life's misfortunes overtake his life and got back up.

It's snowing here. When I look out the window, I have a keener appreciation for how climbers cope with all.