Alpines from the abyss

How Kita-dake got its flowers: an essay in geo-poetry

You’ve taken the hard way up Japan’s second-highest mountain – twelve pitches on the Buttress – and this is your reward. Hauling yourself onto the exit ledge, you peel off the sweat-soaked climbing slippers and admire that distant cone floating over the nearby ridges. Then you pull on hiking boots and start up towards Kita-dake’s summit, on a path that leads through the secret flower meadow. 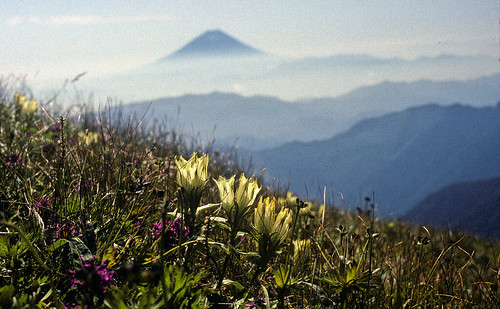 Gentians, a photo by Alpine Light & Structure on Flickr.
Unseen by hikers on the normal route, those bellflowers and gentians might start you thinking. How is that alpine plants so favour Kita-dake? And why are the Northern Alps so lacking in them?


If the savants are to be believed, the difference has less to do with the climate than the terroir. For, geologically speaking, the two mountain ranges have completely different backstories. To simplify a bit, the Northern Japan Alps sit in the ruins of a giant volcano, leaving them with the slaggy ground of an industrial wasteland. By contrast, Kita-dake and the rest of the Southern Alps emerged from the ocean deeps, endowed with a rich and varied burden of minerals.

One hundred and thirty million years ago, the future Kita-dake was a volcano somewhere in the southern ocean. Coral reefs fringed its upperworks, growing up towards the light. Slowly, the volcano rode the sliding Pacific plate northwards, creeping centimetre by centimetre towards an oceanic trench.

On Kita-dake Buttress, a photo by Alpine Light & Structure on Flickr.
As the volcano slid further into the depths, the reef died off, its coral lithifying into a crumbly white limestone – you pulled onto a ledge of that when you finished your climb. Meanwhile, a constant drizzle of dead plankton filtered down from the sunlit regions above, covering the volcano’s slopes in siliceous ooze. After millions of years cooking in the pressure-cooker depths, this sea-floor slime hardened into overlapping rafts of purple chert – these are now the very slabs that you climbed over on your way up Kita-dake’s eastern face.

Seventy million years ago, and the wreckage of the volcano had sunk to the bottom of the Japan Trench – although, strictly speaking, there was still no Japan. Submarine avalanches of mud and clay unfurled silently from the continental slopes above, laying down layer on layer of marl and sandstone. Arriving at the bottom of the trench, the volcano jammed in the maw of the subduction zone. Eventually, the mountain’s upper works, former reef and all, tore away from the volcanic base and welded themselves to the understorey of the future island nation.

Japan itself came into being a mere thirty million years ago, when a plume of molten rock, rising from deep within the earth’s interior, rifted a long strip of territory away from the continent. As for what induced the plume to rise just then and there, even the savants cannot say. One speculation is that it formed from the rock that melted when a downgoing slab of the Indian plate broke away, like the Titanic’s bow section, after sinking beneath the nascent Himalaya.

But this might be altogether too much of a geo-poetical conceit. What’s certain, though, is that Kita-dake’s varied melange of rocks and soils will show you several different herbiaries, depending on the route you take down the mountain. If you head northwards, you’ll find gentians (トウヤクリンドウ, Gentiana algida) braving the summit ridge, and cinquefoil (ミヤマキンバイ, Potentilla matsumurae) too. 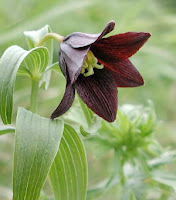 Then, sheltered from the wind on Kotaro Ridge, you’ll descend through a meadow spangled with buttercups (ミヤマキンポウゲ, Ranunculus acris var. nipponicus), anemones (ハクサンイチゲ, Anemone narcissiflora), and globeflowers (シナノキンバイ, Trollius japonicas). Don’t disturb the photographers, though, who are desperately trying to focus on those black lilies (クロユリ, Fritillaria camtschatcensis) nodding in the breeze.

Or you might decide that it’s too late to get back to Tokyo. Then you’ll set off southwards to Kita-Dake Lodge. Just above the tumbled limestone blocks of Hapomba Col – more remnants of that ancient reef – you turn right, towards the big hut. The plants change too hereabouts. Here you’ll find the saxifrage (シコタンソウ, Saxifraga bronchialis subsp. funstonii var), the mountain avens (チョウノスケソウ, Dryas octopetala), and the alpine forget-me-nots (ミヤマムラサキ, Eritrichium nipponicum). 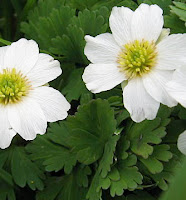 And, if your luck is really in, you might see a Kita-dake ranunculus (キタダケソウ, Callianthemum hondoense), named for this mountain. Elsewhere it’s found only on a single peak in Hokkaido, on Sakhalin, and on the ferociously cold Mt Pekto in North Korea. Round about you’ll see boulders of sandstone and serpentinite, a greenstone from deep beneath an ancient seabed. They seem to like here, these rare flowers, amid the scattered relics of a former ocean.

Flower photos: from Wikipedia.
Posted by Project Hyakumeizan at 8:35 PM

Quite likely the best piece I've seen on the origins of Kita-dake, coupled with the beauty of the wildflowers that grace its exposed slopes.

Some of those flower names are a bit of a mouthful to pronounce, and I have to admit that my knowledge in flora to be limited to nothing more than "look at that red flower, and these blue ones!". Though I can recognize the ニッコウキスゲ a mile away

Many thanks for reading this somewhat eccentric piece, Wes. Sorry now not to have transliterated all the Japanese flower names into romaji while I was about it - they are almost as euphonious as the flowers themselves are beautiful. Although the names in every language have their charm, as you can see from the gentians/Enzian/Toyakurindo...

I don't think I've ever read a more interesting piece about how an area originated. Kita-dake should be featured on a NatGeo segment as there's such a rich history covered with gorgeous flowers. The buttercup is a favorite.