The curious history of cats who climb mountains

What about cats then? The question came from a follower of this blog. I mean, she remonstrated, you’ve posted about the exploits of dogs such as the Hyakumeizan-bagging Hana, and Toby, the canine conqueror of Mt Fuji. But where are the mountaineering cats? There’s at least one feline stationmaster in Japan. So somewhere there should be a climbing cat…

Now, if velvet-pawed alpinists really existed, you’d expect to find them curled up by the stove in a mountain village. And, strange to say, that is exactly where we did find one – or rather his posthumous pawprints. Azumino is a rural community that lies at the foot of Japan’s Northern Alps. Appropriately, it is twinned with the Swiss village of Grindelwald and – no less fittingly – it was home to Japan’s most famous mountaineering cat.

Improbably, Mikè was a male tortoiseshell cat – we say ‘improbably’, because almost all cats with the characteristic brown, orange and white brindled coat are female. In fact, “Mikè” means tortoiseshell. But the chances against a tortoiseshell tomcat coming into the world are about 3,000 to one, according to Wikipedia. Having defied the odds in being born at all, it was thus inevitable that Mikè should develop a most un-catlike interest in hill-walking.

All in all, he climbed almost 60 local mountains with his owners, Mr and Mrs Okada, sometimes following them, sometimes pushing on ahead. If this stretches your credulity, then please watch the video. His summits were modest; it’s not recorded that he ever tackled one of Japan’s One Hundred Mountains. But the exercise seems to have done him good. He lived until he was at least 15, a ripe old age for a cat.

Or perhaps he was just lucky. It so happens that those famous beckoning cats that you see in every Japanese shop – the so-called manikineko – are tortoiseshells. Nobody knows why. But everyone believes that manikineko bring you good fortune. Maybe some of it rubbed off on Mikè. 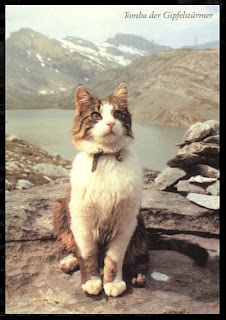 It does help to be lucky if you are an alpinist, whether feline or human. One who stretched his luck to the full was Tomba. We were reminded of his story – for Tomba’s fame is deathless – when we dropped in last weekend on the Schwarenbach Hotel. Ringed by peaks of more than 3,000 metres, this hostelry in Switzerland’s Bernese Oberland is a favoured base for ski-mountaineers. And, as it once happened, for a top-flight feline alpinist.

Tomba came into the world at the Schwarenbach in August 1988. And, as in Mikè’s case, the deck was heavily stacked against his long continuation there. Just after he was born, his mother abandoned her newborn kitten for five days, returning only just in time to save his life. Perhaps this kittenhood trauma accounts for Tomba’s independent and self-reliant nature.

Be that as it may, his first mountaineering exploit is recorded in May the following year, when the hotelkeeper Peter Stoller learned that the grey and white tomcat had followed three mountaineering guests up to the top of the Rinderhorn (3,454 metres). A few days later, Tomba escorted another party to the top of the Balmhorn (3,699 metres). Thus opened a distinguished climbing career that took the cat to the top of almost every high mountain within reach.

Like any alpinist who wants to stay around, Tomba was careful about the company he kept. The night before a climb, he would fastidiously sniff the backpacks set down by visiting mountaineers in the hotel’s entrance hall. Next morning, the favoured party would find the cat padding along behind them through the pre-dawn gloom. As Hedy Sigg and Max Pfiffner did on September 6, 1989, just after they left the Schwarenbach at 5am.

It was then that they recalled their conversation with Mrs Stoller the previous evening. Would anybody else be climbing the Rinderhorn that day, they’d asked. They’d thought their hostess was joking when she replied “In all likelihood, nobody except the cat.” 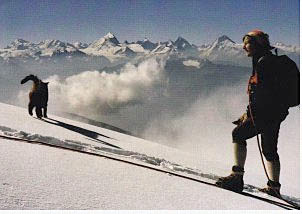 But now their amazement grew as they watched the cat trot after them in the strengthening light, wending his way through a boulder field, up a snowy gully, and finally over steep and icy slopes to the summit (see photo). Max thought he’d have to bring the cat down in his rucksack but, no, Tomba was having none of that. A good alpinist comes down on his own four feet, and so he did.

On another occasion, the cat chose to accompany a young couple. Halfway up the mountain, the climbers saw Tomba veer from the normal climbing route and vanish behind a large rock. The couple followed him, thinking that perhaps he’d found something interesting. At that moment, an avalanche thundered down the couloir, wiping out the tracks they’d just been following.

Thanks perhaps to some kind of feline sixth sense, neither Tomba nor any of his companions ever came to any kind of harm on a climb. Alas, all his alpine skills were not enough to save him from an early death: when Tomba and his mother contracted a fatal feline illness in January 1993, both had to be put to sleep.

Tomba was certainly Switzerland’s most prolific feline alpinist. Oddly, though, the country’s altitude record for climbing pets of any kind goes to a much less famous and, indeed, anonymous black and white cat – one that belonged to Josephine Aufdenblatten, the cook at the Hörnli hut at the foot of the Matterhorn’s eponymous ridge. 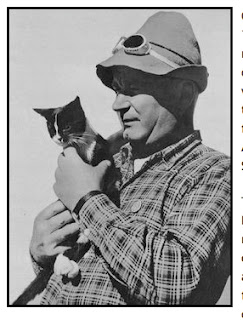 On August 10, 1950, the day after Aufdenblatten noticed her cat was missing, mountain guide August Julen met with the animal somewhere below the Solvay Hut on the Hörnli ridge. The cat avoided the Lower Mosley Slab, a tricky rock step, but rejoined Julen and another guided party at the Solvay Hut, a refuge shelter perched on a ledge at 4,000 metres. There the guides gave her – for she was, apparently, a lady feline alpinist – some food.

Immediately above the Solvay Hut is the Upper Mosley Slab, which human climbers scale with the help of a fixed rope. The guides expected that this obstacle would stop the cat and, indeed, she tried her claws on the rope without success. But somehow she found another way around the impasse and reached the mountain’s shoulder. Here she nearly met her end, after she slipped on the icy snow and arrested herself at the last moment by clawing onto a ledge. And so she found her own way to the summit of the Matterhorn, at 4,478 metres Switzerland’s tenth-highest mountain.

This story too ends sadly. Julen wanted to catch the cat and bring her down in his rucksack, but she ran away. Later, an Italian guide did take her down the mountain, to the village of Breuil on the south side. And there she stayed, despite Josephine Aufdenblatten's entreaties to have the cat returned. The following winter, another Swiss guide found the cat again. She had been stuffed and now adorned a restaurant in Breuil. Perhaps she adorns it still.

The History of the Matterhorn: First Ascents, Projects and Adventures, by Beat Truffer

Photo of Tomba on the Rinderhorn: courtesy of Hedy Sigg and Max Pfiffner 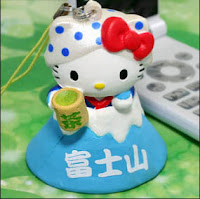 Posted by Project Hyakumeizan at 9:44 PM

It seems that Miike was well-known in the local Azumino area, and his book can sometimes be found in a local shop (or more easily, on Amazon).

I guess cats make much better rock-climbers than dogs.

Thank you so much for this very interesting post. I didn't know Tomba's story. Like the title of this post, Hello Kitty can climb mountains; lots of Hello Kitty netsuke (Fuji-san special version) are sold in many lodges on Mt. Fuji. One of my friends bought one last year on the mountain.