The origins of alpinism (3)

By early 1905, the banker and journalist Kojima Usui had gathered round him all six of the friends who would help him found Japan’s and, indeed, Asia’s first alpine club. Of the club itself, however, there was still no sign. On March 25, Kojima was gently reminded of this fact by none other than Walter Weston, the mountaineering missionary. 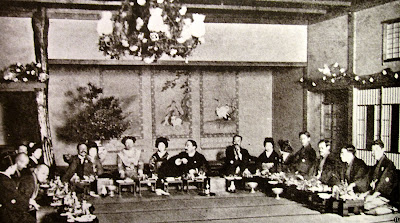 Four days before returning to England, at the end of his second stay in Japan, Weston invited his friends to a farewell party (above) at the Oriental Palace Hotel in Yokohama. Among the guests were Kojima himself, Okano Kinjirō, a Standard Oil man and Kojima’s companion on the ascent of Yari-ga-take in 1902, and the two young naturalists, Takeda Hisayoshi and Takano Takazō.

It was Weston who had introduced Kojima to the idea of an alpine club at their first meeting in Yokohama, back in 1903. Now, at the farewell party, he presented Kojima with his copy of Ludwig Schröter’s Taschenflora des Alpen-Wanderers – which he’d recently brought back from an expedition to the Southern Alps. He also asked about progress with the alpine club; when it was founded, he’d like to sign up.

Weston’s hint seems to have galvanised Kojima and his colleagues. During the summer of 1905, hundreds of letters criss-crossed the city and scores of meetings took place. A particularly important one involved Takatō Shoku (right), a wealthy landowner from Niigata, who offered to cover the proposed club’s financial losses, if any, up to one thousand yen every year for ten years. 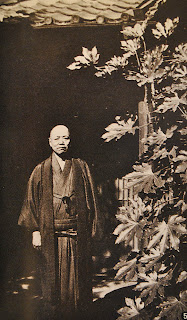 The club now had a bankroller; it remained to devise a structure. For this, Kojima looked to Takeda Hisayoshi and his cohort of young amateur botanists and beetle fans. Back in 1901, the year Takeda graduated from the Tokyo Dai-Ichi Middle School (equivalent to today’s high school), he had helped to found a club of his own, the Japan Natural History Society (日本博物学同志), complete with its own journal.

On October 14, 1905, twelve of the natural historians convened for the Society’s thirtieth regular meeting. Takano Takazō took the chair, reporting on a recent plant-hunting foray to Tō-no-dake in the Tanzawa range. After the meeting, Takeda, Takano and two more of the naturalists met with Kojima, Takatō, and Jō Kazuma, a lawyer, to agree the details of the new alpine club.

In November, the newsletter of the Japan Natural History Society announced that an “Alpine Club” (山岳会) would be established as a “sub-section” (支会) of the Society “with the aim of pursuing all manner of research on mountains or connected with mountains”. As for Takano’s write-up of his Tō-no-dake trip, this would appear in the forthcoming first number of Sangaku, as the new sub-section’s journal would be known.

Meanwhile, Kojima was assiduously placing notices about the Sangaku-kai in Bunkō, Shinchō, Shinsei, Myōjō and other magazines likely to be read by the young Tokyo intelligentsia. And with success: membership of the alpine sub-section quickly overtook that of the parent Natural History Society. In fact, four hundred new members would join in the first year.

If the Sangaku-kai could so quickly take root as an independent club, why did Kojima choose to start it as an offshoot of the Natural History Society? One suggestion is that Kojima feared that, without the respectability conferred by Takeda’s naturalists, they would fail to attract the calibre of members he was looking for.

If such were Kojima's concerns, he must have been swiftly reassured. Distinguished men of letters – or men of letters who would shortly become distinguished – flocked to join. The club's 67th member was Yanagita Kunio, later to be acknowledged as the father of Japanese ethnography, who signed up in April 1906. Shimazaki Tōson joined too, and so did Tayama Katai - whose last novel, appropriately for an alpine club man, would be entitled Zansetsu (Lingering snow).

The new club appealed to scientists too. Yamasaki Naomasa, protagonist of Japan’s ancient glaciers, was there. So were Tanaka Akamaro, the first to study lacustrine sediments in Japan, and Jinbo Kotora, who researched both Hokkaidō's geology and the language of its native people, and there were many more besides.

Early editions of Sangaku amply reflect the interests of these scholar-mountaineers. And  often, the resulting articles make for leaden reading. Yet this was a small price to pay for respectability. Alpinism had arrived in Japan. And, from the outset, it was a recreation fit for scholars and gentlemen.

Article by Kondo Nobuyuki on the JAC website about the club's origins:
近藤信行, 日本山岳会草創のころ

Previous posts in this series

Towards a Japanese Alpine Club
Posted by Project Hyakumeizan at 6:54 PM