The ahistoricity of sawa

At first sight, the history of Japanese mountaineering seems clear-cut. Monks and mystics started climbing high mountains in the eighth century. Mt Fuji got its first ascent two or three hundred years later. In the Edo period, some people went up mountains just for fun. But modern alpinism didn’t arrive until 1905, when Kojima Usui and friends founded the Sangakaku-kai or Japanese Alpine Club…

What about sawa-nobori, though? How do we fit the art of river gorge climbing into this historical sequence? My usual reference work doesn’t even try. If you look at YamaKei’s illustrated history of Japanese mountaineering, the topic is relegated to a couple of pages in the last-but-one chapter. Even then, the book doesn’t venture to suggest how sawa-nobori originated, or whether it relates to other branches of mountaineering.

For these origins seem to be truly obscure. According to Yoshikawa Eiichi, author of an excellent ‘how to’ book, nobody can agree if sawa-nobori represents a uniquely Japanese art, or whether it merely split off from Western-style alpinism. Yoshikawa favours the latter view, but offers no evidence. And, he admits, attitudes towards sawa-nobori have radically changed in recent decades.

When Yoshikawa first joined a mountaineering club, sawa-nobori was just a lowly rung on the ladder that led from hiking to Himalayan climbing. It ranked above mountain walking, but below rock-climbing and alpinism. Young climbers would climb sawas in ordinary mountain boots until they were confident enough to tackle big rock routes in gnarly places like Ichinokura-sawa. In those days, the mark of an expert sawa-naut was that he never got his feet wet.


Like many traditional hierarchies, this one broke down in the 1960s. During the Woodstock decade – actually, in Japan it was more of a riot-and- teargas decade – river climbing finally broke free and became a sport in its own right. Thus far Yoshikawa. I’d add that the process was probably helped by the appearance of specialised kit – such as the wet socks and wading boots with brillo-pad soles that you can buy in any Japanese mountain gear store today. Now sawa-nauts were willing, eager even, to get their feet wet.

Fast forward two decades, and we find a young activist applying these tools to the ultimate sawa project. Shimizu Tetsuya spent two autumns in the late 1980s exploring every tributary and gorge of the Kurobe region in the heart of the Japan Northern Alps. This included a highly technical solo through the precipitous Tsurugi-sawa ravine. Sawa-nobori was no longer an apprenticeship for beginners; as practised by Shimizu, it had evolved into an extreme sport that drew on every advanced rope-trick in the alpine manual.

But – hold it – did Shimizu really represent a new wave? You could say that, except for his ultra-modern climbing techniques, he followed very much in a tradition. Take Kanmuri Matsujiro, for example, who spent many a summer in the 1920s exploring every nook and cranny of the Kurobe valley. And then there was Tanabe Jūji (1884-1972), another Japanese Alpine Club man, who turned away from high mountain expeditions to explore the less rugged Chichibu hills. It was among their forests and gorges, he explained, that he felt most at home.

Kanmuri and Tanabe could draw on a lengthy heritage. Their thoughts about nature can be traced through a long line of writers and poets far back into the middle ages. This tanka, by Saigyō (1118-1190), the all-terrain poet of late Heian times, captures the very essence of a sawa climb:

Come to think about it, the poem helps to explain why sawa-nobori is hard to set in a historical context. You can always pin down when a new set of techniques – such as aid-climbing or ski-mountaineering – came in. But river climbing has always been less of a technology and more of a state of mind. 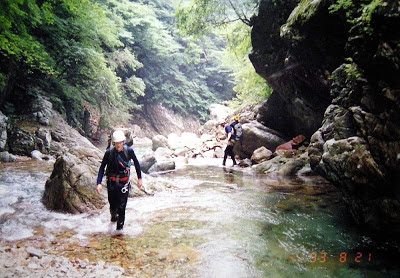 One summer, three workman alpinists set off up a sawa in the Nasu volcanic range. This was a river gorge in the Mirkwood mould, dark and dangerous. When a thunderstorm broke out, rocks started tumbling from the overhanging cliffs. The crux waterfall was surmounted by a scary pitch on steep, holdless slime, unprotectable by piton, bolt or chock.

As daylight faded, they came to a dell with a level floor and pitched their lightweight bivvy tent in a nest of panda grass. Nasu is far distant from the marquee peaks of the Japan Alps. Yet it was here that the sawa-nauts were overtaken by an odd sense – just a passing thought, really – that never again would they come so close to the heart of the Japanese mountains. 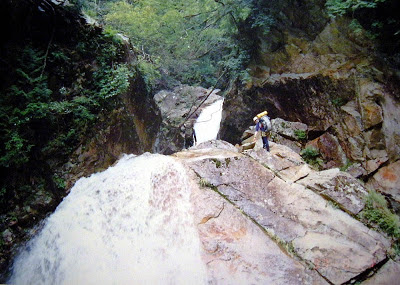 Posted by Project Hyakumeizan at 10:22 PM

As ever very interesting and nice to see all of this info in english.
Sawanobori is not a mtn pursuit I have participated in yet, but your earlier posts on your kurobe expeditions plus this one have certainly whetted my appetite.
I particularly enjoyed your last two paragraphs.