The artist who gave up his life to the mountains

In October 1944, even to think of visiting the Japan Alps was frowned upon. So there were few people around, or none, to see the bent figure start up the scree slopes of Karasawa. Hunched under his pack, the man seemed to be carrying on his shoulders the cares of the entire country. Yet, like an automaton, he kept moving, step by gruelling step, up the slanting trail towards the col. 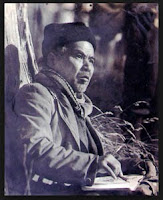 Mountains had marked all the waypoints of his life. He was born in 1888 under the southern slopes of Mt Fuji as Kageyama Inokichi. When his natural parents gave him up for adoption at the age of three, he took the name of his new family, Ibaraki. From then on, he was brought up in Yokohama, a melting-pot of cultural influences from the West.

How and when Ibaraki Inokichi decided to become an artist - and why he decided to pursue yōga, the Western style of painting - is obscure. But he learned his trade under Asai Chū (1856-1907), one of the most prominent pioneers of oil painting in Japan. Around this time, he got to know Kojima Usui, the founder of the Japan Alpine Club, who lived in the same neighbourhood.

They must have got on well. Mountains became part of Ibaraki's life. In 1907, he visited Shinshū for the first time, staying at the same hotel in Kamikōchi as Walter Weston and his wife. The English missionary scolded him - a lifelong memory - when the young artist's late-night carousing got out of hand.

In August 1909, Ibaraki was invited by Kojima to join him on a long traverse across the Southern Alps. Also in the party were Takatō Shoku and Takano Takazō, both founder members of the club, and another young artist, Nakamura Seitarō. Unfortunately, the rigours of mountaineering were too much for Ibaraki, and he had to drop out of the group before they reached Akaishi, their ultimate goal.

This didn't put him off. In 1912, he joined the Japan Alpine Club, five years after Nakamura. By this time, he'd taken up a job as an art master in a primary school at Komoro, a village that huddles under the southern slopes of the Asama volcano. Distance didn't stop him keeping in close touch with his Alpine Club colleagues - some witty, if not entirely flattering, cartoons of Kojima, Tanabe Jūji, and other club worthies date from this period.

Three years of teaching proved to be enough; in 1914, he went back to Tokyo, to attend the newly refounded Nihon Bijutsuin. There he fell in with two sculptors, Ishii Tsuruzo and Satō Chōzan, who may have influenced his style. In his later paintings, the mass and form of the mountains stand out almost in three dimensions - as in this 1935 portrayal of Jōnen-dake in early summer.

The picture is typical in other ways too. As Tanabe Jūji pointed out in the introduction to a published collection of Ibaraki's pictures, his mountains usually form the backdrop to a village, a road or some other haunt of humanity. Ibaraki was not yet a painter of the high mountains; he admired his subjects from the plains.

In 1936, Ibaraki joined with Nakamura Seitarō, Adachi Genichirō and Ishii Tsuruzo to found the Japan Association for Mountain Art. The following year, another artist of the Japan Alpine Club, Satō Kyūichirō, cast a bronze relief of Walter Weston, the club's instigator, which was installed with due ceremony close to the hotel in Kamikōchi where the relief's original had once had words with Ibaraki.

In 1942, the club decided to take the relief into safe-keeping. Feelings against foreigners were running high and, besides, the bronze, like that of many a village's temple bell, might be requisitioned for the war effort. The sad and possibly personally hazardous duty of demounting it fell to Ibaraki. The relief was taken first to Matsumoto and then to Tokyo, where it was stored in the Sangaku-kai clubroom at Toranomon.

Something had changed for Ibaraki. No longer was he content to paint mountains from the valley. Now he was driven to climb and depict them from their highest ridgelines. Yet, even as his ambitions soared, his strength was failing him: in the summer of 1943, a friend spotted him, utterly exhausted, struggling to climb a rugged gully on the east side of Hodaka.

On October 2, 1944, Ibaraki did make it as far as the hut on the col above Karasawa. And, perhaps late in the afternoon, he may have started down the Hida side of the mountain. But he never arrived in the valley, on that day or any other. As for the original Weston relief, it was destroyed during the air raid of March 25, 1945. The plaque you see today is a replica, installed two years after the war. No sign of Ibaraki was ever found.

Not a few have failed to return. Ōshima Ryōkichi and Ibaraki Inokichi are just two who gave up their lives on Hodaka. Winter climbing too takes its annual toll. Kosaka Otohiko and Uozu Kyōta are two more names, albeit fictional ones, in a roll that will never end. And with its cruel beauty the mountain will continue to lure men to their doom. (From Nihon Hyakumeizan, Chapter 55: Hodaka-dake)


Posted by Project Hyakumeizan at 10:04 PM