The alpinist who turned to art

About a late-Meiji tea party with far-reaching cultural consequences, and not just for mountaineering

Yokohama, early 1903: the exact date is lost to history, although we do know that it's 4pm on a Saturday afternoon. Two fit-looking and immaculately be-suited Japanese men are ringing the doorbell of an apartment in "B" building at No. 219 in the upmarket Yamate district of Yokohama. 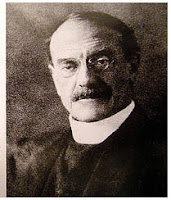 They're amused, but hide it perfectly, when a middle-aged Englishman shuffles to the door, reminding them of a character in a comic kyogen sketch - he's very short-sighted in his remaining eye, and he's forgotten to pick up his spectacles, hence the oddness of his gait in the darkened corridor. The most fateful meeting in the history of Japanese alpinism is about to begin. 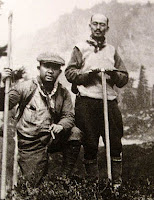 The one-eyed missionary - yes, it's Walter Weston - is delighted to meet the young Japanese. From his previous stint in Japan, he knew about the monks and pilgrims who have been climbing to the tops of mountains for centuries. But, until he heard from Kojima Usui, who has just presented himself, he'd had no idea that people might be climbing Japanese mountains for fun.

Readers of this blog will be familiar with what happens next, but here's a précis. Over a cup of tea, Kojima and Okano Kinjirō, who have recently climbed Yari-ga-take together, hear about Britain's famous Alpine Club, of which the missionary is a proud member. As a result of this conversation - and some subsequent chivvying by Weston - the Japanese Alpine Club is founded two years later, in October 1905.

But that was by no means all. Before the conversation turned to alpinism, Weston read out to his visitors some passages on "Mountain glory" from John Ruskin's Modern Painters, a five-volume book about the genius of J M W Turner. At the time, Kojima was somewhat baffled by this cultural encounter. But he later sought out Ruskin's books for himself, and so assiduously that his own writing style started to channel the sage's cadences. 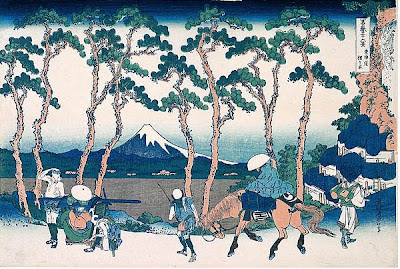 After introducing Ruskin, Weston showed his guests a mountain woodprint that he'd collected. Even works of the ukiyoe masters could be picked up quite cheaply at the time; they weren't much appreciated in their home country. This particular picture was one of Hokusai's masterpieces, the Hodogaya on the Tokaido Road (above) in the Thirty-six views of Mt Fuji series. "And now, for the first time", Kojima records, "I appreciated that ukiyoe was an art form that should by no means be despised." 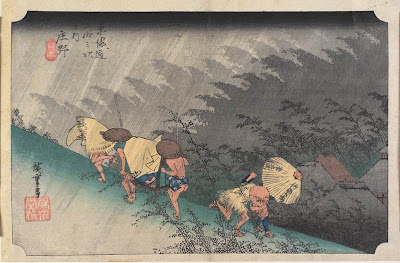 This too was a cultural learning with consequences. Soon, Kojima was collecting for himself. His banker's salary gave him the means and, besides, prices were still modest. Among other classics of the ukiyoe tradition, he was able to pick up two of Hiroshige's Fifty-Three Stations of the Tokaido series - Night snow at Kanbara, and Shono in driving rain (above). He also wrote an essay about Hiroshige's Kōshu Diary, one of several books on Japanese art that appear in his collected works. 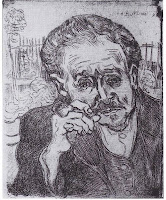 In 1915, the bank sent Kojima to run its branches in San Francisco and Los Angeles. The posting would last for 11 years. That gave him the opportunity to start collecting Western prints, largely etchings. Usui's passion for art is revealed in his diaries. He records how one day, after discovering a Millet and a Whistler in a small Los Angeles frame shop, he went out and skipped through the pouring rain. He also bought versions of Van Gogh's Portrait of Dr Gachet (L'homme a la pipe, right), Gauguin's Nave Nave Fenua (Terre delicieuse) and three Picasso etchings.

In the end, Kojima amassed around 900 Japanese prints and more than 500 Western ones. The international reach of his collection mirrored his positive, late-Meiji attitude to the world. Unlike the nationalism of Shiga Shigetaka, one of his mentors (and later an honorary vice chairman of the Japanese Alpine Club), there was nothing defensive in Kojima's stance towards the West. The unequal treaties were on their way out even before he'd started his career.

Kojima's home life was expansive too. His family went with him to America and they came home with nine children. Sixty years after Kojima himself passed away, one of his heirs sold the art collection to the Yokohama Museum of Art. Appropriately, it has stayed in the city where Kojima grew up. An exhibition was mounted in 2007, just over a century after the momentous afternoon tea appointment with Walter Weston.

Posted by Project Hyakumeizan at 6:38 PM

Here's a link to Ruskin's "The Mountain Glory," for those interested.

Many thanks for the link, Ted - have embedded it in the main text...

Far from redundant, Ted - "Modern Painters" hasn't been printed for decades (perhaps for more than a century), and so the link you pointed out is invaluable - the only way to read the chapter ....