Nineteen-sixty-four was when Japan got its mojo back. It was the year the Olympics came to Tokyo and when Prime Minister Satō Eisaku took on the mission to double the national income. The Tokyo monorail started running in September, and the first bullet trains a few weeks later. For sheer high-tech panache, though, those feats were upstaged when a grossly overloaded helicopter came flailing in towards Japan’s highest summit. 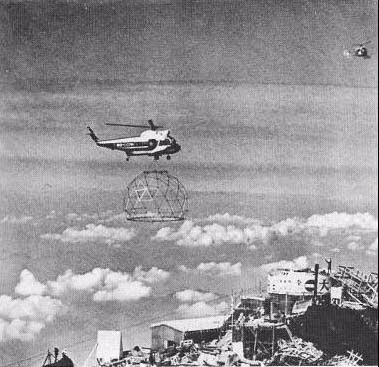 August 15, 1964 was an exceptionally calm day on Mt Fuji. It had to be. Onlookers held their breath as they watched the boat-hulled Sikorsky edge closer. They knew the cage-like structure dangling from the S-62’s load-strop weighed something like 600 kilos. They also knew that the helicopter could normally lift only 450 kilos while hovering at this height. To save weight, all surplus kit had been stripped from the helicopter, side-door and co-pilot’s seat included. Even so, the approach would be touch and go.

It’s unclear – at least to this blogger – exactly who decided to build a radar station on Mt Fuji, and when. Conventionally, the story starts with Typhoon Vera, which struck the Ise Bay region on September 26, 1959, battering and inundating the city of Nagoya. The storm killed more than 5,000 people, left an estimated 1.5 million homeless, and injured almost 39,000 more victims. 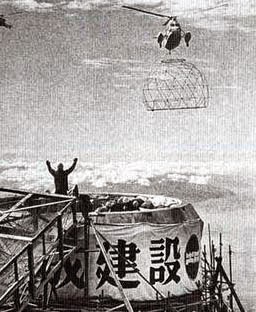 Another tragedy on this scale might be prevented if a weather radar could give better warning of a typhoon’s approach and intensity. But where to site one? You could put a radar on a southerly island, such as Hachijōjima and Torishima (both were considered). Or you could put it on high ground. From the summit of Mt Fuji, for example, a radar could look eight hundred kilometres out to sea.

Pursuing this logic, Japan’s Meteorological Agency submitted a budget request to the Ministry of Finance in 1961. The finance officials were concerned about the brevity of the building season on Mt Fuji’s summit: if the project was to be completed in two years, as planned, all the building work would have to be crammed into two summer seasons of just 40 days each.

A hard-driving meteorologist named Fujiwara Hiroto handled the Agency’s negotiations with the ministry. He argued the project could finish on time if building materials were moved up the mountain as soon as the snow started melting in the spring. This “snowline-chasing strategy” was sufficiently persuasive to secure a budget allocation of 240 million yen.

Even before building started in 1963, it became clear that existing portage methods wouldn’t work. Horses and “goriki”, the traditional carriers on Mt Fuji, couldn’t handle the volume. As for helicopters, the pilots briefly went on strike when asked to hoist panels that might flutter out of control in the slipstream. What to do? Caterpillar D2s were brought in, first to bulldoze a trail all the way to the summit, then to freight up the heavy supplies, two tons at a time.

Excavating the foundations posed another challenge. Before they could dig into the iron-hard permafrost of the summit rocks, the construction crews had to thaw it with blowtorches. Yet they kept to their schedule. By mid-summer 1964, the radar building was virtually complete, except for the all-important geodesic dome that would shelter the rotating parabolic radar antenna. 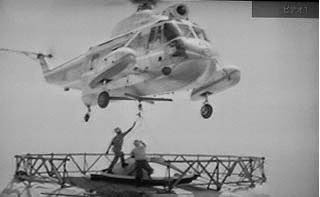 The dome could not be assembled on-site, and it was too big for the bulldozers. That left only a helicopter lift. But, even after taking out all surplus kit, the S-62’s pilot doubted if it could hover at this height. Still, the job might be managed, he reckoned, if a gentle headwind of not less than 5 knots but no more than 10 could provide the chopper with some “dynamic lift”.

As just such a zephyr was promised for the early morning of August 15, the S-62 clattered off the tarmac near Fujinomiya just after breakfast, hooked onto its underslung cargo, and started labouring up Mt Fuji’s southern flanks. Climbing to just above the summit, the pilot turned his straining craft into wind and set up his approach towards the gesticulating figure standing on the domeless roof of the radar building. Just at that moment, the breeze died and the helicopter shuddered as the pilot struggled to compensate for the lost lift. Then, while at least one onlooker braced himself for a spectacular accident, the S-62 nosed in over the roof. In that instant, workmen leapt out from cover and grabbed the structure’s rim to align it with the hold-down bolts. The dome had landed.

Thanks to this high-wire episode, the new building was completed on time. The following August, the 1,500-watt Mitsubishi Electric-built radar tracked its first typhoon. After that, the station remained continuously in service until November 1999, when the radar was switched off for the last time, and its faithful service toasted in frozen beer at a “gokuro-sama” party under the radome. In 2004, the summit weather station closed too, ending 72 years of continuous human habitation atop Mt Fuji.

So much for the outline history. But, as you’ve noticed, this narrative stays curiously mum on who exactly was the first to propose siting a radar station on Mt Fuji. An obvious place to look for a smoking gun would be Fuji Sanchō, a lightly fictionalised account of the project. The novelist, who went by the nom de fudè of Nitta Jirō, was none other than Fujiwara Hiroto, the real-life Meteorological Agency man who handled the discussions first with the finance ministry and later with the big electronics companies that competed to supply the radar.

Unfortunately, Nitta sets his opening scene in the Finance Ministry, shedding little or no light on how the project started life. There are hints, though, that the novel’s hero, a not-even-thinly disguised Nitta/Fujiwara, had been following the technology ever since Japan set up its first weather radar during the early 1950s. That adds up. By background, Fujiwara Hiroto was a wireless engineer, not a meteorologist, and had spent his career mainly in the Agency’s instrumentation department. So perhaps the novelist was, quite literally, the author of his own story.

Another suspect is Fujimura Ikuo (we’ve met him before, as the instigator of the famous Mt Fuji ‘sit-in strike’ in the winter of 1932). Like many members of Japan’s business and administrative elite, the long-standing head of the summit weather station was fond of a game of go. At some point, perhaps in 1960, he was challenged to a match at the summit of Mt Fuji by Kobe Michinosuke, the president of Hazama-gumi, a construction company.

At this point Kobe’s staff intervened, fearing their boss might not survive the rigours of the climb. Graciously, Fujimura agreed that the match could instead take place at the Fukuda-ya, a favourite go venue in Tokyo. In gratitude, the company president asked if he could do anything in return. Fujimura thought for a moment before replying: “Give me a radar station.”

fascinating story. I'm always amazed at how you can dig up this historical information in stockpiled accounts all in Japanese.

And thanks to your digging, we now know the origin of those bulldozer trails that zigzag up to the summit.

I think I remember once seeing one of those bulldozers. Very slow, incredibly noisy, even from a great distance. I guess this recollection dates me somewhat ...