"Tei: A memoir of the end of war and beginning of peace"

Book review: how Tei Fujiwara brought her children to safety from Manchuria

This blog usually concerns itself with the mountains of Japan. But I hope reader(s) will excuse me if I introduce a book that has nothing much to do with mountains, unless they are those that lie athwart Korea, square across the path of desperate refugees fleeing from northern China in the second world war's aftermath. 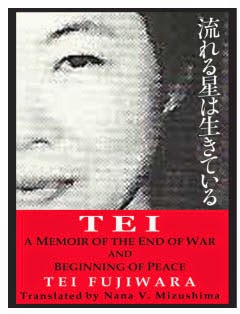 One of those refugees was Fujiwara Teiko. Married to a meteorologist, Tei was one of the two million or so Japanese who lived in Manchuria and other parts of China during the 1940s. When the war ended, the Japanese military left the civilians to fend for themselves. More than 11,000 settlers died in the post-war turmoil, about a third by their own hand.

Those who wanted to live fled southwards, in the so-called hikiage. This book - originally entitled Nagareboshi wa ikite iru, quoting a song that gave the author hope - is the account of how Mrs Fujiwara brought her two sons and baby daughter to safety in a year-long odyssey down the Korean peninsula.

After her husband was taken to a Soviet labour camp, Mrs Fujiwara found herself alone, destitute and hungry. Before the journey south could continue, she had to survive - and keep her children alive - through a harsh winter in what is now North Korea, living on a cup of rice per day. Soon even that ration was cut.

Desperate privations throw the characters of her fellow refugees into stark relief. Some fellow Japanese cheat her. An unknown Korean gives her food, at the risk of his own reputation or even life. There are Soviet soldiers who give her cloth from their stores so that she can make rag dolls and sell them on the street.

This is a book that raises questions. As in, how would I behave if torn out of a comfortable middle-class existence and subjected to the pressures and deprivations of a refugee camp? And how do you summon up that last ounce of strength to cross the mountains that bar the way to safety? This is how Tei answers that question:

The road into the mountains wound its way into a valley between other mountains and turned into a narrow, shriveled trail. Eventually, even the trail disappeared. We followed the shadows, which swirled like a beautiful obi, on and on to the horizon.

The red mud on the trail refused to let go of our feet once we stepped in it. Sometimes we stuck in the muck up to our knees... If I had had to drag my boys, as I had done through the night, I couldn't have gone a step further. We would have sunk into the earth and died. Everyone went ahead of me and disappeared into the rain while I fell behind and was left alone on the trail. Somehow, I kept moving, driven only by the knowledge that my two boys were moving up ahead.

The rocks closed in from both sides. If I could get through this place, I sensed that there would be something up ahead. But what I found up ahead was a woman who had lost her mind...

Eventually, Mrs Fujiwara made it to the port of Busan, in the south of Korea, and was repatriated to Japan in September 1946. Three months later, her husband came back to Japan after being released from a labour camp in northern Manchuria. He had fared relatively well there, thanks to his skills as an electrical engineer, which proved useful to his captors.

In 1949, Tei Fujiwara wrote up her experiences, partly as a "last testament" to her children in case she succumbed to the after-effects of her ordeal. In the event, she not only pulled through - and is still alive today - but her book became a best-seller. It has recently been ably and fluently rendered into English by Nana Mizushima, who says in her translator's introduction:-

I try to write in a natural style which is enjoyable to read. I believe the translation should be invisible, just as the camera is invisible in a good movie.

Let me just say here that she has succeeded magnificently. I read the book on a long and delayed journey across Europe and hardly noticed the time passing.

There is a final twist to this tale. Tei's husband resumed his career as a professional weatherman and rose to head up the Meteorological Agency's equipment division. In this role, he played a key part in commissioning the radar station on top of Mt Fuji. But he soon noticed that his modest official salary was eclipsed by the money rolling in from his wife's book. His competitive spirit piqued, he decided to try writing for himself.

Today, the works of Nitta Jirō - as Fujiwara Hiroto styled himself for literary purposes - are better known than his wife's. He was certainly more prolific, putting out four full-length historical novels about Mt Fuji alone. And his recreation of the Death March on Mt Hakkōda was made into a memorable film. But he never wrote at any length about his own experience of the hikiage. The memories were probably too painful.

Tei: A Memoir of the End of War and Beginning of Peace, by Tei Fujiwara, translated by Nana V. Mizushima

Yet another one of your posts that has resulted in me purchasing a book. It was a great read. After I finished it I looked at my copy of Death March on Hakkoda and there at the back was a photo of Nitta san.
Happy new year to you and looking forward to many more of your postings this year, plus the book.

Excellent that you bought the book, Iain. My own interest was piqued by a very short item in the Japan Times books section - the link to Nitta Jiro was an additional inducement. Like you, I bought the book and was impressed both by Tei's storytelling and by the quality of the translation. Amazingly, though, there are few or no other reviews of this book, online or in print. So I thought I would do my own. Pleased to be of service....

Thank you for a very nice, detailed review. And the details about Tei Fujiwara's husband which are very interesting.