Unexpected perspectives from a spring ski-tour in a forest

The beech woods, as we skied through their bare arcades, looked somehow familiar. We were back in Tokyo before it came to me. Those cloister-like perspectives fading into shadow, the gaudy figures flowing through them, these came straight out of a painting I’d seen. Only, instead of admiring the Hunt by Night on a gallery wall, we'd traded places with the very courtiers that Paolo Uccello once painted. Or so it seemed for an instant. 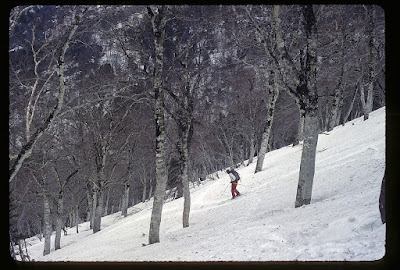 Shibutsu is a mountain of unemphatic charms. Its time-worn layers of serpentinite can’t compete with the volcanic sprezzatura of Hiuchi, just across the valley.

The reason some Hyakumeizan fans save it till last, writes Wes Lang in his guide to Hiking in Japan, is that the characters of its name (至仏) mean “go to the Buddha”. This makes the summit an auspicious place to end a quest for all One Hundred Mountains.

In Nihon Hyakumeizan, Fukada Kyūya pours a dash of cold water on this idea. Probably, the mountain’s original name had nothing to do with Buddhism, he says. Instead, the characters were just used to spell out a local place-name in an ad-hoc way. “Be that as it may,” he continues, “the name Shibutsu both sounds and looks good. It strikes an almost literary note.”

For Fukada, the worth of Shibutsu lay in its views. “I believe that was the first time I had ever looked down on the fabled plain of Oze," he recalled after climbing up here in the autumn of 1926. "The lambent, ochre-coloured expanse stretched away to the foot of Hiuchi’s pyramid in the distance. I thought myself a happy man to have seen the beauty of Oze for the first time from the summit of Shibutsu.”

On a grey March day, the plain of Oze is not in the least lambent. Under its blanket of waterlogged snow, the marsh looks more like a deserted carpark. Those beech woods, though, in their winter dignity, they might, if you’re lucky, let you ski for a moment through the depths of a Renaissance panorama.

Posted by Project Hyakumeizan at 6:58 PM