October 16: “Ara-mah!” The Sensei’s exclamation of surprise is more than justified. For what could be more improbable than a chance meeting, well into the twenty-first century, on a local train somewhere in Hokuriku, between the instigator of Nihon Hyakumeizan, a book first published in 1964, and its translators more than half a century later.

Yet, without a doubt, the figure balancing carefully towards us along the swaying railcar is none other than Ohmori-san – who, as a young magazine editor back in 1959, saw fit to commission a series of essays about one hundred selected Japanese mountains. We first met him last year, at the Japanese Alpine Club in Tokyo.

The three of us are on our way to Daishōji, the small town between Fukui and Kanazawa that numbers the Hyakumeizan author as one of its most famous sons. We’ve been invited to a seminar on the book’s translation by officials of the Fukada Kyūya Yama no Bunkakan, a museum to the writer’s memory.

The Bunkakan is a graceful old wooden building, shaded by a magnificent gingko tree in its courtyard. In Fukada’s youth, it housed the offices of a textile firm. In an aery first-floor room, floored with tatami, I expound on the role that the “white mountain” Hakusan played in the Englishing of Japan’s most famous mountain book. 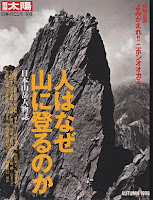 Hakusan was Fukada Kyūya’s native mountain. It was the first high one he climbed – indeed, the same is true for his translator. While a student in Kyoto, I climbed Hakusan with the Sempai.

Then, when I was at a loss on how to research the book’s introduction some years ago, it was the Senpai who brought me a copy of Heibonsha’s “Hito wa naze yama ni noboru no ka” (Why do people climb mountains?). This very readable history of Japan’s mountaineering history was co-edited by a certain Ohmori Hisao. Yō no naka wa semai, na …

After the seminar, we are invited to pay our respects to Fukada’s grave. The Sensei and I decide to walk there, taking in the author’s childhood home on the way. There is still a small printshop at the address, just as there was in Fukada’s day, although the business has since passed out of the family. A photo at the Bunkakan shows a young Fukada (with bicycle) standing in front of the house. 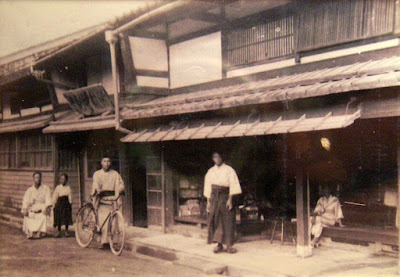 Daishōji is still a quiet country town where, if you listen carefully, you can catch a few echoes from Fukada’s evocation in Nihon Hyakumeizan:-

My native mountain is Hakusan. You could see it from the top floor of the house where I was born, from the gates of our primary school, from the banks of the river where we used to catch minnows, from the sand dunes of the beach where we swam, in short from just about anywhere in our town. There it was, right in front of us, noble and beautiful. As the name promises, it was a white mountain for fully half the year.

We wander into a shrine on the wooded hill that bounds Daishōji’s southern edge. Entering the peaceful grove, we realise that, not for the first time, we are uncertain of our position.

Back in the street, a random passer-by must be accosted. Fukada Kyūya’s grave? Certainly – you’ll find him up that flight of stone stairs, through the gateway. It’s good to be in a town where everybody knows your favourite author. 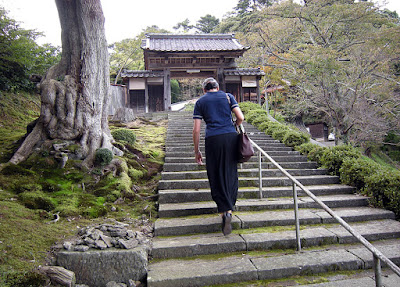 Fukada’s gravestone is a simple granite stele. You could see Hakusan from here, our guide tells us, until yonder pine tree grew up. We then walk to Enuma Shrine to visit another, more elaborate, memorial to Fukada. 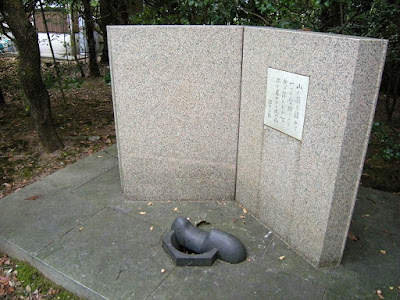 The stone panel is engraved with one of the author’s best-known poems. 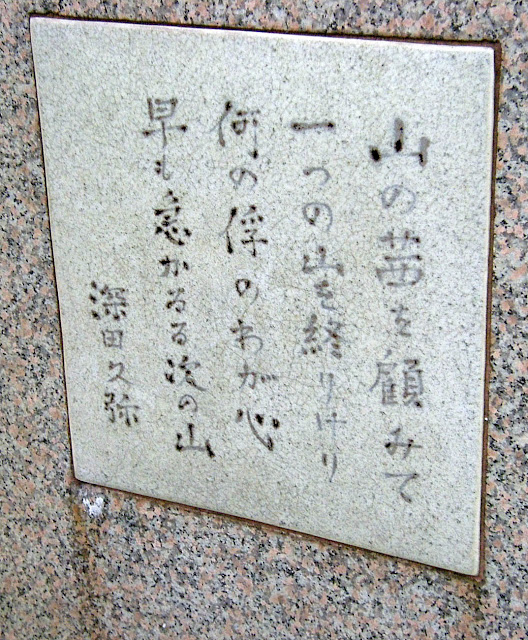 Before supper, we have a few minutes in the Yama no Bunkakan’s museum. 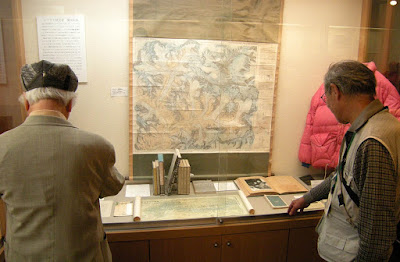 Ohmori-san and I linger beside a cabinet with one of Fukada’s manuscripts, a copy of Bungei Shunjū, one of Japan’s leading critical monthlies, and a 1959 edition of a now-defunct mountaineering magazine. Together, these items sum up the genesis of Nihon Hyakumeizan, but it’s best if Ohmori-san tells the story:-

As Hōbundō was a small company, I had to do everything by myself. While editing books, I also had to help edit magazines. Thanks to this, I acquired the necessary skills on the job. One day, the editor of the monthly magazine Yama to Kōgen (Mountains and Highlands) retired, and I was asked to take on this work.

Just then, I came across Mr Fukada’s essay on “Uncrowded Meizan – in pursuit of repose and solitude,” which he’d written for a special issue of Bungei Shunjū. It was in this article that he first floated the idea of ‘a hundred famous mountains of Japan’. “That’s it!” I thought to myself – this would definitely make an excellent project.

You see, I wanted to make something more of this magazine than just something for outdoor or mountaineering club members. And the literary prowess and the mountain experience that Mr Fukada brought to the table was exactly what I had in mind. So I called on him at his home in Setagaya, did some negotiation with him, and got his agreement to write. 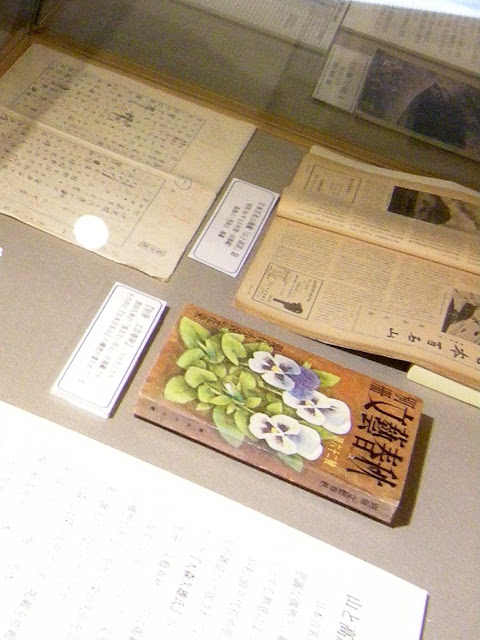 Regrettably, you won’t find this history in the introduction to One Hundred Mountains of Japan – that’s because I only learned it after we went to press. But I hope to correct this omission, if there is a chance to reprint the book one of these days. 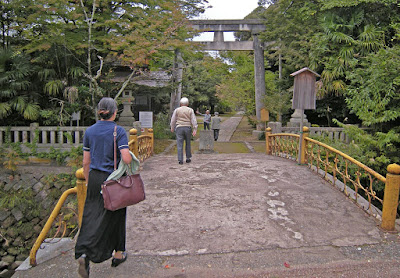 Over supper – we are now in a fine ryōtei – we are introduced to Oki Masato, a retired professor of architecture, who has recently published an authoritative book on the Indian Himalaya. Even without this information, I can see by Oki-sensei's bearing that I’m sitting opposite a veteran of the Greater Ranges.

In the early 1960s, Oki-sensei was one of many young climbers who visited Fukada Kyūya at his Setagaya home to seek advice on unclimbed Himalayan peaks. In 1965, as a member of the renowned Meiji University mountaineering club, he took part in a first ascent of Daulaghiri II (7751m). It is probably no coincidence that Fukada reminds us in his Hakusan chapter that Daulaghiri is the ‘white mountain’ of the Himalaya.

Our conversation is momentarily drowned out by some lively demonstrations at the other end of the table. One of our hosts is to be heard toasting Ohmori-san on commissioning Nihon Hyakumeizan. Ohmori-san brushes aside the compliment: “It was the obvious thing to do.” Our host is unabashed: “It’s a book that brings people together” he insists. And with that nobody can cavil.


Posted by Project Hyakumeizan at 7:30 PM