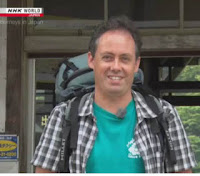 October 18: The answer is the snow-covered summit of Jiigatake. At last, I can reply to the question so many people have asked me – that is, from which vantage point in the Japan Northern Alps did Peter Skov take the photo that adorns the cover of One Hundred Mountains of Japan?

The question can now be answered because Peter and I have met up at last, in a station coffee shop at Higashi Omiya, close to his workplace. I say, at last, because – incredible as it may seem – this is the first chance we’ve had to actually meet, although Peter several years ago volunteered his magnificent image for the book’s front cover (left), sight unseen of the publisher or translator.

Taken on a mountain hike in late 2007, the original picture (below) also appears in Peter’s first photo book, The Japan Alps and in an online album. The view is westward, across Obuchizawa, towards Harinoki in the foreground and Yakushi in the far distance. For me, and I hope the book’s readers, it captures the essence of the Japan Alps: “vast, mysterious, sublime, as if wrapped in some purple cloud”, as another mountain artist expressed it.


Sipping a less than sublime iced cocoa from a plastic receptacle, I put the inevitable question – what kind of camera did you use? It seems that Peter, like this blogger, decided to stay aloof from the mediocre early generations of digital cameras. So this picture was taken through a 24-85mm zoom lens on an old-fangled Minolta SLR with Fuji Velvia film, which may at least partly account for the subtlety of the image’s colours and tones.

A book prominent on both our bookshelves is Mountain Light, a kind of photographic manifesto by the late but still inspirational Galen Rowell. As Peter points out, pictures like this one amply vindicate Rowell’s claim that, if handled with care, 35mm film cameras can produce printed images that give larger formats a run for their money.

Peter’s freezer is still full of film, but these days there is less time to use it – the arrival of a baby daughter, the Skovs’ second child, has ruled out long mountain weekends for now. So what does a mountain photographer do when he can no longer get to the mountains? Peter’s answer was to change both focus and medium.

Picking up a used Sony digital camera – handier than film for dealing with weak early-morning light – he started photographing scenes on his way to work in Saitama. Appropriately, the inspiration for this project came as he was descending from one of his last mountain hikes, on Ryōgami, a member of the Hyakumeizan. 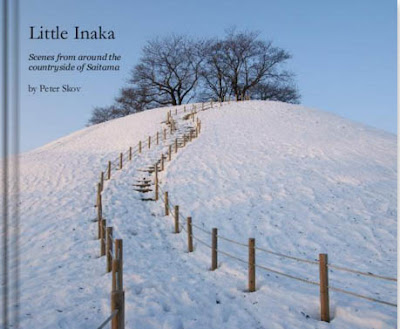 The resulting collection, Little Inaka, is a reminder that you don’t need to visit a national park to find camera-worthy scenery in Japan. And Peter demonstrates that you can apply the same skills to the woods near your house as you do to the Japan Alps, alternating the broad panorama with season-by-season micro-landscapes worthy of Elliot Porter, another influence on his work.

I also appreciate the colour palette of this collection. It’s lively enough to sustain the images, even on the printed page of the Blurb edition, but stops well short of the spectral and tonal shoutiness that seems to have overtaken so much landscape photography these days. One sign that Peter has hit the right note is that it’s all but impossible to say, if you didn’t know already, whether the original medium was film or digital. These are colours that you'd recognise in nature.


The Sakitama burial mounds – a group of tumuli from the third to the seventh centuries – appear several times in Little Inaka – indeed, one is on the cover. Their enigmatic forms run through the seasons as a kind of unifying theme, rather like the school belfry in Maeda Shinzō’s Seasons of a Hilltop Tower.

Alas, there won’t be any more images of Sakitama for the moment. Last summer, the Skov’s moved house, taking the burial mounds and other Little Inaka sites out of early-morning stroll range. But Peter is already scouting new locations for the next photographic project. And, who knows, NHK may be back with another idea for a mountain documentary – the last one took Peter back to the Northern Alps.

“When artists get together, they talk about where you can buy cheap turpentine,” said Picasso. I could talk about turpentine – or cameras, lenses and locations – all afternoon with Peter. But the next appointment beckons, far across that vast abyss of time and space that men call Tokyo. I remember only when I’m on the train that I forgot to take a photo of Peter. So this post will have to do with a screenshot from his NHK page. Mōshiwake arimasen....
Posted by Project Hyakumeizan at 9:30 PM

"Japan Alps" and burial mounds with no mention of William Gowland? :-)

Was William interred at Sakitama?

No sir, according to wiki he's resting at East Finchley cemetery in London, https://en.wikipedia.org/wiki/William_Gowland.
I enjoyed your Kurobe NHK documentary. Any chance of you making any more?

Iain: it's good to hear from you - we must catch up soon. As for the William Gowland-Japan Alps link, yes, you're right: he was the original bestower of the "Alps" label on the Hida mountains of Honshu. This, if I recall rightly, was in a chapter of the Satow-Hawes guidebook "Handbook for Travellers in Central and Northern Japan" published in 1881. He was also the first foreigner to climb Yatsugatake - Kojima Usui says so. But he was much more interested in archaeology than in mountains. However, as his workplace was the Osaka Mint, I wonder how much he was able to explore ancient burial mounds on the edge of the Kanto plain. Did he ever visit the Sakitama mounds? Perhaps a quick trawl of that invaluable RGS library would answer the question....

PH; I did indeed do a quick search on Gowland visiting Sakitama but didn't find a positive answer. Maybe his book "The Dolmens and Burial Mounds in Japan" has the answer?
He was also probably the first foreigner to climb Yari amongst other peaks with E Dillon, who i discovered hunting around online earlier this year, was also an employee at the Mint.
A very late congratulations on the publication of the book. After originally reading this time last year, I have also delved into it many times since.

Sorry - yes - I meant "the first foreigner to climb Yarigaktake" (confirmed by Kojima Usui, who heard it from a colleague at the Mint). As for the dolmens book, alas, the local library doesn't have a copy, and so the Sakitama Question will have to wait for now...

If Gowland was employed at Osaka Mint, then he most likely explored and wrote about the many burial mounds in Kansai. There are dozens of kofun in Sakai city alone, with more spread out among the Nara Plain. But who knows? Maybe he was a mound hound and did travel up to Saitama as well

It's interesting how so many photographers are steering towards digital photography. It's so much more convenient than film, but there's something about it that's not as raw or honest... It takes so much patience to use film. I've never done it myself, but I had friends who did it as an elective in High School. Since I graduated high school the black room vanished! All the photography there is digital now.

Your description of his book "Little Inaka" reminded me that I am constantly seeing sights in my little community in Fukui that inspire me. I feel like I live in my own "Little Inaka." On my commute to school, when I ride my bike, sometimes I have to stop and admire the river and the mountains and the reflections in the rice fields and remind myself that I'm truly in Japan. I think there is beauty everywhere if we stop and notice it!!!

Hoi Amber - thanks for reading. The number of comments on this post almost persuade me that I should stop posting about "mountains" and start on a photography blog instead. As for your own "Little Inaka", I hope you'll record it as much as possible. Only one thing is certain - in thirty years, the scenery will look much different, and it would be worth having a record. Never mind whether film or digital....

In case anyone's interested my guess is that Gowland probably did visit Sakitama. At the end of one of Weston's talks at the RGS in 1895, Gowland also addressed the audience recalling his memories of Japan and spoke specifically on the dolmen around Nagano and Matsushiro and went on to say "Remains....I have found in my explorations of the great dolmen districts in the centre of Japan..."