Up on Piz Palü, the triple-headed ridge that towers 3,901 metres into the sky above Switzerland’s Engadine valley, a slight figure is seen wrestling with an unwieldy camera. In the early 1890s, all cameras are unwieldy. A long exposure will be needed for the “slow plate” to record a distant view of Piz Verona, as glimpsed against a backdrop of boiling afternoon clouds. Surprisingly, and against all convention, the lens is aimed directly towards the sun…


Against all convention! When Elizabeth Burnaby first went up an alp, at the age of twenty, this was the thought that transfixed her great aunt: “Stop her climbing mountains,” screeched the aged relative, “She is scandalizing all London and looks like a Red Indian.”

In the end, all Lady Bentinck’s worst fears came to pass. In recent years, her niece has been canonised as a pioneer of women’s climbing. Yet this may be to short-weight her. In truth, Mrs Burnaby pushed the limits of what was then possible – for men as much as for women. And, as we will see, she pursued her mountain photography in much the same way.

Ironically, Mrs Burnaby discovered the Alps only because she’d cleaved to the letter of the social code. As sole heiress to a family fortune, she’d married at the age of seventeen, in 1879, and duly borne her much older husband a son in the very next year. Fulfilling these duties may have taxed her. Soon afterwards, her doctors sent her to recuperate at an alpine resort.

While at Chamonix, she made a guided excursion on Mt Blanc. That was the start of her mountaineering. It was also the first time that she’d ever had to pull on her own boots: until then, maids had always done that for her.

Around the same time, probably in 1881, she learned how to use a camera. Her mentor was Joseph Tairraz (1827-1902), who founded a dynasty of mountain photographers. This was just twenty years after Louis-Auguste Bisson had exposed the first glass plate ever to be carried up onto the summit of Mt Blanc.


In both alpinism and photography, Mrs Burnaby pursued the steepest of learning curves. In 1882, with guides, she made three first ascents, all in winter. By 1883, no guide was needed when she led a beginner – a gentleman, we presume – up the Col du Tour (3,281 metres). In the same year, she published her first mountain book, The High Alps in Winter; or, Mountaineering in search of health, illustrated with her own photos. And this was just the beginning of a remarkable alpine career.


From 1885, she sojourned most of the year at in the Swiss resort of St Moritz. The following year she re-married, following the death of  her first husband. Becoming Mrs Main did not slow her mountain activities. On the contrary. Sallying out from a first-class hotel and employing the region’s top guides, she made a string of first winter ascents in the region, including the first out-of-season traverse of Piz Palü.

Later, when the Alps got too crowded, she explored the mountains of northern Norway, notching up yet more first ascents. Thus, she was an obvious choice for president when a Ladies Alpine Club was founded in London in 1907 – the original Alpine Club wouldn’t let the ladies in until the 1970s. And she was re-elected to that post a second time in 1932, shortly before her death.

As you’d expect from somebody capable of climbing and descending 2,200 vertical metres all in a single winter day – this was on an Italian peak called the Disgrazia – Elizabeth Main took the same hard-driving approach to her photography. By 1895, she felt confident enough to publish Hints on Snow Photography. 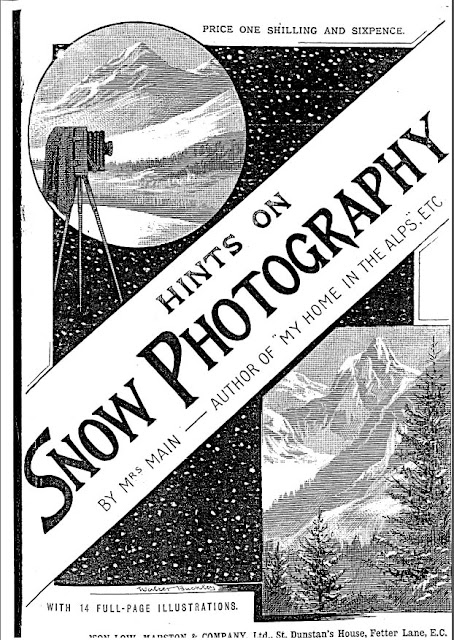 The title is a bit of a sandbag. The slim brochure – running to just 14 illustrations – is really the world’s first manual on the challenges of alpine image-making. Mrs Main cuts to the chase in the section on “Above the snowline”, which starts with what might now be called a “humblebrag”:

Many climbers now-a-days carry a camera during their expeditions, and some have reached a high level of artistic feeling and technical skill in their work. My own mountain photographs are so far excelled by those of Signor Vittoria (sic) Sella, the late Mr. W. F. Donkin, and others, that I hardly feel I have a right to give advice. Still, I can perhaps help to smooth the path of Alpine photography for a beginner, so I reproduce a few examples of my work, with such comments as occur to me.

Odd that she let his name be misspelled. For she knew Vittorio Sella (1859–1943) personally. They’d joined forces at Zermatt back in 1883, when both were vying to make the first winter ascent of Monte Rosa, Switzerland’s highest peak. In the end, Arctic conditions turned them back at 4,200 metres, freezing the champagne and very nearly Mrs Burnaby’s nose too.

To invite comparison with Sella, even via a modest disclaimer, was to align herself with the top professionals of the age. In Wikipedia’s words, Sella was an Italian alpinist who took some of the finest mountain photographs ever made. The exacting detail and rich, silvery tones of his images were captured on glass plates measuring no less than 30 centimetres by 40 centimetres. As artworks, the resulting images are monumental in both scale and subject.


Not that Mrs Main had any intention of following in Sella's bootprints. For a start, his type of kit was too heavy. In keeping with her light and fast climbing style, she wanted to take pictures where none had yet ventured with a camera. So she looked to the latest technology for weight savings. In effect, her Hints on Snow Photography are a manual for the late-Victorian lightweight alpine photographer.

Take the “slow plate” she used for that contrejour portrayal of Piz Verona. Consisting of a gelatin-based emulsion on a paper backing, such products had only been available for a few years when Mrs Main slotted one into her camera on Piz Palü. This particular plate was made by the London-based duo of Wratten and Wainwright, who launched the first examples in the late 1870s. She doesn’t record, though, whether or not the plate was exposed in her beloved Shew Xit, a folding camera named after a character in a forgotten historical novel.


Film was an even more revolutionary medium. Although the first celluloid-based rolls didn’t appear until just a few years before Mrs Main published her Hints, one of the manual’s illustrations was taken on Fitch’s film “developed with Eikonogen”. Alas, Fitch’s film was too slow “for so-called instantaneous work”, such as pictures of skating, curling, tobogganing and “lawn tennis in winter”. These required faster Lumière plates, which could be obtained “in all sizes, both English and foreign, direct from the makers at Lyons”.


Lumière versus Wratten, plates versus film; very probably, such debates raged among Victorian photographers much as they do among modern gearheads. But these eructations are a guy thing. In her Hints, Mrs Main concerns herself only with the skills and tools that get the job done. Lenses sometimes get a mention, but the differences between various camera marques are beneath her notice. As a result, most of her advice has aged well:

The following rules apply to the reproduction of snow-covered landscapes, whether in winter or above the snow line in summer, as distinct from photographs of moving objects on snow. Slow plates or films give the best and most certain results. The smaller the stop, the finer the detail. Fineness of detail is essential, as otherwise snow becomes monotonous owing to the uniformity of its colour. Expose for the high lights, rather than for the shadows.


Of course, once you get beyond these basics, photography becomes a question of interpretation. Here too Mrs Main has opinions. In her Hints, she notes that critics lambasted one of her photographs, a view over the snow-covered roofs of St Moritz, “as hard and unpleasing”, advising her “to focus, expose, and develope (sic) such subjects with the object of getting greater softness.” But that would not be her style:-

I admit that softness and those atmospheric conditions which veil a too harsh outline and vary a too uniform colouring are of great beauty, but I prefer to get them by choosing a subject in which they are present, rather than by introducing them where they do not exist, and would not be appropriate. One of the features of the scenery of the heights of Switzerland in winter is its extraordinary clearness of atmosphere, and the consequent hardness of its outlines and the deep blue of the sky. A dark blue sky, dazzlingly white snow, and well-marked shadows are what we are accustomed to in the Engadine in winter. So when photographing such scenes on such a day, I try to be truthful, and if the result is, as I think it ought to be, a dark sky, a glitteringly white outline against it, and here and there an inky shadow, say, if you will, that it is not picturesque, but do not blame me for refusing to mix the characteristics of a thunderstorm on the Italian lakes with the peculiar transparency of a winter's morning in the Alps. 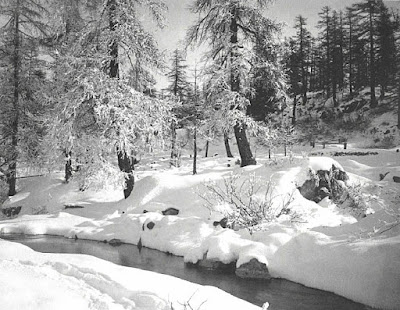 As an artistic manifesto, this is a remarkably modern view of photography. It anticipates, by more than a generation, Group f64’s razor-sharp counterblast against the “fuzzy-wuzzy” pictorialists. She practised what she preached. In a photograph of the Morteratsch glacier, wishing “to get a great deal of detail in the foreground and the background being of little importance…” she gave an exposure of four seconds on another of Wratten and Wainwright’s slow plates.


Yet the enduring lesson that Mrs Main draws from this picture goes beyond the gear: “It is always well,” she urges, “before taking such a picture, to have a clear idea in your mind as to what you want … Have what you want impressed distinctly on your brain, and you give yourself the best chance of having it reproduced on your plate.”

Have what you want impressed distinctly on your brain: such a nostrum might apply more widely than in photography. And, in her case, it did. When Mr Main didn’t work out – he died in obscure circumstances in America – she married Aubrey Le Blond, nine years her junior, and later travelled with him through China, Russia, Korea, Turkey and Japan in those last years before the first world war. This seems to have been a more equal and amicable match than her previous ones.

By this time, her mountain career was winding down. But she kept experimenting with new photographic techniques, even making short film clips around the turn of the century. She always travelled with her camera too, using her own photos, as before, to illustrate a book on Italian gardens.


Indeed, she’d always been more than a mountain photographer. In her Swiss days, she had documented lakes, woods and street scenes, as well as mountains. Passing visitors too were immortalised, Arthur Conan Doyle and Giovanni Segantini among them.


Especially poignant, to anyone who knows the place now, is the sight of cows roaming the streets of Tiefencastel. Taken together, Mrs Main’s images freeze-frame the belle epoque, in its sunniest years. There is no hint at the menace that, just a decade or so later, would overshadow that world. Perhaps that’s why her photography is all but forgotten now.