Lionel Terray on why the useless might be worth conquering

But on the icy flanks of the Caiman I had had to employ all my resources for hours on end, and had only just avoided disaster on at least two occasions. Never before had I given so much of myself or run such risks. Safely back in the valley I remained profoundly affected by the experience, which seemed of a different nature from all I had known up to then. 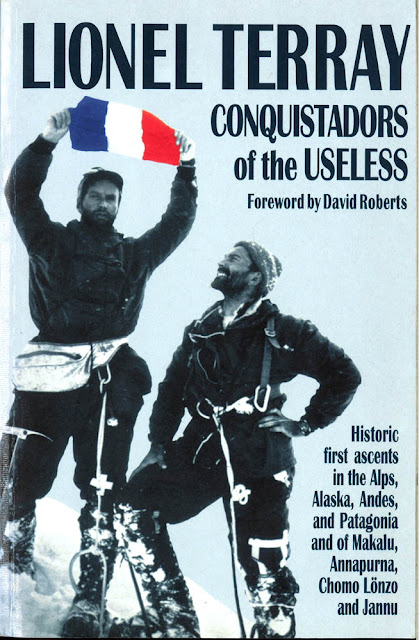 I began to question the unconscious motives which had impelled me to prefer certain books and certain courses of action. I began to realise that the mountain is no more than an indifferent wasteland of rock and ice with no other value than what we choose to give it, but that on this infinitely virgin material each man could mould, by the creative force of the spirit, the form of his own ideal.

"There is not just one but a hundred different kinds of mountaineering," said Guido Lammer. For some, as Henry de Segogne has suggested, ''the flanks of the sterile peaks become the ideal of an aesthetic, even an embodiment of divinity". For others they are "simply the background of their favourite sport", for others still "a gigantic opportunity to flatter their own vanity", and for yet others, like Maurice Herzog, "a bit of all that and something more besides": one of the few doors the modern world has left open on adventure, one of the last ways out of the armour-plating of humdrumness in which civilisation imprisons us, and for which we are not all very well adapted.

From that time on, my passion for the hills took a more precise direction, and bit by bit I worked out for myself an ethic and a philosophy of mountaineering. But, in practice, the risk and suffering involved in picking the roses that grow on the borders of the impossible call for exceptional moral strength. Doubtless, for some, it is always present; but for others it can only be summoned at rare intervals and in exceptional and perhaps fortuitous circumstances, and it is to this latter breed that I belong. In fact it was to be many years before I again committed myself to a fight as total as that which won the narrow ice-gully of the Col du Caiman.