The repercussions of a famous ascent sound an uncomfortably contemporary note

Eighty years ago, yesterday, four alpinists topped out on the Eiger, after making the first ascent of the mountain’s notorious north face. The anniversary has raised no more than a murmur in Switzerland’s media – which may not be too surprising, as this milestone in mountaineering history was notched up by two Bavarians and two Austrians. One of the latter, Heinrich Harrer, later immortalised the climb in The White Spider.


Yet one Swiss newspaper, Zurich’s Tages Anzeiger, did choose to mark the occasion. In an article entitled Bergsteigerhelden im Dienste Hitlers (Climbing heroes in the service of Hitler), journalist and historian Petra Stöhr recalls how the Reich’s propaganda machine hijacked the mountaineering achievement for its own ends.


Or was it hijacked? According to Stöhr, it was Heinrich Harrer himself who unfurled a swastika flag to mark the team’s arrival on the summit. Whether or not he did so, all four climbers were received by Hitler, feted in the press, and even written up in an official commemorative book.

During their climb, the Bavarians and the Austrians – originally two rival rope teams – had joined forces to battle through a storm. This narrative particularly pleased the propagandists, reflecting as it did a measure of alpinistic glory on the March 1938 “Anschluss” between Germany and Austria.

Stöhr’s article appeared in a column called “History reloaded”. And, indeed, more or less everything reloaded here is a matter of record, whether it is Heinrich Harrer’s political affiliations, the post-climb propaganda tour, or the ultimate fates of the four mountaineers – tellingly, they never again climbed together.


So should we just move on? Well maybe, but not without first reading the comments underneath the article’s online version. Some are illuminating. One reader says that the mountaineers were “primarily sportsmen” and not political figures. Another takes issue with Stöhr’s characterization of Harrer as the party’s weakest member: surely he would have been as fast as Andreas Heckmair, the de facto leader, if he’d worn the most modern type of crampons.

Werner Munter, a retired guide and avalanche safety expert, weighs in too. For more background on how alpine clubs were drawn into pre-war politics, he recommends reading Rainer Amstädter’s Der Alpinismus, especially Chapters 7 to 10 on Die Faschisierung des Alpinismus, Der Weg der alpinen Vereine zum Nationalsozialismus and Der Grossdeutsche Wahn des Alpinismus. Thanks, Werner, I will certainly follow up on that valuable hint. 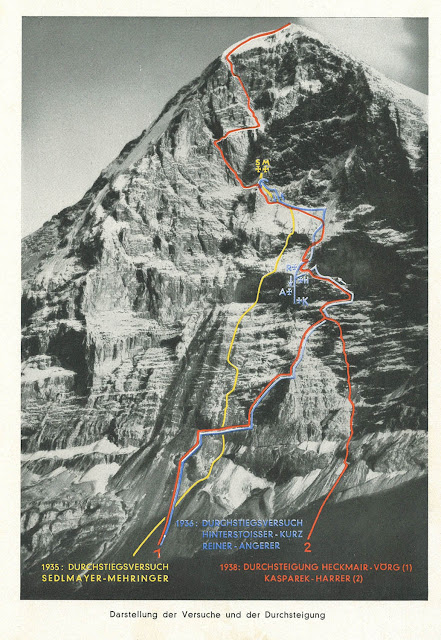 For my money, though, it’s one Thomas Wittenmeier who hits the nail on the head. Commenting on a photo of the four climbers posing with Hitler, he writes “Only the jerseys with the words ‘My Führer’ are missing. See the Özil-Erdogan team.” That last remark refers to a German footballer with Turkish roots who recently caused a kerfluffle by posing for a selfie with the Turkish president.

Surprisingly, there seems to be no recent full-length biography of Heinrich Harrer in English – indeed, if a quick scan of Amazon is to be trusted, nobody has even translated his autobiography, a surprising gap given the global popularity of The White Spider and Seven Years in Tibet.

This is a pity. Now that world events are moving in a distinctly 1930-ish gyre, we could use books like these to refresh our memories on how swiftly politics and nationalism can corrupt mountains and mountaineering.