Mountains in the mind

How high must a mountain be? You decide ...

This you might have missed. England recently acquired a new mountain after two amateur surveyors found that a hill is one metre taller than originally thought. So Miller Moss, an eminence in the Lake District, becomes the 446th official mountain in England and Wales after it proved to be 610.1 metres high, rather than 609 metres. The official UK threshold, by which mountains are sorted from mere hills, is 609.6 metres or 2,000 feet.


The discovery was made by John Barnard and Graham Jackson, retired chemists, who have spent a decade checking the height of summits that are promisingly close to the mountain/hill borderline. Using a Leica GS15, a fancy GPS set, they occasionally demote mountains instead of promoting hills.

This was the depressing outcome when they checked out a brace of “Munros” – a list of Scottish peaks supposed to exceed 3,000 feet high. As a result, Scotland now only has 282 Munros, down from 284. In Wales, by contrast, they discovered that Glyder Fawr did top 1,000 metres after all, so that it now has to feature in the Welsh 1,000-metre challenge hill race. 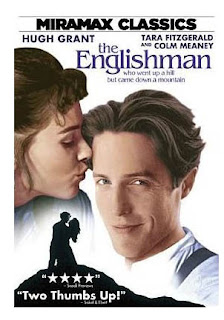 Inevitably, Messrs Barnard and Jackson have invited comparison with The Englishman Who Went Up a Hill and Down a Mountain. In this 1995 film starring Hugh Grant, a Welsh village foils two visiting mapmakers, who want to demote the local mountain into a hill, by piling a mound of earth on its top.

Strange to say, something like that almost happened in Switzerland. At the start of the twentieth century, the Fletschhorn, a mountain in the Valais Alps, was shown on official maps with a height of 4,001 metres. Thus, Karl Blodig had to visit its summit in 1900 on his quest to climb all the sixty or so four-thousanders of the Alps.

Alas, when resurveyed later in the century, the Fletschhorn had subsided to only 3,993 metres. A melting ice-cap, erosion and more precise measuring methods were probably responsible. Mont Blanc has suffered similar indignities.

But the local community didn’t take the demotion of their local four-thousander lying down. In February 1988, the municipality of Saas Grund applied to the cantonal authorities to "restore the original height of the mountain” by piling up rocks on the summit in the manner of a drystone wall.

An international controversy ensued – Wikipedia says that some opposed the plan on religious grounds – and in October 1990 the cantonal building authorities finally rejected the plan. More recently, the Fletschhorn has been further demoted – to just 3,985 metres.

Of course, the Fletschhorn’s status as an actual mountain has never been in doubt. SwissTopo, the country’s official cartographic agency, formally defines a mountain (“Berg”) as any eminence over 1,600 metres. Anything lower is a hill (“Hügel”). Place names, though, defy this convention: for example, Zurich’s Uetliberg, a wooded ridge on the edge of a city, never rises above 870 metres.

Such is the difficulty of sorting mountains from hills that most countries don’t even bother. In America, for example, the US Board on Geographic Names once stipulated that the difference between hill and mountain was 1,000 feet of local relief, but this rule was dropped in the early 1970s.

These days, the US Geological Survey side-steps the whole question by identifying only “summits” in its database of natural features and their names. Similar hassles arise, it points out, if you try to differentiate “streams” from “rivers”, or “ponds” from “lakes”.

The point is that mountains are almost impossible to define by any objective criteria. The authors of an essay on geo-semantics tell it like it is:

“There is no human-independent true definition of mountain (or forest, river, city, etc). Consequently, the definitions will vary between places and cultures, and it is important to represent local definitions appropriately … As a result, the principal mountains of England, such as Scafell Pike, the tallest mountain in England at a relative height of 912 meters, would barely be hills in the Himalayas.”

This refreshingly subjective approach would have appealed to Fukada Kyuya (1903-1971). Famously, the Hyakumeizan author looked solely to his own taste in drawing up his one hundred mountains of Japan. An eminent mountain, he thought, should have character, history and an "extraordinary distinctiveness". And, ideally, it should be more than 1,500 metres high. But two of his selected summits come in well under that limit. A mountain’s stature, Fukada believed, was more important than its height.


Japan’s official mapmakers also refuse to define mountains by their height. Indeed, they refuse to define them at all. In a Q&A on its website, the Geospatial Information Authority points out that “As every mountain is different, it’s impossible to specify that they must have an elevation of so many metres above ground level, or a slope angle of so many degrees.”

You know, that’s sound advice. And you don’t even need a Leica GS15 to apply it.
Posted by Project Hyakumeizan at 8:22 PM

And let us not forget Japan's recent debacle over the nation's shortest mountain, when 3m-high Mt. Hiyori in Miyagi usurped Osaka's 4m Tenpōzan as the lowest 'mountain' after Hiyori lost half its height in the Tohoku earthquake!