A stormy traverse of La Meije (3)

What followed, I can hardly describe. As soon as I try to put it into words, it fades into a mere shadow of what we went through. It was as if all the mountain spirits of the Dauphiné and all the devils of hell fought a huge battle over La Meije that afternoon. For four hours, they shot yellow bolts around our heads, dozens of them. 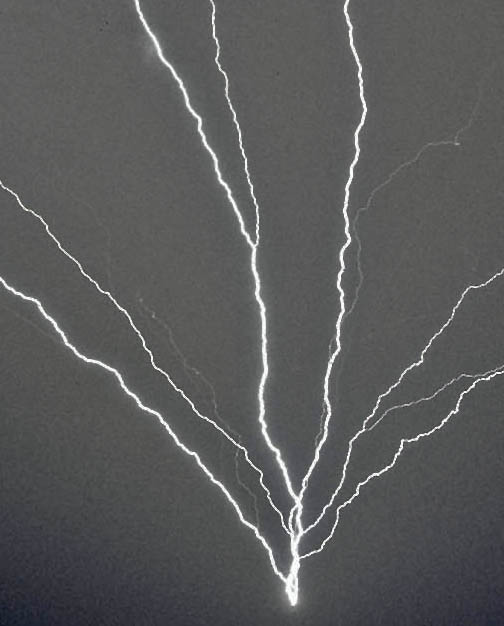 With every flash of lightning, we felt as if somebody had put a giant match to our hair. I don’t mind saying that I ducked my head as deep and quickly into my collar as I could when the sulphurous blasts flashed by. You may object that, every time, I would have been too late to duck, but you try offering your head to lightning strikes for four hours and see if you don’t bat an eyelid. Well, we did flinch, and right often too. And how it thundered! Not pleasantly as on an evening in the Ochsental Hut, where the rolling and rumbling and reverberations go on for ever. Up here, it thundered without echo or reverberation, vicious, shrill, vindictive almost as the devil. It was as if the spirit of the Meije wanted to drive us off the ridge with a giant whip. And the storm howled on, and the snow lashed our faces. Where on this Gallic field would the wild hunt end?

There’s no way off the ridge on La Meije. To the south, the cliffs fall plumb-sheer, and it doesn’t look much better to the north. So all we could do was pull ourselves together and climb. We dealt with tower after tower. Now we’d got this mountain between our teeth, we were determined to hold on. I’ve seen some weather in the mountains since that day, but never again have I met with such a hellish storm, thank God. But even this one came to an end.

The lightning was now less frequent, and the last flash struck down just as Emil and Mr Uramatsu reached the summit of the Pic Central. The air smelt sulphurous. But how was it with our two friends? A moment ago, they’d just been standing there! I was speechless with worry. Anyway, shouting wouldn’t have been much use in that storm. We pressed on. And there they were, safe and sound. Emil was standing on the nearest rock ledge down from the summit. For Mr Uramatsu, the outcome was less comfortable. He’d rescued himself with a well-judged leap into the somewhat less steep north face, where he sat on a stone with his head down, like a goalkeeper waiting for the next shot. But this did not come.

We hurried down the last unpleasantly snowed-up rocks to a chimney, which we thought would lead to the way off the ridge towards the glacier. Once again, we fed the reserve rope into a sling and we swung over the bergschrund to the Glacier de Tabuchet, where we were finally sheltered from the cruel wind.

Our watches showed six minutes past four. Fog sat heavily on the glacier, so that we couldn’t see two meters ahead of us. It snowed and snowed. We’d left the Grand Pic on dry rock; now there were 20 centimetres of fresh snow on the glacier. Quickly, I scanned my mental map of the ground. On the right must be an icefall, and not far left of this was the hut, on the Rocher de l' Aigle.

We roped up quickly, leaving our reserve rope in place for the two Austrians. Where could they be? Now we trudged downhill into the thick of the fog. I kept right, intending to go left as soon as any sign of the icefall appeared and look for the hut. Then, lo and behold, the wind blew the fog aside for a moment and we could see, just 50 meters and slightly to our left, the outlines of some crags and a hut.

A warm feeling that we were home and dry suffused us. A few more steps and we would be able to shut the hut’s door on the cold and snow outside. Already I could hear the crackling of the fire, see the steaming teapots and feel the soft flannel of my dry shirt. And my pipe – I could sense it there in my pocket. Everything would be splendid, and surely we’d deserved it.

We stamped the snow off our boots and opened the hut door. And there, if you’ll pardon the expression, we saw our come-uppance. Not a strand of straw was left on the sleeping platform; all of it had obviously gone the way of all mortal things via the stove. There was no wood, and not a single blanket could be found.

So should we stay here? No, never! As we were already soaked to the skin, it wasn’t a difficult decision. We’d held out this far, and things couldn’t get any worse. So out we went again into the fog and snow. Down to La Grave, our final destination! But where to find the way? We went quickly down over the glacier and thought we could see an old track here and there. But then the glacier broke up with crevasses, while the fog lowered and the wet snow kept falling. We didn’t want to get lost on this unknown glacier and chose instead to continue our descent via a rock ridge on its right bank. So we worked our way downwards, lower and lower, over loose rock, ledges and gullies. At last, the fog lifted or rather we came out below it. To our great relief, we could now see the end of the glacier right below us. As quickly as we could, we trundled down the slope and could finally put the wet rope into a rucksack. Then we rushed down into the valley over snowed-up grass and screes. Snow had fallen until well below the level of the glacier tongue.

At half past eight, we arrived in La Grave. At the hotel we got rid of our dripping wet clothes and wrapped ourselves in blankets, tying them together with our braces like a monk’s cowl, and enjoyed a delicious victory feast in our clients’ room.

In the morning, La Meije shone white in the sunshine.

Translated from the original German text of Samuel Brawand (1898-2001), alpine guide of Grindelwald, Switzerland. As a guide, Brawand is best known for his first ascent of the Eiger’s Mittelegi Ridge in September 1921 together with Maki “Yūkō” Aritsune as his client. Originally entitled Stürmische Fahrt Zur Meije; the memoir was collected in the anthology Schweizer Bergführer erzählen (Stories from Swiss mountain guides), Orell Füssli, Zurich, 1950. Appropriately, the translator happened across this book at the remote SAC Grialetsch Hut during the annual geezers’ ski-tour.
Posted by Project Hyakumeizan at 6:39 PM