“The Muro-dō is in a most wretched condition”

Tate-yama is the name given to the lofty summits lying on the eastern border of the province of Etchū, and which, together with the jagged peak of Tsurugi-dake, form the northern extremity of the most considerable range of mountains in Japan. The highest of the peaks (Go-hon-sha) is about 9,500 ft. above the level of the sea.

The main ascent leads up the western side of the mountain from the hamlet of Ashikura, which can be reached either from Kamidaki or Harimura (see p. 315). There are no inns, but good accommodation can be found at the house of Saiki Masanori.

In a grove of trees close by is situated a small temple dedicated to Ariyori, the hero who first succeeded in ascending Tate-yama. After death he was deified and to the present day pilgrimages are made to the mountain, which is still sacred to his memory. His grave stands close behind this temple within a small railed enclosure. It differs from the ordinary style of grave, being a mound about 8 ft. square, built up to a height of 4 or 5 ft. with stone-faced sides.

On the top of this mound grows a small evergreen called shirokake. The temple, name Ōyama no jin-ja, is simply an unpretending wooden building. It contains a shrine of red and black lacquer ornamented with the crests of the family of Ariyori and of the former dai-mio of Kaga. The ceiling consists of square panels, on which are painted various designs of birds and flowers.


The road up the mountain at first winds along the r. bank of the Jō-gwan-ji-gawa, and crossing a rapid stream which flows down from the Sho-mio taki, a cascade of some considerable height on the slope of Tate-yama, reaches the Zai-moku-zaka, where commences the actual ascent, which at first is extremely steep, in many places up almost precipitous rocks.

The trees of this part of the forest are singularly magnificent. Some well-formed hexagonal columns of andesite over which the way passes are the subject of the following legend. Ages ago, when the original Tate-yama temple was being built, a quantity of timber had been cut and prepared on this hill to be brought down, but a woman who had ventured up carelessly walked over the prostrate trunks, which immediately changed to stone. The name of Zai-moku-zaka, 'Timber Hill,' was bestowed on the place in consequence.

Near the top of this hill from an opening on the l. the Shō-miō-taki can be indistinctly seen through the trees. For upwards of 3 ri beyond this point the ascent is very arduous, especially after heavy rain, when the path is little better than a track of liquid mud, in most places more than a foot in depth. Occasionally deep pools, decayed roots of trees, branches and other rotten debris add their quota to the difficulties. Emerging on to a plateau, and continuing for 1 ri, the path from the baths of Riū-zan-jita falls in on the r. (see p. 315).

Higher up the road ascends the rocky beds of several small streams, and passes r. a large flat block of stone, supported vertically and called kagami ishi (mirror rock), beyond which, on looking back, there is an extensive view of Etchū with its numerous rivers, of the promontory of Noto and of the sea, and nearer, of the Yu-gawa valley. A little further on a narrow path on the 1. leads to a point from which a distant view is obtained of the Shō-miō-taki.

The road now ascends the boulder-covered side of the mountain, passes over several streams, and skirting the bottom of a snowy slope, crosses a bare shoulder to the Muro-dō (hut). During the whole ascent from Ashikura to the Muro-dō, a distance of over 20 miles, the only shelter to be got consists of 3 wretched sheds. One of them, however, about 4 ri from Ashikura, possesses a spring of good water. Beeches and huge cryptomerias are the most common trees on this mountain, but they occupy separate localities, divided off by deep ravines. Chestnuts and horse-chestnuts are also met with.

In a valley situated about 6 ch. to the 1. of the Muro-dō are the remarkable solfataras of Ō-Jigoku The road thither, after passing between two tarns, one of which, to judge from the appearance of its almost vertical sides, is most likely an old crater, reaches the brow of a hill which commands a birds-eye view of the springs. The whole valley below seems as if it were alive with bubbling pools of boiling mud and sulphur.

Descending the stony side of the hill the soft and crumbing bottom of the valley is reached. It is here advisable to be careful in picking the way, for in some places the small hillocks of sulphur over which it is necessary to pass are unbearably hot and a false step might plunge the unwary visitor into the depths of the boiling liquid below.

The bottom of the valley is broken up by two or three mounds composed of a mixture of sulphur and a white rock. Jets of steam mixed with sulphuretted hydrogen issue from clefts in the sides of these mounds, in one place with a terrific noise, and with such force as to carry lumps of the deposited sulphur 10 to 15 ft. away.

In some of the pools boiling water of a dark green colour is projected to a height of several feet, and falling back into its pit, is again thrown up with equal violence. In others, a yellowish mud is tossed about with the same activity. The temperature of these pools varies, that of the highest being 190°F. 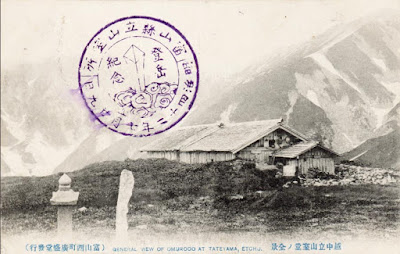 The Muro-dō is in a most wretched condition, and the traveller must not be disappointed at having to put up with great discomfort. One of the worst annoyances is the wood fire. The hut becomes filled with smoke, blinding and painful in the extreme, and it is only possible to avoid its suffocating effects by lying flat on the floor.

The hut is open for the accommodation of pilgrims during 50 days, from July 20 to September 10. No bedding is procurable, nor any food but boiled rice ....

Excerpted from Ernest Mason Satow, CMG, and Lieutenant A G S Hawes, A Handbook for Travellers in Central & Northern Japan: Being a Guide to Tōkiō, Kiōto, Ōzaka and Other Cities; the Most Interesting Parts of the Main Island Between Kōbe and Awomori, with Ascents of the Principal Mountains, and Descriptions of Temples, Historical Notes and Legends, London, John Murray. The link leads to the 1881 edition, but the text above comes from the 1884 edition.
Posted by Project Hyakumeizan at 6:36 PM