A Swiss exhibition celebrates the creative legacy of an alpinistic family

Centenaries are there to be commemorated. Some century-old stories by the Swiss alpinist and author Charles Gos have recently appeared in translation on this blog. Meanwhile, an exhibition at his home town in Switzerland is now celebrating the artistic oeuvre of the entire Gos dynasty. “Les Gos: une montagne en héritage” opened at the Médiathèque Valais at Martigny in June and runs until 16 January next year.


All four men loomed large over the alpine culture of their time. As we turn into the exhibition, an expansive panorama by Albert meets our eyes.


He learned his craft between 1870 and 1872 at the Geneva School of Art under Barthélemy Menn (1815-1893), who introduced the principles of plein-air painting into Swiss art.


After absorbing that teaching, Albert Gos ran with it. Preferring to paint in the open air, he left the school before graduating. He concentrated on painting mountains, particularly in the Bernese Oberland and the Valais Alps.

Importantly, he could make a decent living with these works. This mattered even more after 1878, when he married Jeanne Monnerat. François, the first of five children, arrived two years later (there were also two daughters). The couple settled first in Geneva before moving to Clarens, a village near Montreux.


During his most productive decade, the last of the 19th century, Albert was justifiably known as the “Matterhorn artist”. Indeed, one of these paintings features in Charles Gos’s story “Gladys”.


A painting by François Gos hangs close to his father’s work. Modest in scale, its style is a touch more modern than Albert's, as if the artist had imbibed at the same sources as Félix Vallotton (1865-1925). François studied for five years at the Geneva School of Arts and Crafts and at the city’s art academy before, like Vallotton, moving to Paris. Unlike Vallotton, however, Emil had to work in a factory as a decorative artist.


On returning to Switzerland, he gave drawing lessons in Clarens. In 1910, he settled in Munich, and later spent three years in Holland before returning to Geneva, making a living with illustration, sculpture and writing, as well as painting. Travel posters were a forte. In 1913, he helped to start up an art school in Lausanne. Like his father, he showed a predilection for the mountain world, both as a climber and a painter.

In 1918, he married Edmée de Coulon, who died in 1930. In 1934, he took over the management of the mountain books department at the Victor Attinger publishing house in Neuchâtel. He remarried in 1947, and a son was born two years later.


The Gos brothers climbed at a high standard, often without guides. Charles Gos knew everybody in the world of alpinism, from the local guides to the prominent climbers who visited the Alps from abroad. He was elected a member of the Alpine Club in 1935, and once secured a half-hour audience with the “climbing pope”, Pius XI. And this without the benefit of a Catholic upbringing - the Gos family came from a sternly Protestant background.

For his part, the youngest son, Emile Gos, completed an apprenticeship as a photographer in Montreux, in the workshop of Rodolphe Schlemmer (1878-1972). He continued his training in German-speaking Switzerland, in Paris, Munich and London before moving back to Clarens and later starting his own studio in Lausanne. In 1939, he married Claire André, who gave him two children. 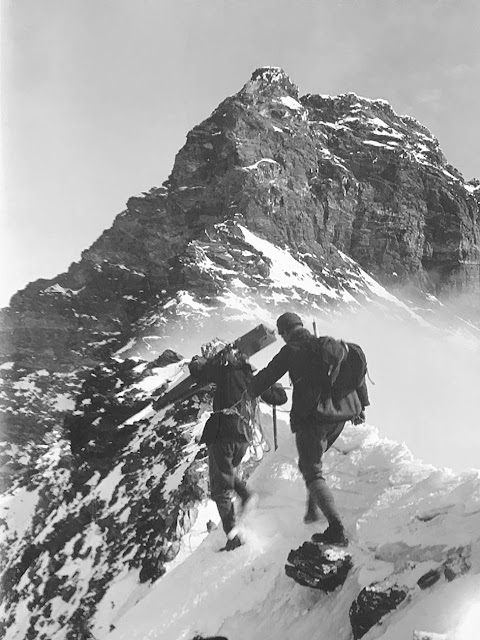 Making a living with studio portraits and newspaper photography, he left a more durable legacy in landscape and mountain photography – sampled in the exhibition by a compelling slide show of his medium-format images. 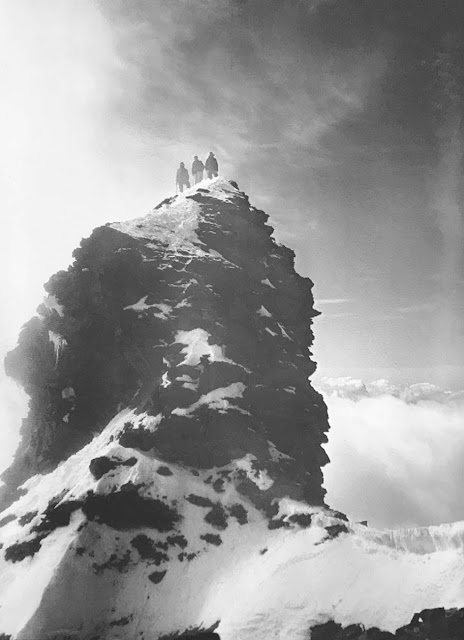 In 1922, he filmed his brother Charles’s short story about the Matterhorn cross (“La Croix du Cervin”). This was one of the first films to be shot in the high mountains. Alas, only fragments of the original footage have survived.

On the way out, we pick up a copy of the well-produced brochure that accompanies the exhibition (CHF 20, including both French and German versions of the text, with photos). 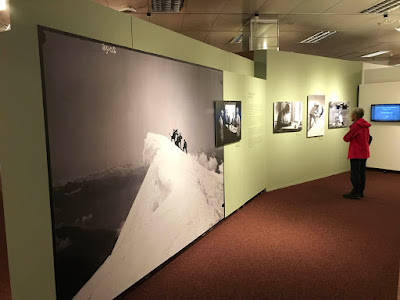 An article by the art historian Maéva Besse points out that, in its day, the Gos family was by no means unique in passing the torch of mountain culture from father to son. On their own doorstep, there were the Töpffers and the van Muydens of Geneva, whose artistic productions spanned two generations. And, over in Chamonix, the Tairraz and Gay-Couttet clans presided for even longer in the world of mountain photography.

Even so, the truly golden age of the mountain artist may have ended with the first world war. From the biographical sketches given in the exhibition brochure, one surmises that François and Emil Gos had to scrabble harder than their father to eke out a living from mountain art.


As for Charles, his fiction dwells frequently on human fallibility and the dark side of mountaineering, even while recreating the glittering social and alpinistic scenes of the belle époque. And one non-fiction work concerns itself entirely with mountain accidents. This might signify no more than a saturnine streak in the author's personality. Or was he oppressed by a sense that the civilisation he grew up in, and its genial ways of living, were sliding into the abyss, never to be retrieved?