Light and Color in the Outdoors


More than the usual number of rainbows, halos, green flashes, falls of blue snow, and unusual sunsets took place today. Or they should have, given that February 12th is the anniversary of Marcel Minnaert, author of Light and Color in the Outdoors.

I first came across Minnaert in the Physics section of a Tokyo bookshop. The gaudy sunset on the cover caught my eye. I leafed through the book. Hmm. Chapter One: why your shadow is sharp-edged at your feet and fuzzy at your head, and other subtleties; Chapter Two: why the reflection of a scene is not the same as the original, leavened by an account of a shooting competition in Austria where the competitors aim at the reflection of the target and not the target itself; Chapter Four: mirages everywhere from the icecap to the desert; Chapter Five: measuring the intensity and brightness of light, with an excursion on the opacity of forests; Chapter Ten: halos, coronas, and why the sky is darker between the primary and secondary arcs of a rainbow (see picture below) … 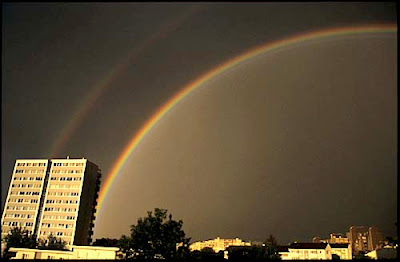 Fascinating stuff, but the tab was a staggering $80 dollars. At that price, perhaps I could afford to remain ignorant of twilight phenomena (Chapter Eleven) or lake colours (Chapter Twelve). Next day, I was back. When it comes to crepuscular apparitions, it would be a crime to keep oneself, as it were, in the dark. Fortunately, the book was still there. Soon it was propped on my breakfast table and I was soaking up fogbows, green flashes, and noctilucent clouds with every pot of coffee. (But, Professor Minnaert, is it really true that rainbows tremble and blur as the soundwaves of a thunderclap pass through them....?) 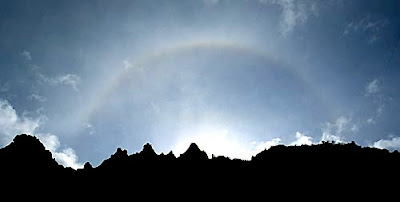 Truly, Minnaert provides a rich diet. The science - yes, with equations - is washed down with quotations from the length and breadth of European literature. Goethe and Ruskin put in frequent appearances. Schiller (from William Tell) is called up to describe a moonbow (“Yes truly/A rainbow in the middle of the night…”) Education was clearly less compartmentalized in Minnaert’s day.

Marcel Minnaert was born in 1893 in Bruges, Belgium, later moving to Ghent, where he started his university studies in biology. In 1914, he completed a thesis on the effects of light on plants. In 1915, to learn more about the physical basis of his research, he moved to the University of Leiden to study and teach physics. After the first world war, he made his name mainly as a solar physicist, contributing to the monumental Utrecht Photometric Atlas of the Solar Spectrum. He retired from the Utrecht Observatory in 1963. 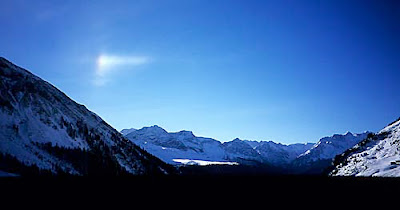 Light and Color in the Outdoors was first published (in Dutch) in 1937. It has since appeared twice in English, first from Dover and, more recently, from Springer Verlag. One reviewer on Amazon says that the book ‘changed his life’. Minnaert’s aims were more modest: “The phenomena described in this book are partly things you can observe in everyday life, and partly things as yet unfamiliar to you, though they may be seen at any moment, if only you will touch your eyes with that magic wand called ‘knowing what to look for’.” 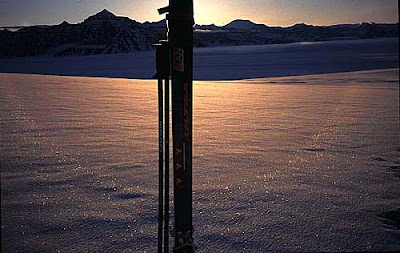 Even if the book doesn’t change your life, it can certainly change your way of looking at the outdoors. Peering out of his tent on the Greenland icecap, this reviewer saw how the midnight sun was tracing a bright parabola on the hoarfrosted snow. At last, I thought, a phenomenon that even Minnaert hasn’t catalogued. But, no, on returning to the city, I took down the familiar book and found my frost-bow in Section 176: Halo phenomena on the ground.

The Springer Verlag edition has been out of print for years, but second-hand prices on Amazon still reach $70-$80, suggesting that the book’s fame is undiminished. Maybe Springer should run off a few more, so that another generation can have their eyes touched with that magic wand of knowing what to look for.

Light and Color in the Outdoors, by M G J Minnaert, published by Springer Verlag (1993), with photos by Pekka Parviainen

More mountain and weather photos on: Flickr
Posted by Project Hyakumeizan at 8:49 PM

As a mountaineer and photographer i find your blog fascinating and a source of inspiration and wisdom.

gorgeous shots,specially when you click on the picture.... in wide frame! when i have more time , can read all about your texts, interesting blog!

Thanks for the good writeup. I happen to have his The Nature of Light
and Colour In The Open Air. The book has changed my way of looking at nature, especially with regards to light. Recently Cambridge University Press brought out a nice book Color and Light in Nature by Lynch and Livingston. This one has nice pictures of many phenomena.