What separates modern alpinists from medieval monks? When it comes to motivation, less than one might think, suggests Fukada Kyūya in "One Hundred Mountains of Japan". The excerpt below is from the chapter on Nantai, a 2,484-metre volcano north of Tokyo. 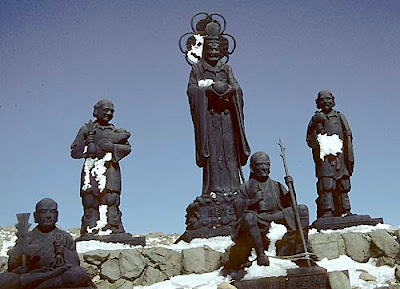 Monk Shōdō made his first attempt on Nantai in early April in the first year of Jingo-Keiun (767). He started out from the north bank of Taiya river but met with deep snow, steep rocks, and a storm. Bowing to necessity, he turned back to a place he had discovered near Lake Chūzenji. Tarrying there for a while to practise austerities, he returned to his grass hut after twenty-one days.

Fourteen years later, in early April of 781, he again set out for Nantai and was once more turned back by bad weather. Summoning up his courage anew, however, he reached the summit, as mentioned above, in March the following year. (By the modern calendar, this ascent may be supposed to have taken place some time in April or May.)

We can imagine how determined he was to succeed on this occasion. At Lake Chūzenji, he spent seven days in prayer, chanting sutras and invoking the protection of all the deities. Only then did he embark on the ascent. Having already reached the age of forty-eight, Shōdō perhaps feared that if he did not then reach the summit, he would never attain enlightenment. Such was the desire that drove him onwards.

About 1,200 vertical metres of steep and unbroken climbing separates the summit from the lakeshore. Shōdō had to find and clear the way himself. Snow still lay deep on the ground as he scrambled up through the tangled woods. Exhausted by the unending struggle, he was forced to bivouac for two nights. Then, having recouped his strength, he continued the ascent. This is how Kūkai describes his moment of triumph: "At last he reached the summit. Did he dream or wake? In his rapture it was difficult to say. He was almost beside himself with joy and grief."

Almost beside himself with joy and grief. How apposite that phrase is. How many mountaineers have experienced that strange mixture of exultation and regret when, after one failed attempt after another, they have at last stepped onto a long-sought summit. As H W Tilman wrote after his ascent of Nanda Devi in the Himalaya, "After the first joy in victory came a feeling of sadness that the mountain had succumbed, that the proud head of the goddess was bowed."

Nihon Hyakumeizan by Fukada Kyūya, translated into English as "One Hundred Mountains of Japan"

Posted by Project Hyakumeizan at 6:44 PM

many documents claimed that Shodo has opened the way to the Nantaisan summit from lake Chuzenji, in 782. According to an article of the Yomiuri Shinbun (http://www.yomiuri.co.jp/local/tochigi/feature/CO010051/20140821-OYTAT50008.html), he made an attempt from Nyohosan (is this information true ?). Is Shodo the first to have climbed Nyohosan, Tarosan and other volcanoes of the Nikko mountain range ?

Thanks for your informative articles.

Oliver - thanks for reading. It was Kukai (Kobo Daishi) who documented Shodo's ascent of Nantai, and this account is summarised in Nihon Hyakumeizan in the Nantai chapter. I would imagine that all subsequent accounts of this ascent are just adaptations of Kukai's original text. There is a translation of Kukai's full text by Allan Grappard - a look at this confirms that Fukada's summary is fairly accurate and balanced, although much shorter than the original. However, Kukai just says - as far as I can see - that Shodo climbed "Fudaraku" (ie Nantai), and says nothing about other volcanoes in the area .... Perhaps these are accretions to the original history?

Thanks for your answer,

last month, I put a question about this on the Futarasan shrine website (女峰・太郎山の初登頂: http://www.futarasan.jp/bbs/log407.html) and someone has written back that Shōdō has indeed climbed Nyōhōsan and Tarōsan but no document claims he was the first. So far, I did not succeed to find documents with detais about this but I guess those historical details are difficult to establish... Have a nice holyday !