Every year in Switzerland for the last two decades, avalanches have claimed the lives of about 14 ski-mountaineers and 7 off-piste skiers – the latter being folk who use the lifts of ski-resorts but find their way downhill outside the prepared ski-pistes. But these numbers don’t actually reveal the likelihood of an avalanche accident on any given ski-tour or ski-run. 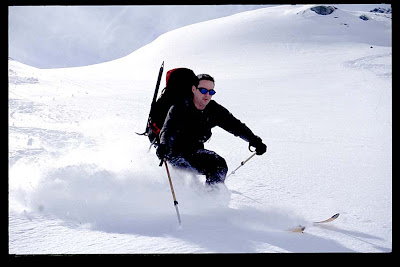 Now two Swiss researchers have attempted to answer that question. The findings of Philippe Wäger of the University of Bern and Benjamin Zweifel of the Swiss Federal Institute for Snow and Avalanche Research at Davos are published in the 2.2008 edition of “Die Alpen”, the official magazine of the Swiss Alpine Club.

Based on a limited sampling of routes near Davos, Wäger and Zweifel estimate that fatal avalanche accidents occur on about three ski-mountaineering tours out of every 100,000. For off-piste skiers, the risk is rather higher, at 10 fatal accidents per 100,000. This reflects the fact that ski-mountaineers tend to limit themselves to one mountain route per outing, while off-piste skiers use the lifts to make many different runs every day.

There is also a difference in behaviour, note the researchers. Ski-mountaineers are less likely to undertake a tour when the avalanche risk level moves up from “moderate” (Level 2) to “considerable (Level 3). But off-piste skiers are more likely to go out when conditions are dangerous.

Extrapolating from their limited sample to probabilities for the whole of Switzerland, the authors estimate that some 9 fatal avalanche accidents occur every year per 100,000 ski-mountaineering tours and 12 per off-piste run. Of course, avalanches are not the only source of danger for skiers, who can also fall victim to crevasses, cornice collapses, and icy slopes. Including these other dangers and annoyances, the accident quota rises to 17 per 100,000 ski-mountaineering tours and 20 per off-piste run.

In sum, ski-touring and off-piste skiing appear to be less dangerous than summer alpine climbing but more dangerous than rock-climbing or hiking. Another bit of news to ponder. If you thought that driving to the mountain was the most dangerous part of the trip, think again. “The figures don’t support that conclusion,” say the researchers.

Das tödliche Risiko Lawinen by Philippe Wäger of the University of Bern and Benjamin Zweifel of the Swiss Federal Institute for Snow and Avalanche Research at Davos, in the 2.2008 edition of “Die Alpen”, the official magazine of the Swiss Alpine Club.
Posted by Project Hyakumeizan at 9:10 PM