... well, do you? Strange noises on a snowslope lead to Schopenhauerian reflections

"I don't like this," said Wolfie as he started up the face of a small snowbowl. But we liked what followed even less. The snow beneath my own skis trembled and settled with a soft but emphatic "Whoomph". Fortunately, the mountain left it that. 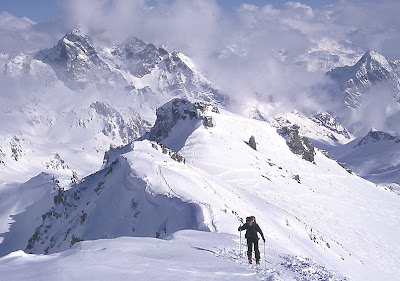 When decision-making at times like this, it can be helpful to imagine how a putative accident report will read. Like this, maybe. "On Easter Saturday, the four-person party, all foreigners, were avalanched at 2,900 metres on the Swiss side of Il Capuchin, a small peak in the Bernina massif. The two survivors admit that, twenty minutes before the accident, they heard signs of instability in the snowpack. But they decided to continue the ski-tour, putting their trust in the official avalanche forecast for the area, which stood at Grade II 'Moderate'…"

We turned back, after digging a pit to look for weak layers in the snow (inconclusive). But even before we reached the hut, we saw other people starting up our mountain, following the tracks we'd made. So far from worrying about avalanches, the members of one group were bunched tightly together. After reaching the summit unscathed, they were able to yee-haw their way down 800 metres of untracked powder snow, and all this under a flawless blue sky. Later, one of their guides reassured us that our "whoomph" just meant that the new snow was settling.

"The mountain will always be there tomorrow," said the hut warden, consoling us. True, although next morning these wise words were difficult to verify through the low cloud and snow showers. Cutting our losses, we went home. Back in town, with gear hanging up to dry over the radiators, I consulted Werner Munter about our suspect snowslope. Not in person, of course, but via his book, Avalanches 3x3: Decision-making in critical situations. An alpine guide based in Davos, Munter is an avalanche expert whose patriarchal beard reinforces his already immense authority in this part of the world. His remarks on "whoomph" noises are found in a section of his book entitled "Thirteen Deadly Errors":

Error #10: Wumm-noises are favourable signs that the snow is settling

One might just as well say that the storm is over after the first thunderclap. Wumm-noises (accompanied by a simultaneous backward settling of the snow) and cracks running through the snow when it is loaded are the most reliable indicators for a weak snowpack. In fact, they are warning signs. Wumm-noises are almost always heard immediately before a windslab avalanche is triggered. They accompany the factors that lead to the rupture within the snowpack. Each noise testifies to a further weakening of an already weakened snowpack. So these sounds should send a chill down our spines; there could not be a clearer warning!

After reading this advice, I think I'll keep turning back whenever I hear "whoomph" noises. And, by the way, that's a telling epigraph that Munter has chosen to head up his "Deadly Errors" chapter. It's not often you find a quotation from Arthur Schopenhauer in a mountaineering text book, so here it is in full: "All ignorance is dangerous, and most errors must be dearly paid for. And you need lots of luck if you plan to carry an unchastised error around in your head until the day you die."

Lawinen 3x3: Entscheiden in kritischen Situation by Werner Munter. To my mind, the best book ever written on avalanche avoidance. Available in German and French, but not yet in English. Maybe somebody should translate the rest of it.

The Essays of Arthur Schopenhauer; the Art of Controversy / Schopenhauer, Arthur, 1788-1860.
Posted by Project Hyakumeizan at 6:40 PM