“God, you must be a couple of pansies,” expostulates Wilfred Thesiger when he finds Eric Newby’s party unrolling their air mattresses. Better not to speculate what the illustrious explorer might have said had he seen us unrolling our airmats not on the rocky ground of the Hindu Kush but on the geothermally heated floor of the public facilities at Shin-Hodaka. Granted that we moderns are softies, though, it must be said that Shin-Hodaka offers Kasa-ga-dake aspirants the perfect bivvy after the long night drive from Tokyo. 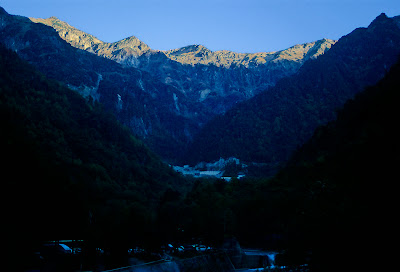 When Walter Weston came this way in 1894, one hundred years before us, he enjoyed none of these conveniences. Instead, he walked in from the other side of the Northern Alps.No wonder those Victorian mountaineers were fit. Weston, an Anglican missionary who came to Japan in 1888, had made two previous attempts on Kasa. But each time the local village chief had refused him a guide for fear the mountain gods would be offended. On this occasion, however, Weston found a bear-hunter named Ichijiro who was willing to make the ascent. The party climbed Kasa by the natural line of weakness, the great Anage sawa underneath its eastern cliffs. As recorded in Weston's book, Mountaineering and Exploration in The Japanese Alps:-

The tangled undergrowth of the dense forest, and the steepness of the banks of the torrent, forced us to take to the boulders of its bed...The time that this jungle struggle took, though only an hour, seemed more like ages, and I shall long remember it as the most trying time I have ever passed in mountain wanderings in or out of Japan. 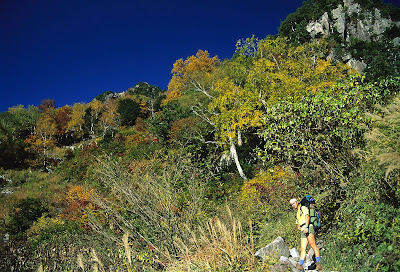 With its distinctive rainhat shape pointing heavenwards, Kasa-ga-dake has always attracted men of the cloth. According to Fukada Kyūya's "One Hundred Mountains of Japan", the first authenticated ascent was by Monk Nan'ei in 1782, from a temple in nearby Takayama. Forty years later, Monk Banryū followed in his footsteps. After reaching the top in June of the sixth year of Bunsei (1823), he persuaded some local people to build a path. On August 5 the same year, eighteen people with Banryū at their head climbed the mountain again. Then, the monk records, “As they watched a bright halo floating in the clouds, Buddha the Merciful appeared to them three times, causing them to weep tears of adoration while they paid their devotions.”

Banryū's path has long since fallen into disuse and, as for Weston's river-climbing route, the map warns that it is only for "intermediates and above". So, setting off at 6.30am while the sun gilded Kasa-ga-dake's cliffs above us, we followed an easy forest track for the first hour. Then we took the Kasa Shindo on the mountain's flank. This well-made path zig-zagged up through the autumnal woods, avoiding some rock buttresses, until it rejoined Weston's route in a large bowl at the head of the Anage stream. More or less in order of fitness, we then climbed the last steep section to the ridge and straggled in to the mountain hut's col some time after 3.00pm. By this time, Weston's party was already on its way down (the previous century), having topped out at 2.45pm. Worthy pioneers!

Like many a hiking party since, Weston and the bear-hunters had no lanterns but they improvised magnificently when they were benighted:

In Indian file, we plodded on through the pitchy darkness, with torches first made of birch twigs and then of shingles torn from the roof of a dilapidated koya (a woodcutter's shanty)...The picturesque dress of the hunters as they held aloft the flaming torches that ever and anon dropped golden cascades of sparks on the damp ground, made a striking scene. 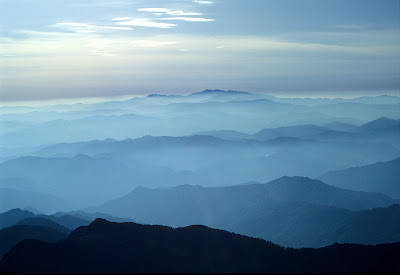 To avoid the need to vandalise woodcutters' shanties, we had brought sleeping bags. We also discovered a reserve supply of water in the rain tanks of the summer hut, which had already closed for the winter. The peak is otherwise as dry as Prohibition. 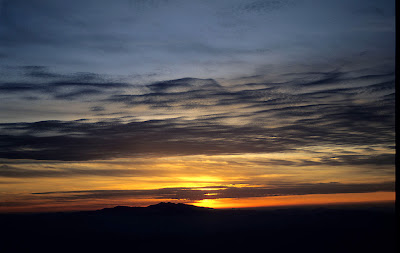 After a chilly dinner enjoying the sunset views, all nine of us unrolled our airmats in the winter hut, which is big enough for about five. Next morning, we carried on up to the peak in wind and drizzle. The weather was fitting, given that the villagers of old came up here to conduct 'amagoi', or supplications for rain after a long drought. According to Weston,

A party of hunters...as the representatives of the suffering villagers, make their way to the little shrine of the tengu...on the summit of the peak. They make a bonfire before the shrine, and then proceed to give a mimic representation of the storm they have come to pray for. Primed with sake, they fire off their guns, and with unearthly yells, roll down from the top-most ridge great blocks of andesite. As these go crashing down the cliffs, the hunters loudly invoke the attention of the tengu to their prayers. "And," one of my men added, "after a very long drought, rain nearly always follows within a few days.” 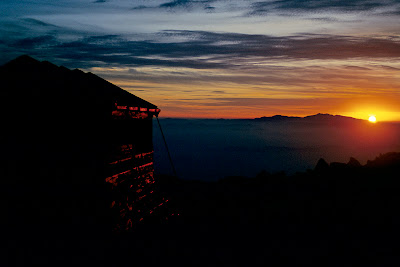 Although great blocks, probably of andesite, were temptingly to hand, we desisted from trundling them down the
eastern cliffs, which are a today a rock-climbing area. On our way back, the autumn colours were somehow even brighter under the grey cloud than under the previous day's azure skies. It was the woods, above all, that Walter Weston would remember in his closing tribute to the Japanese mountains. What better place, then, to take leave of our worthy pioneer:-

And so we bade our farewell to the Alps of Japan. They do not, it is true, display the glories of glacier-shrouded peaks, and the scale on which they are built is only two-thirds that of the famous Alps of Switzerland. But the picturesqueness of their valleys, and the magnificence of the dark and silent forests that clothe their massive flanks, surpass anything I have met with in European Alpine wanderings.

"One Hundred Mountains of Japan", the forthcoming English translation of Nihon Hyakumeizan by Fukada Kyūya

Mountaineering and exploration in the Japanese Alps by Walter Weston
Posted by Project Hyakumeizan at 9:49 PM