The snows of yesteryear

Surfing a bookshop in Tokyo, I lit on an intriguing title. Soon my wallet was ¥4,429 lighter and Ono Yugo’s “In search of the Ice Ages that only the gods saw” was propped against my breakfast coffee mug. Although glaciers no longer exist in Japan, I learned, they have left their traces all over Honshu’s Northern Alps. Professor Ono is keen on glaciers and his enthusiasm was contagious.

How would it be to traverse these mountains in search of lost glaciers? To muse was to do. Stepping blearily off the night bus in Shinano Ohmachi one Saturday, I was whisked to the top of Tateyama by the famous “Alpen Route” system of tunnel buses, a cable car, rack railway, and yet another tunnel bus – a journey which exposes the wallet to a swift round of mass wasting.

But speed was of the essence if this salaryman was to be back at his desk on Monday. At 9.20am, I was on my way across the cloud-capped caldera of Tateyama, an extinct volcano. According to Professor Ono, whose photocopied text was riding in my pack, an ice-cap 200 metres thick once covered this mountaintop. Plumes of sulphurous steam must have hissed through vents in the snow, much as they do at the summit of today’s Mt Rainier, although subsequent eruptions have removed most of the evidence. 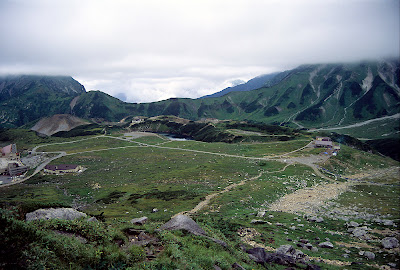 Up in the clouds was an ice-carved cirque named for Yamasaki Naomasa (1870-1929), the first Japanese scholar to put the case for ancient glaciers on Honshu. When he presented his paper to the Tokyo Geographical Society in 1902, his ideas failed to win immediate favour. For decades, academic nibs squeaked to and fro across piles of squared manuscript paper until glaciers were accepted and their proper limits set. Yamasaki clearly liked to stir things up: some years after his glacier paper, he introduced Japan to Alfred Wegener’s continental drift theory.

Yes, it’s a pity about those glaciers. They are quite, quite gone, except where the eye of faith can turn grassy hummocks into drumlins or an end-moraine. Might they have left icy relics of themselves at the bottom of the more-or-less permanent snow lurking in shady cirques and couloirs? To find out, a Nagoya University team dug into a long-lived snow patch in a cirque on Tateyama’s outer wall. This was in 1988. Pollen analysis showed its bottom-most layers fell in a snowstorm 1,700 years ago, not quite old enough for the last Ice Age.

Leaving Yamasaki behind, I popped up over the old crater rim and looked through drifting cloud onto Go-shiki-ga-hara, a plateau built by lavas of mysterious origins. (Prof. Ono has something to say about this too.) Several hours later, I started up the summit ridge of broad-backed Yakushi. The clouds were now starting to break up, letting through the rays of a late-afternoon sun. Suddenly, a podgy little shadow appeared alongside my own. Looking down into the slanting glare, I saw a snow ptarmigan waddling along beside me, almost huffing and puffing in its efforts to keep up. This solo hike was becoming quite sociable. 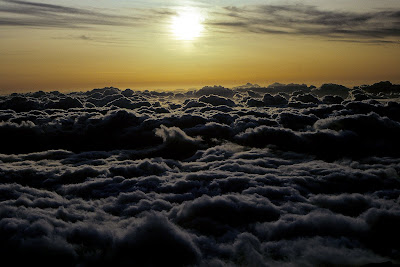 Below, woods fell away in bear-haunted promontories into a lambent sea of clouds. The sun was nodding towards the far-off cumulus tops, but there was still time to take a look into the sweeping coire on Yakushi’s east face. Down there, deep in the shadowed bowl, was a snowpatch. According to Professor Ono, the little Ice Age from about 1300 to 1850 might have been cold enough to revive a mini-glacier here. 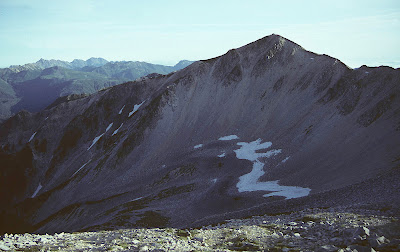 At 2,926 metres, Yakushi’s stony top is one of the highest in the Northern Alps. It was chilly up here on this late August evening, but not cold enough to sustain even a mini-glacier. During the last Ice Age, say the savants, cirque glaciers could have formed at around 2,600 metres. Today, though, you would have to raise Yakushi to more than 4,000 metres – almost as high as Mont Blanc – before it could don an ice-cap. That would be the height of the equilibrium line, at which a glacier starts to fatten itself on each successive snowfall.

Even today, there is no shortage of snow. From Yakushi’s summit shrine, set in a field of frost-shattered slabs, one looks westwards to an empty horizon. There is nothing out there to stop the wind, cooled by its passage over Siberia and charged with moisture from the Japan Sea, until it reaches these ramparts and unburdens itself in storm after storm. But the snow cannot reinforce itself from one season to the next. And, year by year, the equilibrium line drifts invisibly higher, like a balloon floating out of a child’s reach. 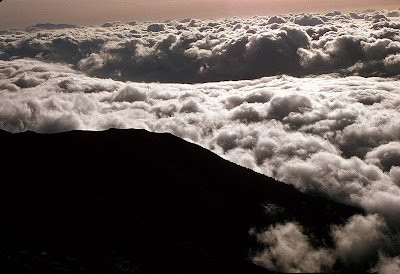 The sun sank into the clouds; it was time to move on. By the light of a head-torch, the path down Yakushi’s southern ridge is hard to distinguish from the bouldery streambed that it sometimes follows. The warden of the Taro-daira hut was unimpressed by my late arrival. “The gaijin always seem to run things out,” he said. But his hospitality and supper were excellent.

Next morning, frost pillars pushed out of the earth by the path and a crinkled skin of ice over the puddles reflected the dawn sky. Summer is short up here. The chill lasted until I’d climbed to the rim of Kurobegoro-dake. Then the path led downwards into the warm and sun-filled amphitheatre on the mountain’s east side. It is this feature that Fukada Kyuya celebrates in his “One Hundred Mountains of Japan” (Nihon Hyakumeizan):-

Even in high summer, snow is apt to lie along the steep path down from the shoulder into the cirque. Seen from its floor, this feature is truly impressive. The blue sky spans the high surrounding walls like the vault of a cathedral. Splendid scenery is not uncommon, but this is a unique splendour. Nowhere else gives one such a strong sense of standing on the floor of a cirque. 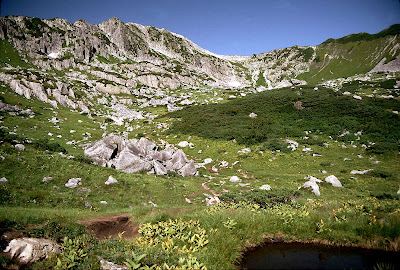 With its horseshoe ridges enclosing a sheltered coire, Kurobegoro has kith and kin all over the world. Ben Nevis and the Snowden Horseshoe are just two of its relatives. But it is pretty much unique in Japan’s Northern Alps, suggesting that glaciers never caught on in a big way here. If they had, come to think about it, this hike would not be practicable, at least within a two-day timespan. Glaciers on a Swiss or Arctic scale would have carved great gaps between the mountains and it would be impossible, as I was doing, to run lightly along a continuous high ridgeline for 40 kilometres. 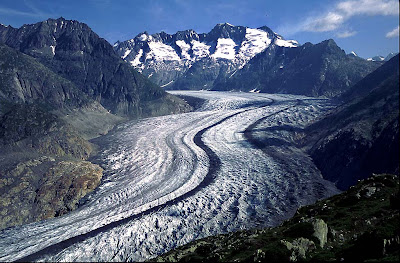 Further on, while crossing the slopes of Mitsumata-renge, the path picked its way through a field of hummocks that looked like a herd of comatose green buffalo. According to Professor Ono, these are nothing less than buried roches moutonnées – boulders coiffured into forms like Mozartian periwigs by the grinding action of the glaciers. I downed a quick cheese butty at Sugoroku col, a place once buried in ice as deeply as Switzerland’s Jungfraujoch is today.

Looking back from this vantage point 10,000 years ago, one would have seen a string of small cirque glaciers. They would have glittered like pearls haphazardly strung along the tawny braid of mountains. They even have names, conferred posthumously, of course. There was a glacier in Tsurugi-sawa, in Chojiro-dani, in Kinsakudani, there were several on Suisho-dake or ‘crystal peak’, surely an auspicious place for ice formation. Shirouma had a glacier, and so did far-off Yukikura, whose name means “treasury of the snows”.

It was time to address the Nishikama ridge, which leads up to the cheerful little chandelle of rock known as Yarigatake. This would be the last uphill stretch. In the Ice Age, Yari was a nunatak – much like the Matterhorn – surmounting glaciers that swept out in four directions. There was no time to visit the peak today. Some 22 kilometres separate the hut underneath Yari from the Kamikochi bus stop, and the path leading down the Yarisawa gorge was already in shadow. I hurried on.

Before its demise one warm September afternoon several millennia ago, the Yarisawa glacier was one of Japan’s mightiest ice-streams, reaching almost half way to what would later become the bus stop. Even in modern times, the gorge’s deepest recess has sheltered a snowpatch so long-lived that local mountaineers call it ‘the glacier’. Or used to. I noticed in passing that the snow had completely vanished this summer, leaving only bleached boulders behind. There was probably a sermon in these stones but, alas, no time to ponder it. In Kami-kochi, the bus would be waiting, engine running to keep the airconditioning on.

Fukada Kyuya’s Nihon Hyakumeizan, soon to be published in translation as “One Hundred Mountains of Japan”

Kamigami no mita Hyogaki e no tabi (In search of the Ice Ages that only the gods saw), by Ono Yugo with photos by Omori Koichiro, Maruzen, 1991

Classification and characteristics of the distribution of glacial landforms in the Japanese Alps, by Tatsuto Aoki, Japan Journal of Geography, 2002
Posted by Project Hyakumeizan at 6:14 PM

Hi! I got the link to this from Chris. He read my post about meeting Ohmori Koichiro, the photographer for the book you mentioned. I picked up that same book at the library a few weeks ago. Did you read the part about the last remnants of glacial ice in the cirque between Masago and Tateyama's Fujioritate? I am planning to order a copy of the book myself.

This was an excellent read as always. I don't know if my writing is so dry and dull because I concentrate too much on telling the story without adding colour or I am usually doing my writing after 11PM and fighting sleep.

I wrote a post on my most recent WordPress site about glaciers in the North Alps. It's not nearly as beautifully written as yours but if you have a chance, I would be honoured if you took a peek.