The Subaru’s headlights seemed to be dimming even faster than dawn was breaking. Unfortunately, this was no illusion. Soon a total electrical failure brought us coasting to a halt on the borders of Yamagata. It was an inauspicious start to our compact edition of Narrow Road to the Deep North. 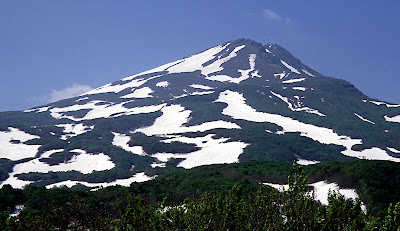 The original Narrow Road was traced in 1689 by the haiku master Matsuo Basho, who immortalised the journey in a classic travel diary. Now, our all-weather tyres were following in the prints of the poet’s straw sandals. The bold plan was typical of Yamada-san, our hard-driving leader. Starting from Tokyo, Saturday morning, we would strike northwards on the Tōhoku Expressway, rendezvous with two friends from Gunma, cross Honshu from east to west, and then ski-climb two of Japan’s more northerly “Hundred Mountains”. We would cram the 1,300-kilometre round trip into a single weekend. By comparison, Basho allowed himself five months.

Thanks to our Gunma friends, the electrical impasse was soon solved. Yamada went into Yamagata in the other car and bought a replacement battery. This let us drive the ailing Subaru into town so that its distributor could be replaced. Mobile again, we crossed the Mogami river, its roiling tide of snow-melt freeze-framed by the bridge girders as we speeded over. There was barely time to recall Basho’s haiku on this famous view (“How swiftly…”) before we started up the mountain road to Gassan, the first of our mountains.

By coincidence, our visit fell on the same day of the same month as the poet’s. Here is Basho’s account:

Wearing chain necklaces of mulberry paper to keep us free from impurity, and bleached cotton hoods, we were led by a so-called Strong Man, a mountain guide, as we climbed for nineteen miles through cloud and mist and over ice and snow until it seemed as if we too shared the very path of the sun and moon. When we reached the summit, we were thoroughly chilled and could hardly breathe. The sun had already set and the moon had come out. Making ourselves a bed of bamboo grass with twigs of bamboo for a pillow, we lay down and waited for the dawn. (tr. Dorothy Britton) 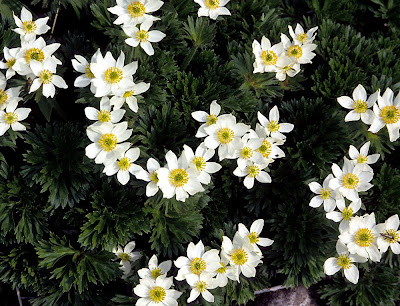 Our own ascent was, by necessity, truncated. We took a chair lift to gain the shoulder of the mountain and then walked up higher, through banks of alpine flowers. Having skis, we were able to avoid a bamboo grass bivouac by a quick run down a snow-filled gully. The lower slopes, which belong to the ski resort, were hazardous with fluorescent-clad youth bashing down the slushy moguls.

Driving down to the Japan Sea coast, we found a campsite in a pine grove just north of Sakata. A barbecue ensued; fortunately, there was only one other camper, a lone motorcyclist, who crawled out of his tent to complain about the noise and was promptly invited to join in. Next morning, we drove through Kisakata on the way to our next mountain. There was no time to stop and, in any case, the beautiful lagoon described by Basho ceased to exist after the 1964 earthquake jolted the entire coast upwards. Already we could see the faint bulk of Chōkai, our second objective, soaring through the spring haze. Soaring is the operative word here, as Fukada Kyūya notes in his Nihon Hyakumeizan:-

Taking somewhat after the region's inhabitants, the mountains of the north-east come across as heavy and solid, if not downright lumpish. Chōkai, though, is untouched by this ponderousness. The mountain seems to soar. Viewed from Sakata, one would almost say that it cuts a dash. Only an isolated peak like Chōkai, no straggling ridge, could carry this off … Just to look at this mountain is to understand why it was venerated. The rusty, rugged summit rocks fall away into gentle slopes that merge into the surrounding plains. In days when gods were still believed to walk abroad in the mountains, this grace of form combined with a hint of menace must have inspired awe in men's hearts.

Pressing the pedal a fraction closer to the metal, we urged our Subaru upwards along the road that takes the mountain’s north-easterly ridge. For the last few kilometres, the fresh green foliage of old beech woods shaded the way. The car park lies at about 1,000 metres, just under half-way to the summit. When Fukada Kyūya climbed Chōkai before the war, he had to address every one of its 2,236 metres. Yet this was no loss, judging by the account the Hyakumeizan author gives in his magisterial “One Hundred Mountains of Japan”:-

I first climbed Chōkai from Fukura. We set off from this fishing village after visiting the vast stretch of sandy beach remarked by Tachibana Nankei in his Tōyūki at "the dunes of Fukura". Nowadays, a motor bus whisks you to the mountain's midslopes. No road of that sort then existed and so we started our climb at sea level. After reaching the summit on skis – it was mid-April – we swept down through the larch woods, with the deep blue of the Japan Sea looming ever closer through the tawny billows of the tree-tops.

Leaving the cars, we crossed a small marsh where the mizu-basho (skunk cabbage) were blooming before clipping into our skis for the climb. Most of the way was over reaches of smooth though grubby snow – the spring winds waft over dust from the mainland – but twice we had to struggle through spiky hedges that divided one snow patch from the next. Sooner or later in Japan, ski-mountaineering ends in a tussle with bamboo, creeper, and tendril. Four hours of sweaty labour later, we reached the northern crater rim, and sat down for lunch. The views were lost in the haze but one can refer to Hyakumeizan to fill in the gaps:-

I stood on the summit on a crystal-clear autumn day. We'd left the Komadome hut so early that the sky was still full of stars, with the Big Dipper, like a portent, hanging vertically above the ink-black ridge we were aiming for. The darkness became less palpable, as if shedding layer after layer, and we arrived at the Ōhira hut in full light. We climbed into the morning sunshine on the steep slope of Tsutaishi-saka. The autumn colours on the mountainside below us were beautiful beyond words. Hiding the lower world from view was a sea of clouds on which floated the graceful yet crisply limned shape of Gassan … As we climbed higher, more of Tōhoku's mountains hove into view, among them Iwate, Asahi, Iide, and Zaō, rising like islands above the cloud sea. 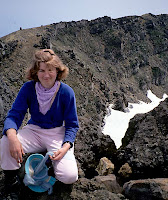 The rocks on which we were sitting looked scorched. Unlike Gassan and other retired volcanoes on the Japan Sea coast, Chōkai has erupted quite frequently during historical times. In March 1974, it sent a pillar of smoke and ash into the air, breaking a silence of one and a half centuries. In the middle ages, records Fukada Kyūya, the imperial administration responded to each of the mountain’s periodic outbursts by promoting its tutelary deity to a yet higher rank in the court hierarchy.

Today, there was only a minor eruption as Ohbayashi-san opened a can of beer that had been well agitated during its rapid passage from Gunma. There was no time to explore the summit area, with its pretty crater lake; the workmen alpinists would soon have to address the long drive back to Tokyo. As we skied down, a halo around the sun in slowly approaching veil cloud heralded the arrival of a Japan Sea front (“here in the North it is rarely possible to say whether it will be fine or cloudy on the morrow,” says the local meteorologist quoted by Basho) and, indeed, we found ourselves heading south towards Niigata under a characteristically gray sky.

After an onsen dip and dinner at a yaki-niku restaurant that rashly advertised all you can eat for ¥1,000, we passed through the Niigata toll gate to the KanEtsu Expressway at midnight. We still had many hours to go to Tokyo when a front tire burst on Yamada’s Subaru. The promised rain had now arrived, and we hastily unloaded all the packs in order to get at the toolkit. It was already Monday morning and there was not a moment to lose if we wanted to be in time for work, a point of honour among workmen alpinists. We were driven in those days. 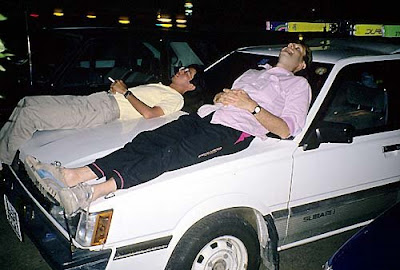 Area Map No. 36 Chōkai-zan, 1989 edition, with introductory notes by 池田昭二
Posted by Project Hyakumeizan at 10:06 AM

beautiful blog... truly amazing experience I'm feeling it must have been...