Volcanism and a mountain faith endure on Japan’s ‘August mountain’

Turning our backs on the hubbub of the ski resort, we moved towards the torii. Through its pillars we saw a snowy track leading towards the shining bulk of Ontake. We passed as if through a gateway to another world.

That, of course, is exactly how generations of pilgrims have seen this 'August Mountain', the centre of a durable religious tradition. Before 1945, Ontake-kyo was one of the thirteen officially recognized sects of state Shinto. In the past, relates Fukada Kyuya in “One Hundred Mountains of Japan”, holy mountains were legion, among them Fuji, Chōkai and Tateyama, to name but a few. 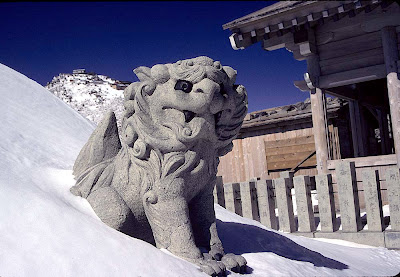 Yet their sacred aura has dissipated in the light of modern mountaineering, Fukada continues. Ontake alone retains its bands of pilgrims, their rituals and their customs. If you climb the mountain on a summer's day by its front route from Ōtaki and Kurosawa, the white robes of the faithful, among them both children and greybeards, will even now limn out the path ahead. These people are not climbing the mountain for sport. I know the owner of a teahouse who would otherwise take no interest in mountains, yet never fails to make her annual pilgrimage to the top of Ontake. 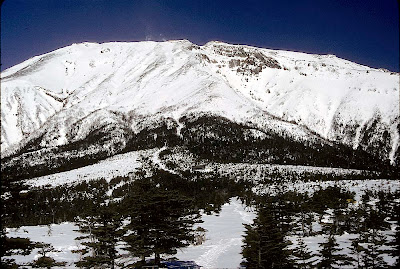 In March, however, there was nobody to be seen on the mountain except our party of three. We started skinning up an icy couloir – icy enough to enforce respect, it proved, as O-san, who lacked ski-crampons for his new light-weight boards, slid away downhill. Fortunately he ended up in a patch of creeping pine, not much the worse for wear. We carried our skis the rest of the way up to avoid another toboggan-run. Mt Fuji started to peep over the rim of the Central Alps behind us as we climbed higher.

When Walter Weston came this way in the summer of 1894, the Ondake faith stood at its meridian. As an alpinist and Anglican missionary, Weston took a professional interest in mountain religion, devoting a whole chapter of his book to this side-trip from his end-to-end traverse of the Japan Alps. Near the summit shrine, the three-man party witnessed a group of pilgrims in communication with the world beyond:

Closing his eyes, the nakaza (medium) sat silent and still. His companions broke out into a subdued chorus of prayer. Soon the face of the medium began to turn a livid hue. Unearthly gaspings issued from his throat, and the gohei (ritual wand) trembled and shook violently in his hands. His eyes turned upwards in their sockets until only about half the iris was visible. A series of convulsive jerks at length brought the gohei to a standstill above his forehead. This was a sign that a god had come. Thereupon the maeza, a pilgrim who had been all the time acting as a sort of precentor to the rest, bent reverently towards the medium. With his forehead lowly bowed on the rock between them, he inquired the “honourable name” of the august visitor who had now replaced the personality of the medium by his own presence. In a hoarse whisper came the reply, “I am Fukan Reijin.” This was the posthumous name of the canonized mountaineer who, exactly a century before, had made the first ascent of Ontake from the Odaki side …

Pilgrims still thronged the mountaintop and there was “no shortage of trances” when Carmen Blacker, a Cambridge anthropologist, made the first of three visits to Ontake in the 1960s. But a “devastating change” awaited her on her last field trip, in August 1967. A road had been driven up to the mountain’s seventh station and a “streamlined concrete structure” had replaced the huts at Tanohara, where the pilgrims used to break their ascent. “Very soon, I was confidently told, there would be a téléférique ‘ropeway’ to the top of the mountain. No one would then have to climb at all, and the craters would be filled with teahouses, from which cheerful amplified music would banish loneliness. Eventually the trances would disappear and Ontake would join the company of those other erstwhile holy mountains where only … the odd inscribed stone survives to remind the lay climber that, in the past, the ground beneath his feet was considered so holy that only the duly purified might tread there.”

Mountains have their own agenda, though. In October in 1979, Ontake threw a tall pillar of smoke and ash into the sky, as if to warn off the téléferique and teahouse builders. The powerful but shortlived eruption was the first ever recorded on the mountain. And this explained the roar that now started to prevail over the noise of the wind and the swish of our skis on the snow. As we reached the ridgeline, passing the lion-dogs of a shrine half-buried in snow, we saw a shallow crater from which three pillars of steam jetted into the deep blue of 3000 metres. 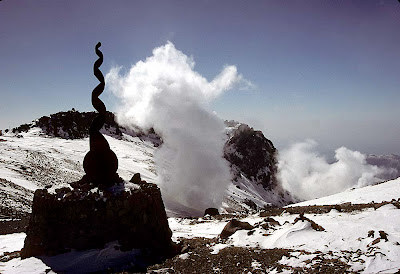 Nearby stood an enigmatic monument, comprising a bronze orb surmounted by a lightning bolt or perhaps a corkscrew. It was unclear whether this stele pre-dated the eruption or was put here to commemorate it. Like the shrine buildings, it looked well maintained, suggesting that the Ontake faith lingers on, banked up like the mountain’s inner fires. Indeed, the Ontake-kyo website lays claim to more than half a million adherents and our guidebook assured us that, although “the number of pilgrims is ever fewer, as age takes its toll, in high summer you can still see their lights winding from the foot of the mountain to its summit.” Truly, as Fukada Kyuya writes, this mountain has unsuspected depths and heights. We paid our respects at the summit shrine and turned for home.

Nihon Hyakumeizan by Fukada Kyuya, in the forthcoming translation as “One Hundred Mountains of Japan”

Mountaineering and Exploration in the Japanese Alps, by Walter Weston

The Catalpa Bow by Carmen Blacker 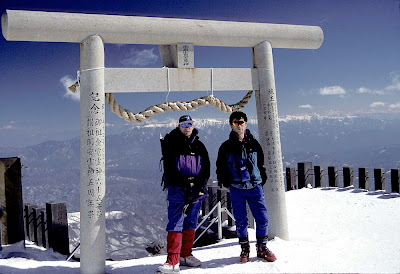 More about the 'de-sanctification' of Ontake on In the Pines
Posted by Project Hyakumeizan at 6:15 PM