A hound does the round 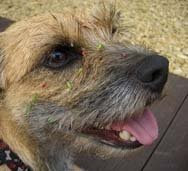 Despite the evidence of her name, Hana is a border terrier of British origin. Now she lives in Tokyo and takes her master up the Hundred Mountains of Japan, one by one. If this stretches credulity, please refer to her website and blog. Strange to say, though, Hana is not the first dog from England to climb a Notable Mountain of Japan. For that honour surely belongs to Toby, who ascended Mt Fuji in the company of Her Majesty’s Consul-General to Japan, Rutherford Alcock, in 1860.

Alcock, it will be recalled, was sent to the “Capital of the Tycoon” to assert his government’s rights under the new treaty with Japan. In the summer after his arrival, he resolved to make a tour of the country, starting with a “pilgrimage to Fusiyama”. Topping out on the famous mountain in July, Toby and Alcock therefore became, respectively, the first terrier and foreign dog-owner to make the ascent.

How evanescent, alas, are summit joys. After their triumph on Fuji, master and dog made their way to the hot-spring resort of Atami. From their lodgings, they set out to view the Oyu geyser, famed for “shaking the earth with its vigorous blasts”. And there hapless Toby strayed over the vent just as the geyser erupted in a paroxysm of scalding water and superheated steam. A modest stone still stands on the spot today, reading simply ‘Poor Toby, 23 September 1860’. 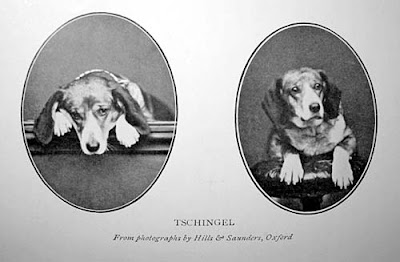 The memorial is no more than he deserves. For Toby could lay fair claim to being the first canine alpinist, at least in the English-speaking world. His climb predated by at least half a decade those of the illustrious Tschingel. The latter was a “small bloodhound or a large beagle” given to W.A.B Coolidge by the guide Christian Almer after a failed attempt on the Eiger in 1868. Over the next decade, master and hound went on to notch up a total of 66 alpine peaks and passes together, including several 4000-metre summits in the Bernese Oberland. They even went back to the Eiger and got up it.

Is it safe to take your dog climbing? Tschingel’s first great climb, the Blümlisalphorn (12,044 feet), was nearly her last. “She was very tired,” records Coolidge, “and her paws were cut by the ice – this often happened, but she would not be left behind … on the final slope she slipped, being still an inexperienced climber, and began to slide down the snow slopes toward the Oeschinen lake, but was luckily rescued by one of our porters, who caught hold of her collar in the nick of time.”

Later, though, Tschingel developed a strong set of alpine skills. On one steep and crevassed glacier, she went ahead as usual, smelling at doubtful spots to see if the snow bridges were strong enough to bear her “for she had a marvellous instinct for avoiding crevasses … The guide, seeing with what skill she found the way, cried out all at once, ‘Let us follow the dog!’ and so we did.”

For all her epic peaks and passes, Tschingel died in her sleep in front of the kitchen fire at home in Dorking on June 16, 1879. And so we wish Hana, the Tschingel of Heisei, a similarly long and storied career among the Hundred Mountains of Japan.

For the story of Tschingel, see Alpine Studies by W. A. B. Coolidge

More about the tragic tale of Toby
Posted by Project Hyakumeizan at 5:29 PM

I've been following Hana's journey with interest, and was fascinated to learn about both Toby and Tschingel.

There's one other dog I know of who is active in Japan's mountains - Lloyd, who joins Damian on some hardcore backcountry ski routes around Hakuba (http://steepdeepjapan.com/tripreports/yari-onsen-with-lloyd).

You don't see many dogs in the mountains round Japan; hopefully Hana and Lloyd are showing people that getting to the mountains and owning a dog are not mutually exclusive.

Thank you for the kind introduction of Hana, but particularly for the fascinating accounts of other dogs in the mountains. The thought of Toby getting blown away in a burst of superheated steam brought a tear of sadness (OK, and laughter) to the eyes of my wife and I. We'll have to visit Oyu and pay our respects one day.

I didn't know that SDJ's Damian takes his dog with him. I got sidetracked one long evening, mouth hung open in disbelief, at his pictures and headmounted video footage of snowboarding down near-vertical precipices.

There is a solid tradition in the UK of fell-running with dogs, and there are now even a few dog+owner running races. I think it will be a while before we see that in Japan ....