Captured by the Kurobe (4)

The Kami-no-Roka continued: journey to the notional source

This was the day when we would track the Kurobe down to his source. Unfortunately, the weather wasn't going to cooperate. Without enthusiasm, we stepped out of the hut into a grey drizzle. Skeins of mist drifted through the trees. The only consolation, as we made our way upriver, was that in our wetsuits we were perfectly attired for a typhoon. 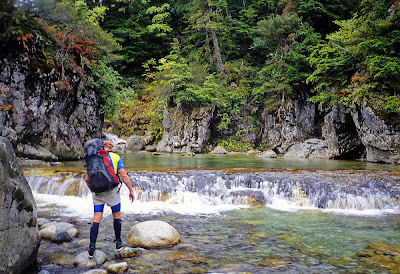 A knight’s move up and across a wet slab marked the trip's last climbing manoeuvre. It brought us to Akagi-sawa De-ai, where a large tributary flows into the main river. In fair weather, with the morning sun filtering over the top of its waterfall, this may be one of the most beautiful places on the planet. In the rain, the surrounding grove of cedars plunged it into an even deeper shadow. 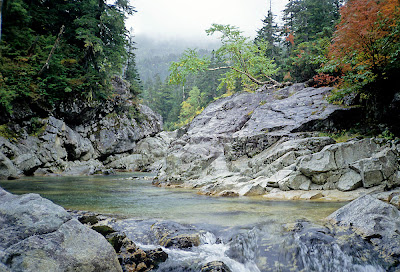 Now, leaving the gorge behind, we scrambled uphill through a maze of white boulders. According to Kanmuri Matsujiro, the view should open out here but all we could see were bales of mist rolling across aptly named Kumo no Daira, the Field of Clouds. We climbed into autumn, the foliage turning brighter shades of red and gold as we moved higher. 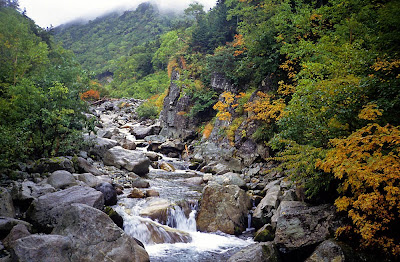 After five hours of boulder-hopping, we were no longer in a river. The once-mighty Kurobe had dwindled to a mountain stream. As if to compensate, the drizzle had now strengthened into a downpour. We came to the place where a hiking path crosses the torrent. Ahead, our thoroughfare of boulders receded away into the heart of a dark cloud. 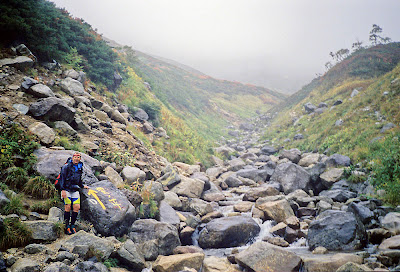 “Well, what do you reckon?” I asked Sawa Control. It was his Quest for the Origin of the Kurobe, after all. “I think we should deem this the source,” he replied with CEO-like decisiveness. After an obligatory Furthest East photo, we turned right, towards Mitsumata-renge. We reached the hut just as the downpour worked itself up into a regular storm. It was time for a cup of tea.

(Continued)
Posted by Project Hyakumeizan at 9:36 AM

My map shows that river splitting into a dozen different tributaries above Kumo-no-daira, so it must've been difficult to follow the correct 'path' in the fog and rain.

I really admire you guys for heading up to the source from the bottom. In September I was running around on Washibadake and over to Suishodake and looking at the long route I had to follow back, when some hikers I had met the day before told me there was a route around Washiba that meant I wouldn't have to climb it again. That route, as it turned out, took me down into a ravine with a small stream, the very stream that would eventually flow past the scenes in your photos and pool up behind the Kurobe Dam.

I have looked at many photos of the Kurobe River and its gorges and I have thought that someday I should try to get in there. As I believe I commented before, your words and photos are an inspiration for me to do just that.

Wes: actually, the route-finding wasn't a problem, as far as I remember. The topo from the guidebook (Tokyo Shuhen no Sawa) is clear, and it's usually clear on the ground ( or in the river) which is the main stream. But we didn't actually climb into the cloud, which would certainly have added extra challenge.

Peter: I'm glad that this account is giving you ideas - that's exactly what it's intended to do. That's also why I included the 'cautionary tale' of Sawa Control's first expedition in the first post of this series. Really, it's the river that decides whether it's going to let you climb or swim it ....

"Field of Clouds" - what a wonderful name! Some great photos there, especially with the autumn gold creeping in.
Tom

Tom: good to hear from you. In fact, you are right to seize on the Field of Clouds - the savants say that Kumo-no-daira is built on the remnant lavas of some vast but largely dessicated or do I mean disected volcano. I'm sure you can find references in the usual literature....